Home All The News Pochettino: No shame in Champions League exit 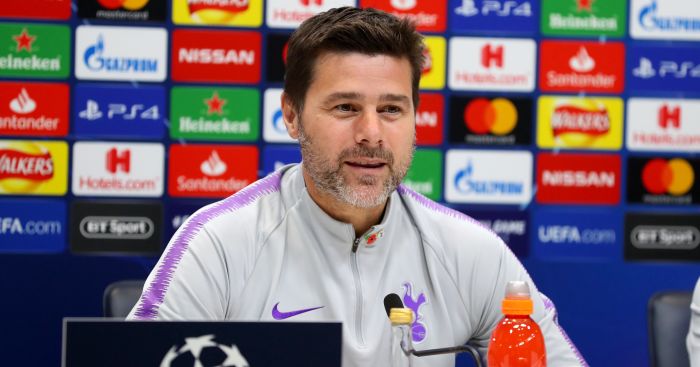 Tottenham manager Mauricio Pochettino does not think it would be embarrassing if his side were knocked out of the Champions League at the group stage.

Spurs realistically have to beat PSV at Wembley on Tuesday if they are to have any chance of extending their stay in the competition until after Christmas, with games against Inter Milan and Barcelona still to come.

They have managed just one point at the halfway point of the group stage and that came in Eindhoven in the reverse fixture a fortnight ago.

Spurs marketed their qualification for this tournament by saying the only place to see Champions League football in London this season would be in their new stadium.

However, they could have exited before they even have moved in if they do not advance from the group stages.

“When you compete at that level against Inter Milan or PSV, of course Barcelona, it is not easy to go to the next stage of the Champions League and qualify,” he said.

“If you don’t deserve to go, it’s disappointing but not embarrassing.

“We all feel disappointed because we cannot deliver the possibility of playing the Champions League in our new stadium, but it wasn’t in our hands, there were many things that complicated it. It is impossible to blame the club.

“If we are able to win tomorrow and have the possibility to go to the next stage maybe we can play in the Champions League in March in the new stadium.”

Spurs have injury concerns for the game with Mousa Dembele the latest victim following his ankle injury at Wolves on Saturday.

The Belgium midfielder will have a scan on Monday when the extent of the injury should become clearer.

“We need to wait today until after the scan to have a better idea,” the Argentinian added.

“The most important thing is he didn’t suffer an injury to his bone and that is good.

“Maybe his ligament is damaged but we need to know, after the scan we will know better.”

This mini-crisis is the latest problem in a long line for Pochettino, who has recently said this season has left him feeling his lowest while at Spurs.

That is in part due to the stadium delays, not signing any players in the summer and nine of his players returning back from the World Cup just six days before the start of the season.

The former Southampton manager revealed he has been able to take his mind off his problems by getting engrossed in a box set of a political thriller.

“Yes it’s a weird season but I look so happy now because the new season of House Of Cards has started,” he revealed. “Yesterday I watched three episodes. I learn a lot from this series. I recommend it.

“I think it represents very well sometimes how we are. Sometimes football is so political, and it’s going in this direction.

“Which character am I? I don’t know, it’s difficult to say. It’s dangerous to say this or this one. It’s fiction but it can translate to many businesses.”