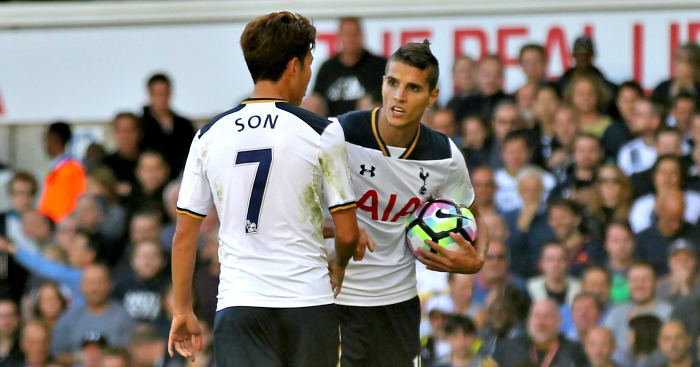 Mauricio Pochettino has played down the disagreement between Erik Lamela and Son Heung-min on Sunday.

Pochettino watched his Tottenham side perform excellently in inflicting upon Pep Guardiola his first defeat as Manchester City manager. Make sure you read 16 Conclusions on the game.

An Aleksandar Kolarov own goal and a Dele Alli strike handed the north London side a two-goal lead at half-time, and an excellent defensive performance ensured a clean sheet and all three points.

The only potential negative for Pochettino was Lamela and Son’s argument, with the former taking a second-half penalty despite the South Korean trying to take the ball from him.

Lamela’s penalty was thereby saved by Claudio Bravo, but Pochettino has played down the issue.

“It happens in all teams,” he said. “Everyone can miss a penalty. We will analyse, but it is not a big issue.

“Lamela, Sonny, [Christian] Eriksen. … At the moment, it’s who feels better to shoot. Two players wanted to shoot. That’s always better than nobody wanting the ball. They decided to be brave.

“Maybe the next one if Son is on, and Lamela too, maybe he says ‘now you give me the ball.’ The only one who shoots can miss the penalty. If Sonny missed, not Lamela, we talk in the same way. There’s no issue.

“When we prepared for the game, two, three, four players can take [penalties]. Harry Kane is the first and then we pick a two, a three. But different things can happen on the pitch and the players can say ‘I’m confident’ and then discuss. They are allowed to discuss and then take the decision.

“It’s difficult from the touchline because they’re fighting and I cannot run to the middle of the pitch and say ‘no you.'”