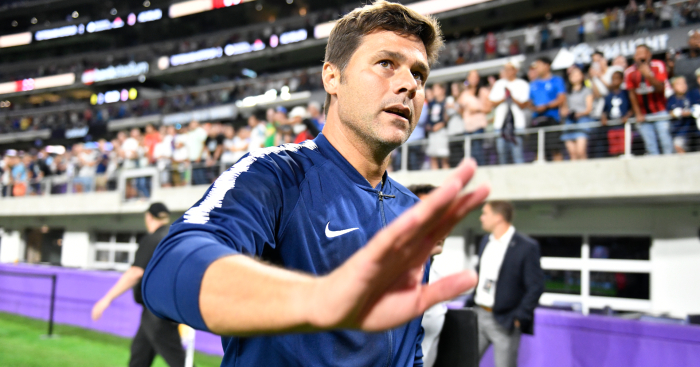 Tottenham boss Mauricio Pochettino thinks the club’s future looks bright after they rounded off their United States tour with victory against AC Milan.

Georges-Kevin N’Koudou scored the only goal as Spurs closed their International Champions Cup campaign with a 1-0 win in Minneapolis.

Pochettino’s side have beaten Roma 4-1 and drawn 2-2 with Barcelona – a match they then lost on penalties – despite missing most of their first-choice XI due to World Cup exploits.

Davinson Sanchez started the game while Christian Eriksen and Son Heung-min came off the bench, but none of the club’s nine players involved in the World Cup semi-finals have been involved on the tour.

In their absence, the likes of development squad players Luke Amos, George Marsh and Oliver Skipp have all taken the chance to impress Pochettino.

“I want to congratulate all the academy coaches and staff,” Pochettino told Spurs’ website. “They need to feel very proud about the youngsters. They behaved really well, performed fantastic.

“I think they showed a bright future in our academy and they showed that the job that they are doing in the last 10, 12, 15 years, the coaches in the academy, is great.

“I want to congratulate them because the youngsters not only showed a great performance on the pitch, we feel very proud of how they behaved outside of the pitch too.

“It’s good to feel proud. They feel the club and now they need to keep working.”

Victory against their Serie A opponents on Tuesday night was secured when N’Koudou scored early in the second half.

Pochettino added: “I am happy with the performance more than the result.

“To compete against a very good side, just like Barcelona and Roma, and to gain that experience for a lot of youngsters is fantastic.”

Tottenham travel to face Girona in Spain on Saturday before starting their Premier League campaign away to Newcastle a week later.