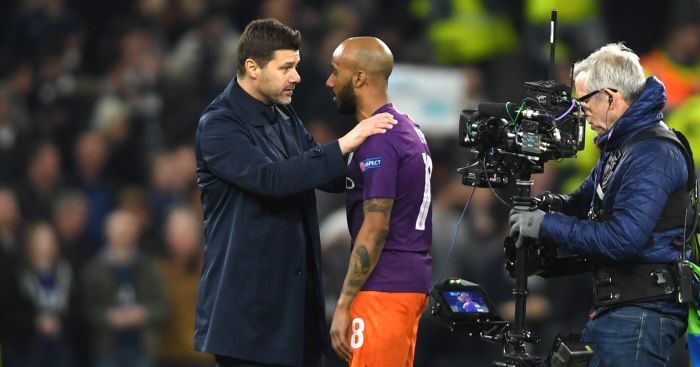 Tottenham boss Mauricio Pochettino told Manchester City’s Fabian Delph that he might count himself “lucky” to escape without a red card after a challenge on Harry Kane.

Son Heung-min struck late on as Spurs claimed a first-leg advantage in the all-Premier League quarter-final with a 1-0 victory over City at the Tottenham Hotspur Stadium.

But the gloss was taken off the success by fears their talisman Kane, the England captain, could face another lengthy lay-off with an ankle injury.

Kane rolled the joint as he challenged Delph for the ball just before the hour. To compound matters, Delph then caught him on the ankle.

Kane, who was out for more than a month after suffering ankle ligament damage in January, was carried straight down the tunnel and later left the stadium on crutches wearing a protective boot.

Pochettino angrily confronted Delph at the time of the incident and had a word with him at the full-time whistle.

When asked what he said to Delph, Pochettino said: “The first question, for me Manchester City are still the favourites and I was talking with Delph about the situation.

“He was upset and aggressive with Harry after the action and I tried to make him understand that it wasn’t intention from Harry or him to damage each other, it was just a tough action, Harry twisted his ankle, he touched the ball and then he stepped on his ankle.

“I said to him ‘you are lucky because it was checking on the VAR and technically it was maybe a red card’.

“But I think both were fighting for a ball and had no intention to damage each other.

“The conversation was very friendly. ‘Nothing more no problem between us.”