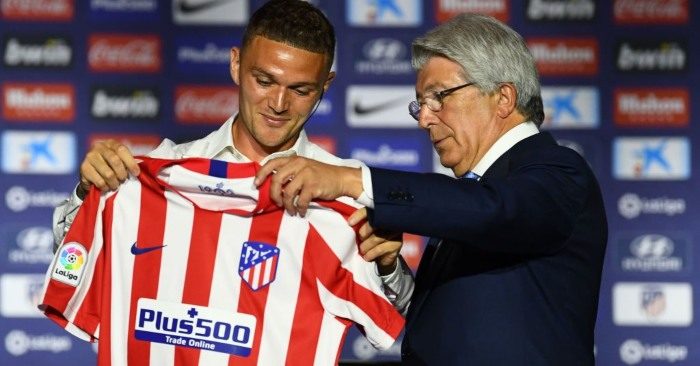 Mauricio Pochettino has played down talk of a potential rift between him and former Tottenham defender Kieran Trippier, who criticised his old club on international duty.

The England right-back departed Spurs this summer for Atletico Madrid after four seasons in a transfer worth £20million and has enjoyed a strong start to life in Spain.

It saw Trippier recalled to Gareth Southgate’s national team and he played the whole 90 minutes in Saturday’s 4-0 win over Bulgaria.

Ahead of the Euro 2020 qualifier, the former Burnley full-back opened up about his Tottenham exit and told reporters: “I had a conversation with the manager, a meeting with the chairman to see what my future was and I didn’t get the impression that they wanted to keep me.”

Pochettino dismissed suggestions there was any bad blood between the pair in his press conference ahead of Saturday’s Premier League fixture at home to Crystal Palace.

He said: “I didn’t see it, but I heard about it. I can explain how I feel. We had a conversation where he explained he was going to move to Atletico Madrid – okay nothing more.

“Yesterday (Wednesday) when Harry Kane arrived back he said to me ‘did you get Kieran’s text?’ I said ‘no’ because I changed my number. Maybe because he doesn’t have the new number.

“Because he (Trippier) believe his words were twisted – I don’t know nothing more. Kieran translated this message to me through Harry Kane. He wanted to tell me. But I’ve got no problem with Kieran.

“In football decisions happen and players move from one club to another. What happened, happened and we need to move on and he needs to think of Atletico Madrid and be happy there.

During his conversation with reporters, Trippier added: “It’s not nice when you know the club want to sell you. I heard rumours about them selling me and it’s not nice but it happens and it’s football.”

Yet Pochettino’s version of events are slightly different and he pointed out he had faith in the Bury-born defender, hence why he started in the Champions League final against Liverpool.

Trippier candidly stated throughout the 2018-19 campaign that he struggled for form, but still played 38 times for Tottenham in all competitions.

Pochettino added: “After the summer he came to see me, he asked me for a meeting and said ‘gaffer, I think I have a good possibility and for different reasons I would like to accept the offer from Atletico Madrid’.

“He didn’t ask me nothing. Only communicated whether the club were going to accept the offer. Nothing more.

“It wasn’t a conversation – you want me? Or you don’t want me? It was so clear. He played the final, when I had plenty of different options, with Serge Aurier, Davinson Sanchez, Kyle Walker-Peters. But he played the final. My actions talk more than my mouth.”

Although Trippier is no longer part of Tottenham’s team, Pochettino and his coaching staff remain proud of his development.

Before he moved to the club in the summer of 2015, the ex-Manchester City trainee had only played one season in the Premier League, but since has become an England regular, starred at the 2018 World Cup and shone for Spurs.

“We signed him from Burnley when they were relegated, bought him for £4m. He was worried about whether he would play or not play – I said to him don’t worry we are going to provide the best platform for performance,” Pochettino said.

“Later one and a half years he was in the starting XI, he reached the national team, played the World Cup and now he’s with Atletico Madrid.

“We all feel proud to help him to achieve his dream and to reach a level that he wasn’t there at before he arrived at Tottenham.