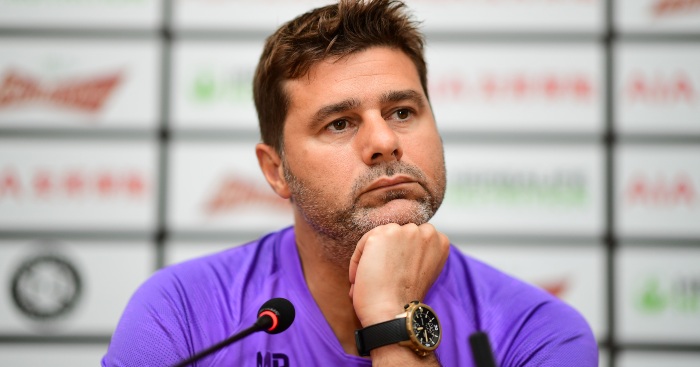 Mauricio Pochettino admits he has concerns over Tottenham agreeing to feature in an Amazon documentary.

Cameras are being allowed into the club for the 2019/20 season for the latest series of All or Nothing, which has previously focused on the likes of Manchester City, the New Zealand All Blacks and several NFL teams.

Eyebrows have been raised over the decision, given the struggles Spurs are facing this season and their difficult start to the campaign.

The Argentinian has previously said it was entirely the club’s decision to sanction it and reveals he has had worries.

“Of course, when the club agreed the deal with Amazon, of course we were worried about it,” he said, with filming beginning after the season began.

“Then how you handle the situation to have the capacity to say, ‘OK, I am not in a good mood’, but sometimes the camera is going to be there.

“It is so complicated, it is another thing to worry about and of course that adds a lot.

“If we were busy now we are super busy. To plan everyday, everything is not an easy job.

“That is why, when I told you I feel that I am not any more a manager, I am a coach, now I am like a producer. Being coach, manager and producer.”

Pochettino might have much preferred cameras to be present in previous seasons rather than during his toughest spell in the Spurs hotseat.

But the Argentinian, who is confident his side can rediscover their best form, hopes for a happy ending.

“The most important is to live the reality, it’s not to try to generate something that is fake or not real,” he said.

“I hope there is a happy ending. But if not you are going to see another point of view, from different vision.”

Spurs held a team bonding session this week as they aim to overcome a difficult start which has seen divisions in their squad emerge.

They moved one step forward with a 5-0 demolition of Red Star Belgrade, though there may very well be a step back this weekend as they visit Liverpool on Sunday.

Pochettino insists that, whatever happens at Anfield, the revival will take time.

“It doesn’t mean that if we win at Liverpool everything is fixed, that now we are a different team or club,” he said.

“We need to keep going and keep consistent. The most important thing now is to find, happen what happens on Sunday, is to keep focus, keep improving.

“To perform in one season, across seven months, we need to perform at our best, one good performance and then a drop and then up, and down, it is so important to be consistent.”