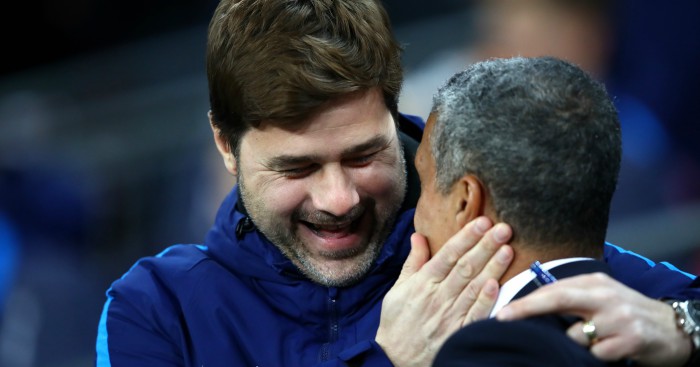 Tottenham’s Mauricio Pochettino is relishing the prospect of facing Manchester City after his team returned to the top four on the same evening their rivals set a new record with a 15th consecutive Premier League win.

Spurs were uninspired at Wembley but gradually ground Brighton down through Serge Aurier’s fortunate cross-come-shot and Son Hueng-min’s late header, to secure the 2-0 victory that took them up to fourth.

City’s 4-0 win at Swansea maintained their 11-point lead at the top and provided the latest demonstration of their exceptional quality, and even though they host Spurs on Saturday, Pochettino is unconcerned about their fine form.

That his team secured a third straight victory despite performing below their best and the fit-again Erik Lamela started his first competitive fixture since October 2016 provided the manager with further positives.

The three points also came after the 45-year-old started with Mousa Dembele and Dele Alli on the bench, though he bristled at questions surrounding whether the latter may have been unhappy at that decision.

“I’m so excited to play, because I love to play against teams and managers like (Pep) Guardiola, that are the best. I’m so motivated and so happy that we are going to play a team at their best.

“I am so happy and so pleased about the performances in the last few weeks: three victories in a row.

“Lamela brought to the team fantastic energy. It’s normal that he needs time to give his best, but it’s so important to have him fit again: he’s going to help us a lot.”

Asked about Alli, Pochettino then sarcastically responded: “How does another player at Manchester United, Arsenal, Liverpool react when they are on the bench? Tottenham is a specialist in creating problems.

“Alli was on the bench and then played 20 minutes. He’s an important player for us. How do other players react when they are on the bench? Sure they are unhappy. No one is happy. Everyone on the bench wanted to play.”