Home F365 Says Should Pochettino stick or go for the mystery box? 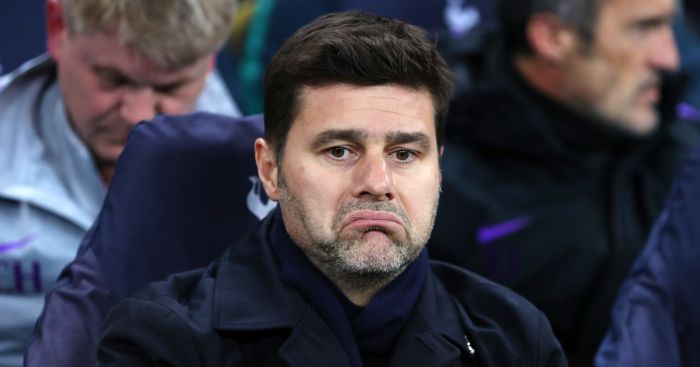 I’ve never been fully convinced about the idea of Mauricio Pochettino to Manchester United, despite the obvious merits to the idea.

It all just seems a bit too obvious, a bit too convenient, a bit too much of a media concoction: Pochettino’s Spurs are such a clear antithesis of everything Mourinho’s United were that it’s almost too easy.

Every one of Mourinho’s increasingly desperate excuses for United’s travails could be countered by pointing to north London. Didn’t get precisely the players you wanted, Jose? This fella didn’t get any at all, and doesn’t even have a stadium, and he’s third!

While Mourinho led an increasingly dispirited, fractious squad to ultimate ruin and misery, Spurs’ greatest strength remans their unity. Those who don’t toe the line are excised from the group – yet the cases of Toby Alderweireld, Danny Rose and Moussa Sissoko show that Poch’s firmness is backed by pragmatism rather than grudge-holding, and his alchemist’s ability to produce gold from the most unpromising raw materials is a thing of wonder.

Nevertheless, Pochettino remains a gamble for a club of United’s size and expectation. Quibbles about his lack of silverware grow ever dafter in assessing his time at Spurs, but that doesn’t make them irrelevant to his next potential employer – nor does his questionable record in the biggest one-off games. The sight of Spurs rescuing their Champions League campaign from admittedly self-inflicted wounds not once, not twice but three times in the last 10 minutes of their final three games must go some way to assuaging the latter concern, and United’s stated brief lessens the importance of the other.

Because United are already briefing and briefing hard. There can be little doubt that he is the man top of their summer wishlist unless Ole Gunnar Solskjaer goes full Di Matteo and wins the Champions League by accident.

A United source told the Times the next manager will need to ‘build a positive atmosphere’ and ‘create a united dressing room’. They could hardly be clearer if they’d specified that the new manager will need to be ‘a handsome Argentine fellow. For privacy’s sake, let’s call him Mauricio P. No, that’s too obvious. Let’s say M Pochettino’.

Plenty of potential candidates can beat Pochettino in a medals competition; none can match what he has achieved in bringing a disparate group of players both bought and inherited together with the clarity and positivity and unity of purpose achieved with flaky old Spurs.

It seems very likely, then, that Pochettino has a decision to make: stick with the successful yet unfinished project he’s devoted five years to, or take his first job at a genuinely elite club, albeit one that has fallen on hard times. It will not be as straightforward as either Spurs or United fans may think.

Spurs fans expecting unstinting loyalty from a manager with Pochettino’s ambition would do well to remember that he left Southampton for them, and has plenty of reason to feel a touch let down over the last 12 months. But, for the first time in the Premier League era, nor are United a clearly superior long-term bet than Spurs.

There are so many factors involved.

While it’s unthinkable that Spurs will go another year without signing anyone at all, it’s unlikely that a sudden influx of the sort of transfer cash he would be offered at United will materialise.

And yet at Spurs Pochettino now boasts the sort of Wengeresque autonomy and control that simply would not be repeated anywhere else – least of all at Old Trafford.

It seems certain that one of United’s first steps towards sorting a mess that was never entirely about the sulking Portuguese in the dugout will be to appoint a Director of Football. Spurs have been without one since 2016, when Pochettino’s first contract renegotiation saw his job title change from ‘Head Coach’ to ‘Manager’. That is no mere window dressing; he is now the direct line to Daniel Levy on transfer matters, even if that is only to say ‘where are the transfers?’

Spurs’ new stadium is another crucial consideration. Among the generic ‘happy here, but in football you never know’ spiel Pochettino has been forced to repeat many times already in his over-achieving time at Tottenham has been a genuine and heartfelt pride about being the man to lead the team out in their first game at the new stadium.

It goes back to Pochettino’s position of power and influence at the club that he has reportedly been involved in planning some elements of the new ground. Perhaps the ultimate power move for Levy now would be to postpone the stadium opening altogether until next season. You want to lead the team out, you’ve got to be here next season…

And then, of course, there is the ugly but unavoidable topic of coin. Pochettino is on a healthy £8.5m a year at Spurs, but United could smash that. Yet while that is inevitably a consideration, it doesn’t seem like the biggest one in this case.

This choice is not one between ‘lots of money’ and ‘even more money’, it’s this: in an era of increasingly transient coaches and managers, does Pochettino take the rare opportunity to potentially create a legacy by fashioning a whole club in his image; or does he take the opportunity to lead one already established among the world’s biggest? Stick with what you’ve got, or open the mystery box?

That decision is far from simple; he has six months to make it.