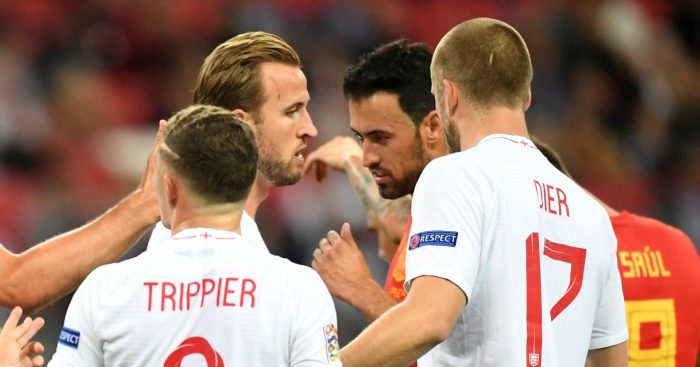 Mauricio Pochettino hailed the four Tottenham players who starred for England against Spain.

England secured a famous 3-2 UEFA Nations League victory over Spain on Monday, and you really ought to read our player ratings from Seville.

Give our famous England ladder a check after that, as Pochettino himself surely has.

The Tottenham manager was impressed with how his players dealt with the prospect of facing Spain away, with Eric Dier, Harry Winks, Harry Kane and Kieran Trippier all impressing.

“I think they were brilliant, we were talking today about how the attitude was amazing,” Pochettino told Sky Sports News.

“Against Spain if you do not play with more attitude than them, they have unbelievable players and it makes difficult your job.

“I think they were outstanding and it’s difficult to say Eric or Harry Winks or Harry Kane or Kieran Trippier, I think all the team was brilliant.

“The motivation to play against Spain will be so useful, you need to play with this attitude and then appear your quality and your talent.

“Attitude is important in football for the success and I think it is important for these types of players, I think they have a great potential in the future to win titles.”

Asked about Dier’s tackle in particular, and whether he was happy with his defensive midfielder’s contribution, Pochettino replied: “Yes of course, very proud.”