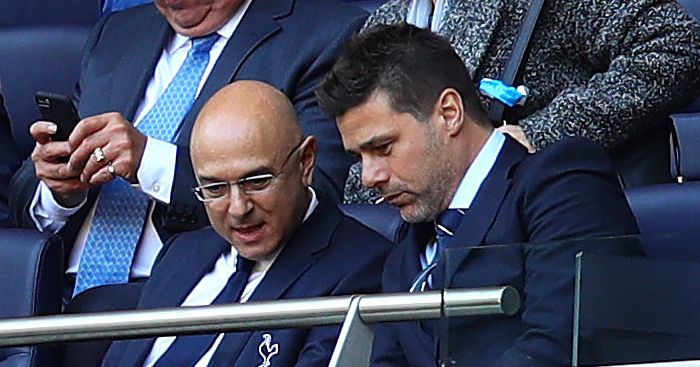 Mauricio Pochettino certainly knows how to change the tone of a pre-season. Tottenham have actually been moving along quite nicely, beating Juventus and Real Madrid either side of a strange little defeat to Manchester United. Harry Kane is scoring goals, Erik Lamela and Son Heung-min are playing well, and Tanguy Ndombele appears to be adapting nicely.

Particularly encouraging has been the promise of Troy Parrot and Japhet Tanganga, who may not quite be ready for the first team, but have suggested that might one day be their future.

But Pochettino’s mood only seems to be worsening. Spurs are being followed on their pre-season by a skeleton crew of beat journalists, nearly all of whom the Argentine has a long-term, cordial relationship with. Yet his press conferences have been characterised by curt answers, most often in response to benign questions which – under normal circumstances – he would just volley painlessly away.

There’s no need to be disingenuous: this is for show. With nine days left until the new Premier League year begins, Tottenham’s squad isn’t complete. Pochettino ended the season knowing exactly which players he needed jettisoned and precisely the areas of the pitch he wanted strengthened. Kieran Trippier has departed and Ndombele has arrived – that’s certainly what he wanted – but there’s work left to do.

Pochettino is more political than assumed. His English is still imprecise, meaning that his message often gets lost, but his intentions are generally clear. He isn’t another Jose Mourinho, obsessed with spinning the news cycle to his own advantage, but he clearly sees press conferences as an opportunity to tap his employer on the shoulder. As time goes on and the regard with which he’s viewed grows, it’s a gesture which has become slightly more menacing.

It’s also to play to the gallery, though. Pochettino is immeasurably popular with the Tottenham support and rightly so. He understands that the transfer window contorts otherwise reasonable people into rabid caricatures and recognises also that encouraging Spurs to ‘act like a big club’ will earn a chorus of approving cheers. Most likely, his ‘job description’ comments are, in this instance, his way of saying that he does not agree with how Daniel Levy has conducted business over the past few weeks.

More precisely, that refers to the achingly slow progress with Giovani Lo Celso. Real Betis probably need to make a sale to balance their books, Levy knows that, and the current stand-off appears to be a time-sapping repeat of a situation which has occurred summer after summer. Fulham are also yet to agree to Ryan Sessegnon’s sale. A long-term target, Sessegnon had a highly damaging first Premier League experience last season and it was probably more important that he had the benefit of a full pre-season with (what is still expected to be) his new club. It hasn’t happened and, unless something dramatic occurs, it won’t until the shadows begin to lengthen.

The fans’ instinct will be, almost unanimously, to back Pochettino. Why not, given that what he’s asking for makes so much sense? Yes, players do benefit from taking part in pre-season and – yes – if Tottenham hope to come close to replicating last season’s minor miracles, they will need to further strengthen their squad. From a technical and purely footballing perspective, he’s inarguably right.

And who’s really interested in the other side? Daniel Levy is a slightly awkward man who doesn’t engender much warmth. He has a slightly cultish appeal based on his eleventh hour dealings in the past, but most often the transfer window casts him as a villain – as an obstruction to progress and, in this instance, the decoupling device which could possibly separate this team from their manager.

There are also some aggravating circumstances. In April, Spurs released financial results which documented the largest profit in football history. Their long run in the Champions League last season is also likely to contribute to a hefty windfall when the current period’s results are made public in 2020. Combined with the new stadium and the revenues that will include, it paints a very healthy picture.

Elsewhere in the Premier League, rivals are strengthening at pace. Arsenal are about to break their transfer record to sign Nicolas Pepe despite facing another season in the Europa League, and Manchester United seem likely to snag Paulo Dybala in spite of an increasingly decrepit Old Trafford, a managerial nobody, and a chief executive who, according to common perception, wouldn’t know a footballer if Leo Messi kicked him in the balls.

So it’s frustrating. Tottenham are supposed to be the smart club, the progressive club, the club that makes these other sides look inefficient by comparison. And yet here they are, dallying again and playing fast and loose with their progress. At this moment in time, it’s tempting to look at their squad, to see the shortages at full-back, the wavering commitment of Christian Eriksen and the lack of depth and reason, despite Ndombele’s obvious quality, that any gains they’ve made have been marginal.

But isn’t that an argument which has been made every year since Pochettino arrived? It’s almost annual tradition. Like overreacting to pre-season, Arsenal supporters over-celebrating an academy prospect or first attempts at a Fantasy Football team: when the Community Shield kicks off, Tottenham World is a mess of fatalism and paranoia.

As if to make that point, as of Wednesday morning a Levy Out hashtag is currently trending on social media. It’s representative of the psychoses which afflict all fanbases at this time of year, but it’s also indicative of just how effectively Pochettino is able to control public opinion.

It also obscures this situation’s strange mechanics. There was a point in time when Pochettino used to wear his detachment from the club’s transfer dealings as a badge of honour. The recruiting dynamic has changed several times since – vale Franco Baldini, vale Paul Mitchell – but he has always seemed to enjoy the reputation afforded to him as a result. In this world of oil wealth and oligarchs, he thrives on the perception that he’s armed with just a few training cones and a whistle.

In fact, he’s used that to his advantage many times, talking repeatedly of working in a different way and needing to sugar the gas tank of clubs who enjoy so many artificial advantages. The underdog is a part he was born to play and, arguably, that mentality has been one of the roots of his success.

This shouldn’t read as criticism. Nobody should have anything but total admiration for the work Pochettino has done at Spurs. He has turned a genetically flaccid team into a side that nobody in Europe wants to play, home or away. What an achievement that is; what an endorsement of his abilities.

But his expectations still seem to have taken a quantum leap within a very short space of time. A year ago, he was the high priest of continuity, preaching the virtues of his existing players and resisting the urge to add depth for depth’s sake. He even seemed frustrated at times with the transfer lust he’s now working hard to fan, with his mood also darkened by Tottenham’s failure to instantaneously evolve into Manchester City, the kind of club who spend money like water and do so without consequence.

The truth, as ever, probably lies somewhere between Levy and Pochettino, in the recognition that the manager does deserve backing, but that adding to this squad while having to partially fund those acquisitions with sales is a tricky balance. Levy can be a pain, most accept that, but there is a difference between taking umbrage with his pernickety negotiating tactics and being annoyed when he refuses to meet over-the-odds asking prices for the sake of transfer acceleration.

It would be beneficial in the sporting sense were he to do so, that’s certainly true, but at no point during the ENIC era have Tottenham been run in that way. The club Pochettino joined didn’t have that luxury and now, even with the new stadium, they still don’t. They’re wealthier, financially and infrastructurally superior. They’re also far better, and that’s his shining achievement. But they are still a sugar-in-the-gas-tank club and that applies on and off the pitch.

Pochettino knows that. Until very recently he made great capital from reminding everyone how different his working conditions were. Maybe this outbreak of wilful ignorance is just a well-disguised ploy, but it’s a strange and contradictory stance to take in public. He’s a wonderful head coach. He’s also a charismatic man of tremendous gravity. But while Tottenham should naturally do everything they can to keep him content, that cannot extend to stretching themselves beyond their elastic limit.