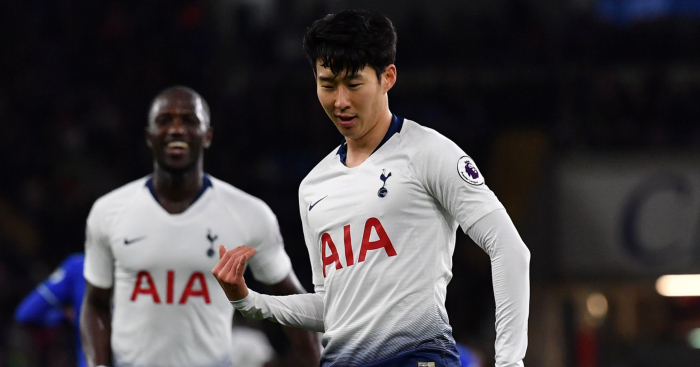 Mauricio Pochettino did not blame the officials, nor did he insist his side deserved to win. In fact, it was the complete opposite: he admitted that defeat to Wolves last week was an entirely self-inflicted wound.

It was a point he stressed more than once, that his players were beaten due to a lack of “energy” and “freshness” – not of ‘bottle’ – on Saturday. So for the Argentinean to make just one change to his starting line-up against Cardiff three days later seemed counter-productive and contradictory.

The 46-year-old has, by now, done more than enough to earn faith and trust when making such huge decisions. Tottenham cruised into a three-goal lead in south Wales, never shifting out of second gear, and allowing wholesale changes to be made for Friday’s FA Cup third-round visit to Tranmere.

But one of the boldest and best calls Pochettino has ever made as Tottenham manager continues to pay dividends. It seems peculiar that he ever had a decision to make over the future of Heung-min Son, never mind that it was just two-and-a-half years ago.

“He came to see me and said he needed my help, and I said: OK, always my door is open,” he said in September 2016. “He is a quiet person, a nice person. After the Olympic Games his idea was to leave to go to Germany. But one thing is what the player wants, and the other thing is the club’s decision. In his mind, he would like to move but in the end he accepted the decision to stay and fight for his position.”

A month earlier, Son had admitted “it is not a good sign that transfer rumours are coming out”. The South Korean had just completed an underwhelming and injury-hit first season at White Hart Lane, and was already contemplating a return to more familiar shores in Germany.

It would have been easy for Pochettino to cede to an unhappy player’s request. Son had made as many appearances as Nacer Chadli and scored as many Premier League goals as Toby Alderweireld in 2015/16; he hardly seemed good enough to risk unsettling a harmonious dressing room. Many managers would have sold him and reinvested the proceeds.

That the 26-year-old is keeping natural company with that calibre of player is testament not only to his brilliance, but to Pochettino’s belief. The manager’s trust and persistence provided Son with the platform he needed.

With his well-taken goal against Cardiff, controlling Kane’s quick pass and taking an extra touch to create space between himself and Sean Morrison before a clever finish, Son continued his fine run of form. He has now scored 11 goals and assisted five in his last 16 appearances.

It was also his 58th goal under Pochettino – only Kane (153) has more. He has solved two problems that have long haunted Tottenham: he can both replace Kane when needed, and supplement, support him and share the goalscoring burden otherwise.

Pochettino has some drastic decisions to make in the coming weeks. The Premier League’s form player will miss up to five matches as he joins up with the South Korea squad for the Asian Games later this month. How Tottenham must rue having to briefly share custody of their brilliant Son.