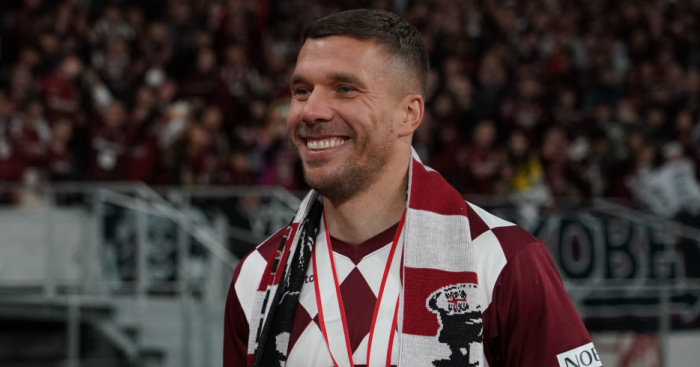 Ex-Arsenal forward Lukas Podolski called out the Gunners for not giving him what he deserved during his two-and-a-half-year spell in north London.

The German international arrived in the Premier League in 2012 on the back of being one of his country’s standout performers over the better part of the previous decade.

His time with Arsenal yielded an FA Cup in 2014, but after a stellar first season in which 16 goals were plundered in all competitions, Podolski fell down the pecking order.

Just 40 more appearances were made in the 18 months following his debut season before he was shipped out to Serie A heavyweights Inter Milan on loan in the 2015 January window.

Now, speaking to FourFourTwo (via SportsMole), Podolski bemoaned his relative lack of minutes during his tenure despite boasting a superb goals involvement ratio.

“I didn’t get enough game time; I felt that I performed well and didn’t get the minutes I deserved,” said Podolski.

“On the other hand, if you look at my stats, I played in about 80 matches and was directly involved in a lot of goals by scoring or assisting. My relationship with the fans and players was positive. We won the FA Cup in 2014, which was the club’s first trophy for quite a few years. And I liked living in London, in Hampstead. My family enjoyed it, too.

“[Wenger] was a great manager and I really like him as a person, too. He was like a grandpa: a very intelligent man, who was nice to talk to. He could speak lots of languages and never yelled. He was Arsenal: he created everything.

“Arsene created a style of playing. He was the man who oversaw the club’s move to the Emirates Stadium from Highbury, and won so many trophies during his 22 years there.

“I’d be fascinated to see how he would have done in charge of another team.”

Podolski was eventually sold to Turkish side Galatasaray upoc completion of his loan spell in Italy, and currently plies his trade for Antalyaspor.