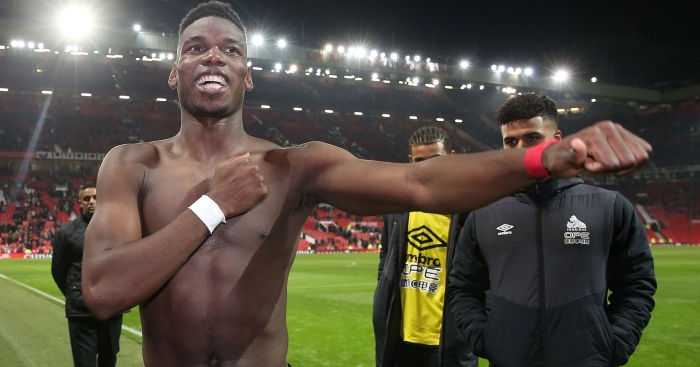 Paul Pogba admits Manchester United are ‘lucky’ they won’t have to face Neymar when they come up against PSG in the Champions League.

The Parisians are in Manchester for the first leg of their last 16 clash with the Red Devils but they have had to leave Neymar and Edinson Cavani behind because of injuries.

Pogba is full of anticipation for the meeting – especially with Neymar absent.

“There are a lot of French players, and they have top players who have been winning the league for I don’t know how many years. They’re looking to win the Champions League – that’s their goal.

“The goalkeepers, Alphonse Areola, Gigi [Buffon] – I played with both of them, and Kylian and [Presnel] Kimpembe. So I’m looking forward to playing against them, but the first thing is to win against them! That’s what I want.

“He understands the game and that is the difference between him and the other young, top talented players. He’s just a machine.

“You think about Thierry Henry, Ronaldo – he’s this kind of player, who can score goals, is very fast, can dribble, can make assists. He’s a player that it’s hard to block.

“I would say we are lucky that Neymar is not there – it’s unlucky for him, but lucky for us because he’s a player that can change the game by himself as well.

“Those kinds of players, you don’t really know where or how to block them, because they can create so much space, they can dribble [past] two players, they can score goals.

“They are all dangerous, so you don’t think about only one player, because it’s always a team. But obviously their attack is the key. So hopefully we’re gonna block them.”