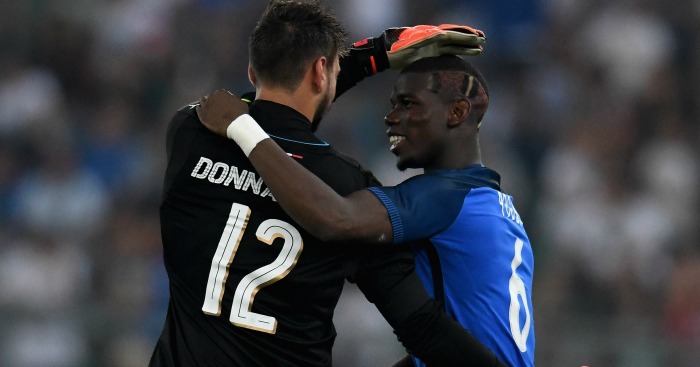 Paul Pogba has defended the actions of Gianluigi Donnarumma, insisting the AC Milan teenager deserves to be treated with nothing but respect.

The 18-year-old Milan goalkeeper looks likely to leave the San Siro this summer after his agent Mino Raiola revealed the €90million-rated star had rejected a new deal with the club.

The likes of Manchester United and Real Madrid have both been linked with Donnarumma, who saw fake money thrown at him during Italy’s European Under-21 Championship game against Denmark on Sunday evening.

But in the wake of that incident, Manchester United midfielder Pogba came to the youngster’s defence.

Donnarumma soon best in the ? deserves only respect for all he's done until now ?? #forzaGigi

Both Donnarumma and Pogba share the same agent in Raiola, so the defence is likely nothing to be surprised about.

United have been linked with the goalkeeper – the man many feel is the natural heir to Gianluigi Buffon – as a possible replacement for Real Madrid target David de Gea.

Milan, meanwhile, have met with the agents of two potential replacements for Donnarumma, according to reports in the Italian media.

Mattia Perin, the keeper for Genoa, and Norberto Neto, the Juventus back up have both met with Milan’s directors Marco Fassone and Massimiliano Mirabelli to discuss potential deals, reports Calciomercato.