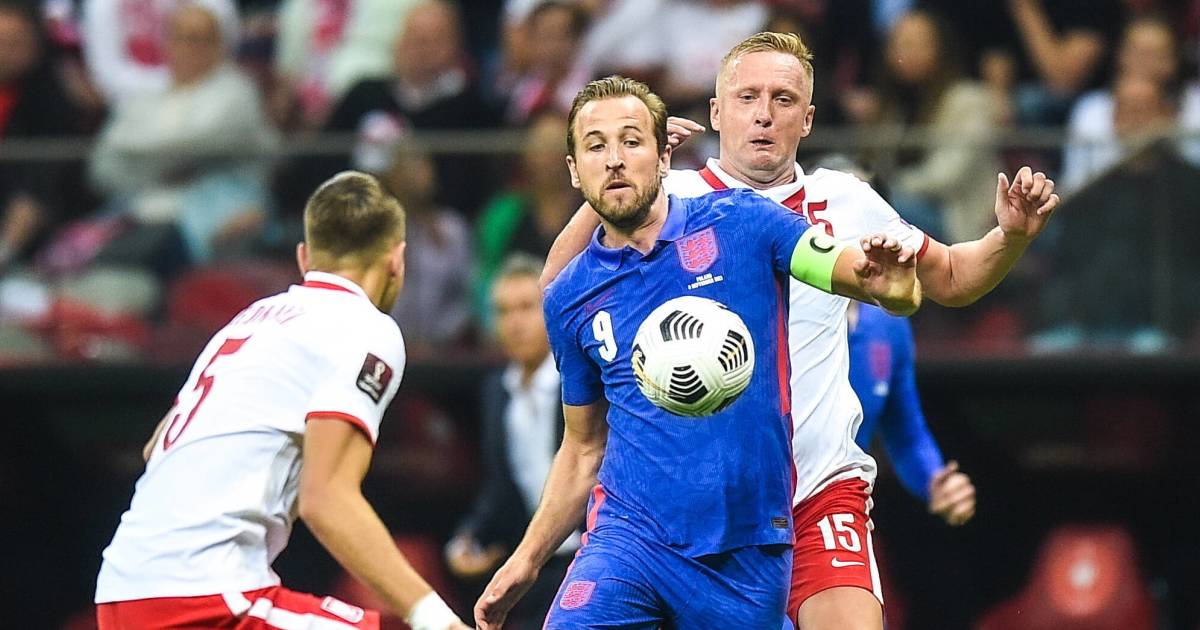 The perfect record is gone, but England remain unbeaten and Harry Kane’s absurd scoring streak in qualifiers also goes on and on and on.

The lateness of the Poland equaliser will niggle Gareth Southgate, but they remain firmly on track for the World Cup regardless.

Here’s how they all got on…

JORDAN PICKFORD
Denied yet another clean sheet for the collection right at the last but not much he could do about that. Couple of comfortable saves and general reassuring command of his domain until having a Minor Pickford with a charged-down clearance that had him scrambling back to rescue things on his goalline.

KYLE WALKER
Given twisted blood by Jakub Muder in the build-up to Poland’s dramatic late equaliser. Until then it was his attacking play that was the more obvious cause for concern although he did drop a fire assist for Harry Kane’s opener.

LUKE SHAW
Attempted 12 crosses to Walker’s two, which tells you a fair bit about the attacking endeavours of the two full-backs. Also outjumped for the equaliser.

JOHN STONES
Picked up a knock that looked set to curtail his evening but soldiered on and showed few ill effects in the second half. Just an absurdly reliable and efficient centre-back on England duty these days and absolutely locked in alongside Maguire in the first-choice XI no matter what formation or tactics Gareth deploys.

HARRY MAGUIRE
Involved in half-time handbags with Kamil Glik that earned him a booking. Generally solid in a game when Robert Lewandowski generally opted not to engage with England’s centre-backs, preferring to do the bulk of his work dropping deep or drifting wide as he did to create the equaliser.

DECLAN RICE
Couple of bits of calm yet necessary firefighting during Poland’s fast start and generally assured throughout. “Rice and Phillips” is already an identifiable and significant element of this England team, and they combined for six tackles, two interceptions and blocked shot tonight to go with 143 passes.

KALVIN PHILLIPS
Harshly booked early on but, as in the summer, showed the composure and maturity to walk the tightrope. Should probably have done better when Lewandowski ghosted in behind him before miscuing into Pickford’s hands, but plenty of players with plenty more experience than Phillips have been shown up by Lewandowski. Took the safe option a couple of times in the first half, most notably when failing to play Kane clean through when it appeared the most obvious thing in the world. But the screening job he and Rice do really has been such a huge part of what makes this England side tick.

JACK GREALISH
Frustrated throughout much of the first half with Poland’s physicality making life difficult and the referee erring on the side of leniency. Burst to life towards the end of the half with a slaloming run across the penalty area with a smart pass to Shaw at the end of it. Spent second half making lots of pretty patterns with Mount and generally making life difficult for the Polish defence. Despite the referee’s best attempts to let the game flow was still fouled six times. Standard.

MASON MOUNT
Lots of lovely interplay with Grealish but, if we’re being ruinously harsh, not quite enough end product to go with it. But a 94% pass success rate given the intricate and speedy nature of the passes he was playing is a daftness, really.

RAHEEM STERLING
Great work when isolated on the right to create the space and then find the cross to set up a chance that an equally isolated Harry Kane should probably have done more with. Notably guilty of overplaying when in promising positions after the break. Not his best night, all in all.

HARRY KANE
Classic Playmaker Kane pass set Grealish away to win England’s first corner and then another minutes later to release Walker and confirm again that those who bemoan Kane’s refusal to just goalhang endlessly will always be wrong. That said, we don’t really want to see him at right-back quite so often as we did in the first half here. Still visibly lacking full match sharpness after… everything, but then went and thumped in a swerving 30-yard thunderbastard to make it three goals from three games in this break. Twelve more needed to match Wayne Rooney; if it wasn’t already, it’s now a question of when and how far he goes past that 53-goal tally rather than if. Whatever you want to say about his “big game” record, that’s now 15 Euro and World Cup qualifiers since Kane last failed to score and that’s an absolute nonsense.

There were no substitutes. Less work for us – for which we are always grateful – but… not great for a manager when you concede a 91st-minute equaliser, you’d have to say.