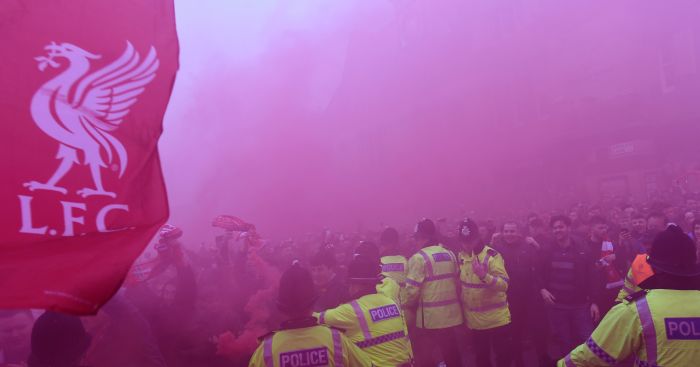 Merseyside Police are conducting enquiries to identify those responsible for the attack on the Manchester City team bus at Anfield on Wednesday night.

Missiles were thrown at the vehicle as it arrived at the stadium ahead of the Champions League quarter-final first leg against Liverpool.

Match Commander Superintendent Paul White said: “We are aware that damage was caused to the Manchester City team bus as it approached Anfield stadium this evening ahead of the Liverpool v Manchester City match.

“Thankfully no one on the bus was injured, but injuries were caused to two of our officers when projectiles were thrown towards the bus. The officers and stewards are there to protect the public and keep them safe.

“This behaviour by a number of people who threw bottles, cans and pyrotechnics towards the bus is completely unacceptable and we will conduct enquiries to identify who was responsible and bring them to justice.

“We worked very closely with both clubs to ensure the safety of the public and the teams themselves, and it is disappointing to see that a number of people behaved in this appalling way.”

Liverpool released a statement before the match apologising to City over the incident. The club said the priority was to “establish the facts and offer Manchester City whatever support is necessary”.

City boss Pep Guardiola said after the game: “I didn’t expect that. I am new here.

“Normally when the police know that is going to happen, they try to avoid it happening.

“The bus is destroyed. I didn’t expect that a club as prestigious as Liverpool would do these kind of things.

“Of course, it is not Liverpool, it is the people. It was not only one, only two, only three. Hopefully it doesn’t happen again.”