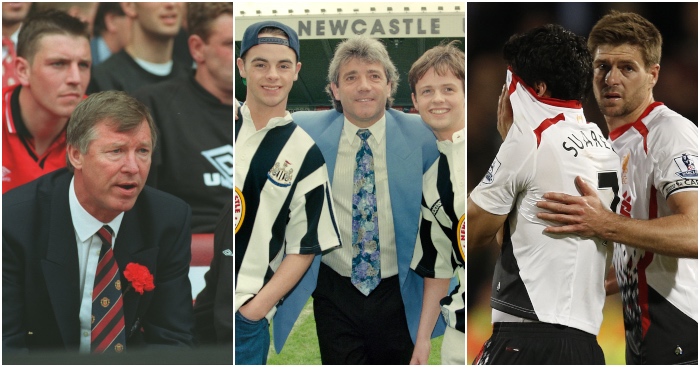 Chelsea – 2003-04
Jose Mourinho won’t be the one to tell you, but the Special One took over what was already a pretty special team in 2004 before he chucked another £100million at it.

The season prior to Mourinho’s arrival, Roman Abramovich had a fun old time watching his new plaything entertain everyone at home and abroad. Claudio Ranieri had been given an even greater sum during the new owner’s first summer as owner and the Italian manager assembled a squad worthy of challenging for the Premier League title.

Unfortunately for Ranieri, Arsenal were also pretty handy that season. Both the Blues and the Gunners outperformed the previous season’s champions, Manchester United, but Abramovich had to watch while Arsene Wenger’s side remained unbeaten and out of reach.

Arsenal also bettered Chelsea in the FA Cup at the fifth-round stage but the Blues took their revenge in the Champions League, knocking out Arsene Wenger’s side out in the quarter-finals to join Monaco, Porto and Deportivo La Coruna in a last four which offered Ranieri little to fear.

On this day in 2004, Wayne Bridge sent Chelsea into the Champions League semi-finals with this strike v Arsenal… https://t.co/NOfD2yyHZM

But Chelsea f*cked it. They lost the first leg at Monaco 3-1 and though they hauled themselves level on aggregate within 44 minutes of the return at Stamford Bridge, they missed a string of other chances and allowed Monaco plenty of their own, two of which they took to book a place in the final against Porto. Mourinho succeeded where Ranieri failed, with the former soon replacing the latter.

Newcastle – 1995-96
In Newcastle’s third season back in the top flight, Kevin Keegan went for it, in every sense. After finishing sixth the previous season, Sir John Hall sanctioned a spending spree which brought Les Ferdinand, David Ginola, Warren Barton and Shaka Hislop to the North East during the summer. Then with a 12-point lead in mid-January, the Toon strengthened again by putting down another £11million for Faustino Asprilla and David Batty.

But it all began to unravel within a month. A 2-0 defeat at West Ham triggered a run eight matches which reaped only seven points. One of those defeats came to a United side whose relentlessness defied their youth and Alex Ferguson’s squad followed that narrow victory with four more 1-0 triumphs while winning seven of their last nine.

After battering United but ultimately losing, Keegan’s side won only half of their remaining 10 games. The previous swagger was replaced with an apprehension which Ferguson mercilessly honed in on.

It’s a pity that the most abiding memory from that season for most outside Tyneside is Keegan losing the plot on live television, because his team were f*cking brilliant to watch and deserved more credit than that. Consolation was not to be found in the cups. Chelsea knocked Newcastle out of the FA Cup on penalties at the third-round stage after coming back from 2-0 down while Ian Wright’s brace and Ginola’s red card prompted a miserable League Cup exit at Arsenal.

Manchester United – 1994-95
Sandwiched between domestic Doubles in the mid-1990s for United was a season which took Ferguson tantalisingly close to another. But it probably worked out for the best in the long run.

The champions spent the vast majority of the season chasing Blackburn at the summit, with Ferguson’s side leading from the front on only five matchdays, the last of which came at the start of March. By that time, United had been stripped of their best player for over a month following Eric Cantona’s suspension, but they didn’t let up. The Red Devils lost only two of their 16 games without Cantona and when Blackburn won just two of their last six, an opportunity presented itself on the final day.

Actually, a barrel load of them came United’s way at West Ham but Ludek Miklosko chose that game to channel the spirit of Lev Yashin. United couldn’t find a winner at Upton Park, presenting the title to Rovers.

Ferguson failed to raise his side again for the FA Cup final the following week as Everton kicked United when they were down, with Paul Rideout dishing out the knockout blow. By that time, misery in the Champions League and an early League Cup exit were a distant memory.

Had United not failed in the final week of the season, perhaps Ferguson would not have been quite so motivated to swing the axe through his squad. Paul Ince, Andrei Kanchelskis and Mark Hughes were all shipped out to make way for the Class of ’92 graduates who made a pretty decent fist of things.

Liverpool – 2013-14
Even if the Reds reach 97 points and still don’t win the title this term, Jurgen Klopp will at least be able to console himself with Liverpool’s record points haul and the satisfaction of knowing his side pushed a brilliant Manchester City all the way. Brendan Rodgers had nothing to cling to.

The stated aim for Rodgers at the start of the season was to take the Reds back to the Champions League after a seventh-placed finish during his first year in charge. Liverpool bobbed around the top four for the first half of the campaign before they embarked upon an exhilarating run after the turn of the year, winning 14 out of 16 matches – a run that included a 10-game streak of victories.

Luis Suarez, Steven Gerrard, Daniel Sturridge and Raheem Sterling treated Anfield to some of the finest football it had hosted in years, with Suarez winning the Golden Boot, Sturridge breaking the 20-goal barrier and Gerrard providing the most assists in the Premier League. The Reds netted 101 goals, but in the end, it was only good enough to make them the first runners-up ever to hit a century.

A fortnight after Gerrard was heard telling his team-mates “this does not slip” following a thrilling win over City, the skipper did precisely that. Jose Mourinho parked the Chelsea bus and when he eventually got on it to leave Anfield, he did so with a 2-0 victory that handed the title initiative to City. Liverpool looked to have got it out of their system eight days later when they ran into a 3-0 lead at Crystal Palace in the penultimate game of the season but they collapsed spectacularly, allowing the hosts to score three in the final 11 minutes.

City seized their opportunity by winning their final two matches, while exits to Arsenal and Manchester United in the FA Cup and League Cup respectively left Rodgers’ Reds with nothing to show from a thrilling season.

Arsenal – 2005-06
The first of eight potless seasons for Arsenal took them closer to winning the biggest prize than they had ever been before, or have been since.

During their final season at Highbury, the Gunners’ Premier League campaign was something of a damp squib. But their first of six fourth-placed finishes in nine years offered a taste of what was to come. Even their lowest finish in a decade was greeted with glee when it was secured on the final day of the season as they said goodbye to Highbury while Tottenham players said farewell to the contents of their stomachs across London at West Ham.

Arsenal saved their best work for Europe. Wenger’s side came within 13 minutes of their first ever European Cup, but their 10 men eventually wilted in the face of Barcelona pressure. Samuel Eto’o cancelled out Sol Campbell’s first-half opener before Juliano Belletti blasted the winner through substitute goalkeeper Manuel Almunia.

Their journey to Paris was even more thrilling than the final. Real Madrid, Juventus and Villarreal were all eliminated in the knockout stages, with the 1-0 victory at the Bernabeu particularly memorable. Thierry Henry’s brilliant solo goal saw Arsenal become the first English side to win at the Bernabeu while inflicting upon the hosts their first Champions League defeat in 18 matches.

Amid all the European excitement, Wenger saw an under-strength team go out of the FA Cup at Bolton, while Wigan denied the Gunners a trip to Cardiff for the League Cup final when they secured a dramatic injury-time victory on away goals.

Bayer Leverkusen – 2001-02
Klaus Toppmoller’s men became the second side ever to finish as runners-up in the European Cup, domestic league and domestic cup, following from Barcelona’s season as perennial bridesmaids in 1986.

Leverkusen were vying for the Bundesliga title with Borussia Dortmund and from late February, they led from the front. But a 1-0 defeat at Nuremberg in their penultimate league fixture open the door for Dortmund, and Matthias Sammer’s side gladly accepted the invitation.

Leverkusen clawed their way to the final from the third qualifying round, via a first group stage that saw them share a pool with Barca, Lyon and Fenerbahce before Arsenal and Juventus were disposed of in the second group. Liverpool were then conquered in the quarter-finals before United were vanquished to take the Germans to Glasgow.

There they were desperately unfortunate to find themselves on the wrong end of an even final against Real Madrid and Zinedine Zidane’s left foot. Leverkusen travelled to Scotland already on a downer after losing the DFB Pokal final to Schalke the previous weekend and defeat at Hampden Park left Toppmoller devastated.

“The disappointment is huge – you don’t always get the rewards you deserve in football, and no-one knows that better than us after what we have been through,” he said. “We must seek consolation. Doing what we have done means we have had a very good season – but what has happened to us is difficult and makes us feel bitter.”

Maybe he could give Jurgen Klopp call…