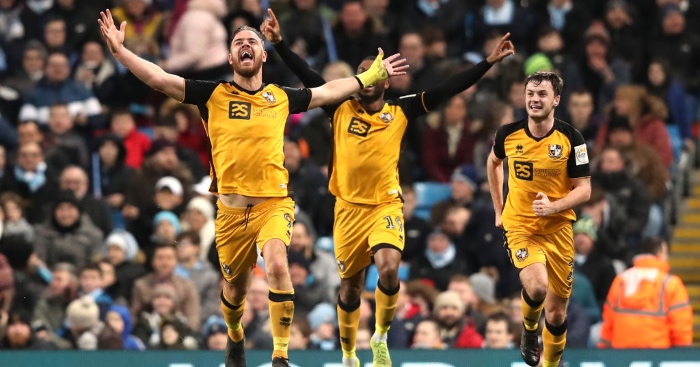 Tom Pope felt he “shut a few people up” with his eye-catching cameo in Port Vale’s FA Cup defeat at Manchester City.

Saturday’s third-round tie at the Etihad Stadium ran to form as holders City eased past their League Two visitors 4-1.

But the main talking point from the game was Pope’s goal for Vale as the 34-year-old backed up his pre-match bravado in a personal battle with City’s John Stones.

Last summer Pope mocked Stones in a tweet, claiming he would score 40 goals a season if he faced the England defender every week.

All eyes were on their duel and, although Stones largely dealt with him well and had the last laugh as City prevailed, Pope certainly had his moment.

Pope cancelled out Oleksandr Zinchenko’s opener with a fine header and later intercepted a Stones pass to create another chance.

“He’s a world-class centre-half. I was just saying he wasn’t very physical and that’s it. If people think I’m wrong, well, I don’t care.

“I spoke to (Benjamin) Mendy and he said all their players had battered him for weeks about it and they got him that wound up about it, and then obviously I’ve scored and he’s probably devastated.

“But I was just hoping I got a half chance to try to put one away. The last thing you want to do is get beaten 7-0 after everything that’s gone on Twitter, not score and everyone laugh.

“It was nice to shut a few people up to back up what I said but it’s water off a duck’s back. I wasn’t too bothered about it either way.”

City invited the Vale players into the home dressing room after the game and Pope admits his meeting with Stones did not go well.

“They all dragged me in, the Man City players, but John wouldn’t speak to me,” said Pope, whose goal was also his 109th for the club, a post-war record. “It was a little bit awkward. I shook his hand but he wasn’t too happy.”

Pope certainly felt he had no reason to back down, later tweeting: “I’d just like to say I was completely wrong and bang out of order to say I’d score 40 a season….. it’s more like 50.”

Despite Pope’s 34th-minute leveller, City never really looked like relinquishing their grip on the cup.

Sergio Aguero restored the lead before the break and Taylor Harwood-Bellis got the final touch on a Stones shot to claim City’s third. Phil Foden wrapped up the scoring but Vale still left with credit.

Pope said: “Beforehand we were all joking we would take five and we ended up conceding four, so that’s an added bonus for us.

“Pep (Guardiola) put a ridiculous side out and as soon as you seen the team sheet, that’s when you start to shake. But the lads dug in and worked their socks off.

“Defensively we stuck to the gameplan, we were decent, I thought. We put bodies on the line. We were strong.”

Harwood-Bellis’ goal was his first in senior football and he was happy to claim it.

“I’ll take the goal,” said the 17-year-old. “There was a bit of luck with it coming off John’s shot but it was quite obvious it came off me.

“They did OK to start off with but we have enough quality in our team to react and bounce back and score a couple of goals like we did.”