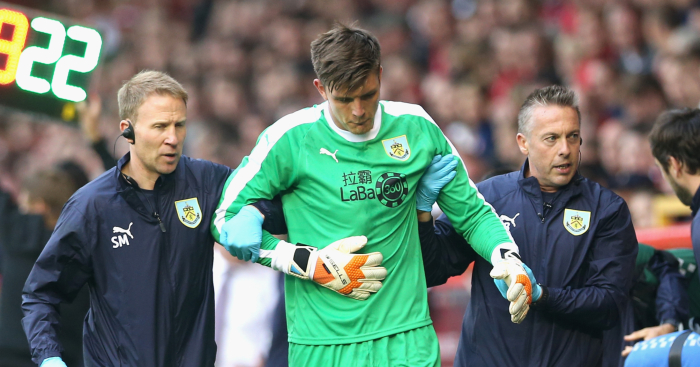 Burnley’s Nick Pope has undergone an operation on a dislocated shoulder to leave the club facing a goalkeeping headache.

The news was announced by Sean Dyche at a press conference ahead of the Europa League second qualifying round second leg against Aberdeen.

Tom Heaton is also a doubt and Dyche revealed the club have applied for UEFA dispensation to bring in a goalkeeper for Thursday’s tie.

Pope seized his chance in Burnley’s line-up last season after Heaton suffered a dislocated shoulder of his own, meaning a long-term absence.

The roles could be reversed this time, with Dyche unable to offer a timescale on Pope’s return.

“He’s had the op,” the manager said. “So far, pleasing news in the sense the specialist was happy.”

Pope made the most of last season’s opportunity, making more saves than all but five Premier League keepers to earn a place in England’s World Cup squad.

Midfielders Robbie Brady and Steven Defour are also dealing with minor injuries as Burnley prepare for the return leg after last week’s 1-1 draw.

A Gary Mackay-Steven penalty gave Aberdeen a first-half lead at Pittodrie but Sam Vokes hit back in the 80th minute to leave Burnley on level terms and with an away goal under their belt.