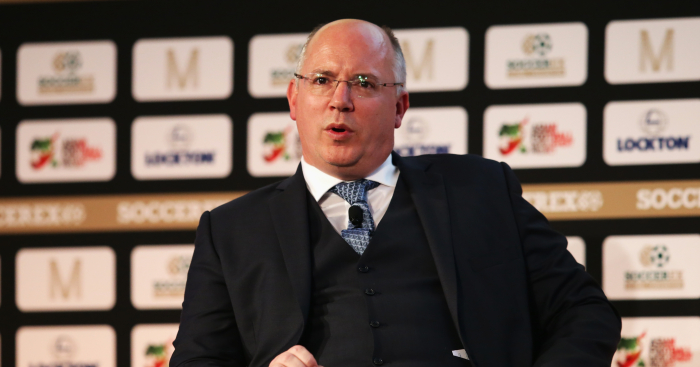 Shaun Harvey will step down as chief executive of the English Football League at the end of the season, the organisation has confirmed.

The 48-year-old has run the league since October 2013, having previously been a managing director at Bradford and chief executive at Leeds.

Harvey is understood to be interested in the Premier League job but no details have been released about what he intends to do next, having spent the last few years force-feeding fans a sh*t sandwich.

In a statement, he said: “Having joined the EFL as CEO in October 2013, I am proud of what we have achieved since then, in what have not always been easy circumstances.

“Consistently during my time, I have always looked to push boundaries to make the maximum positive impact for clubs, whether this be from a financial perspective or by generating value in another way. I have always held the view that the strength of the EFL is its clubs and no club, or indeed individual, is bigger or more important than the collective or the EFL itself.

“After discussions with the board, we decided that the time is right for the EFL to now move in a different direction having concluded a number of commercial contracts that leave the league in a stable position.

“I am happy to remain as CEO until after the play-offs, in order to conclude a number of outstanding matters that we are currently dealing with, after which I will move on to pastures new and hopefully make a positive difference elsewhere.”

Harvey has come under increasing pressure from several Championship clubs unhappy about the domestic broadcasting deal he struck with Sky last year.

Almost half of the clubs in the Championship believe £590million over five years is not enough money for the number of games Sky has been given, the deal is too long at a time when the market for sports rights is changing so quickly and not enough protection has been given to the clubs’ own streaming businesses.

There has also been criticism of Harvey’s approach to the job, with many of the bigger clubs saying he does not consult them on broadcasting or sponsorship deals, while there have also been complaints from clubs at the other end of the EFL’s spectrum about the growing financial gap.

Furthermore, Harvey has also had to deal with protests from fans about the EFL’s inability to tackle controversial owners.

That said, most of these issues are not exclusive to the EFL or even football, and Harvey can point to several areas where he and the league have taken the lead, most notably in pushing for more opportunities for black, Asian and minority ethnic (BAME) coaches and safe-standing.

The number of clubs in financial crisis has also fallen on his watch, as cost controls have forced clubs to live more within their means, and revenues have improved slightly over his tenure.

The EFL’s interim chair Debbie Jevans said: “The EFL would like to thank Shaun for all he has delivered since joining as CEO in 2013. The EFL is in a strong position with a growing fan base throughout the world and Shaun deserves a lot of credit for this.

“Shaun and the board have agreed that the time is now right for a change of leadership and a new direction. We are pleased that Shaun has agreed to stay on until the end of the season.”