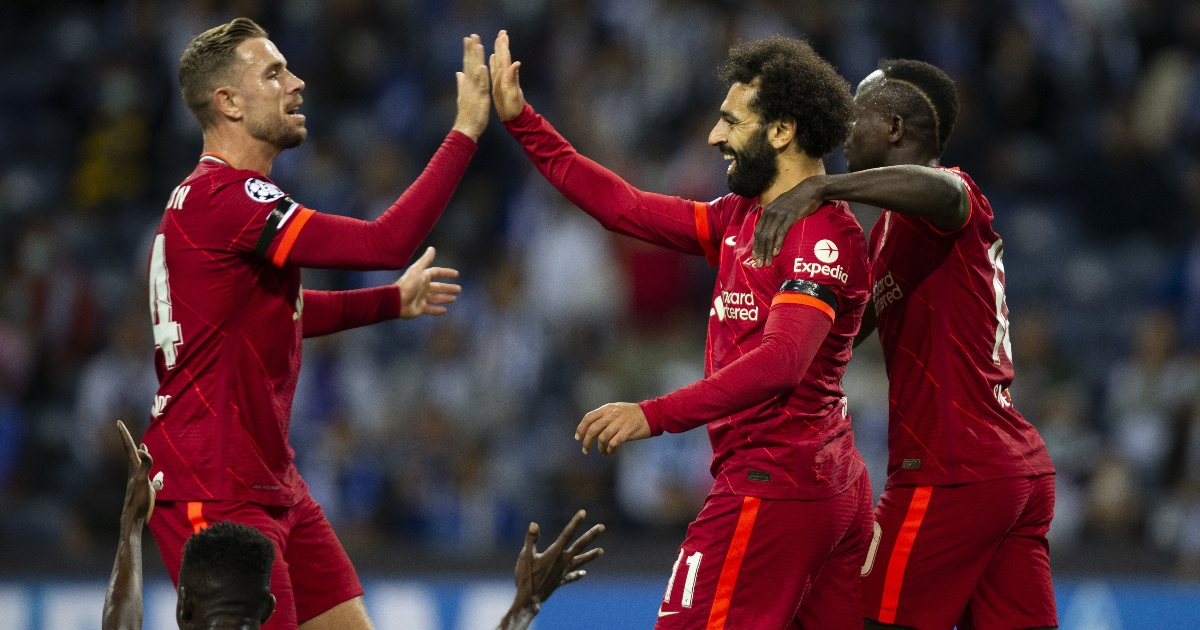 Liverpool demolished Porto 5-1 away from home in their Champions League encounter on Tuesday evening.

Jurgen Klopp’s side have scored 14 times in their last three visits and his deadly duo of Mohamed Salah and Sadio Mane have been responsible for nine of them.

Salah scored twice and Mane once before Roberto Firmino, a late substitute, scored twice inside five minutes as the man he replaced – Diogo Jota – was the one to miss out against his former club.

Porto’s last defeat had been in April’s quarter-final to eventual champions Chelsea but there was no halting the Reds’ impressive record in this stadium.

The result at least eased the major headache Klopp had given before he left Merseyside when Trent Alexander-Arnold did not even get on the plane to Portugal.

Assessment of a groin injury has revealed the problem is more serious than initially thought when he left training early and he is doubtful for Sunday’s visit of Manchester City.

For the second time in 10 days utility man James Milner stepped in at the last minute when the England defender felt ill on the morning of the match against Crystal Palace, although the 35-year-old had a little more notice this time around.

He was up against Luis Diaz but this season’s Primeira Division’s leading scorer was restricted to just one weak shot which Alisson Becker comfortably saved as the veteran dominated, even providing an Alexander-Arnold-style assist for Mane.

Porto had their own last-minute injury problems when the 38-year-old Pepe, a doubt on the eve of the game, pulled out in the warm-up and midfielder Otavio – one of the few survivors from the clubs’ previous meeting – lasted just 14 minutes due to a hamstring problem.

Those problems intensified with Liverpool’s first genuine attack in the 18th minute when Curtis Jones, enjoying a stand-out night in Portugal, cut in on his right foot to fire in a low shot which Costa weakly parried into Zaidu Sanusi and Salah pounced from close range.

If questions were asked about the Porto’s goalkeeper for that, his decision-making seconds before half-time beggared belief.

A sweeping move from left wing to right allowed Milner to whip a low cross into the six-yard area where Costa inexplicably put his arms behind his back to allow the ball to run to Mane, who gratefully accepted a fifth goal in five matches against the Portuguese side.

Costa denied Jota’s fierce drive early in the second half before Salah showed him how it should be done as the excellent Jones’ driving run from deep teed up the Egypt international, who took one touch before firing past Costa.

Jota hit the side netting before Klopp afforded himself the luxury of resting Salah, Mane and Milner for Sunday’s City game.

Mehdi Taremi took advantage 15 minutes from time with a diving header but there was still time for more Costa eccentrics as he raced out of his goal for a ball he was never going to get.

Firmino rolled the ball past him from 30 yards and – despite the goalkeeper’s despairing run and dive – the shot crept over the line before benefitting from a deflected Jones shot to slot home a second.