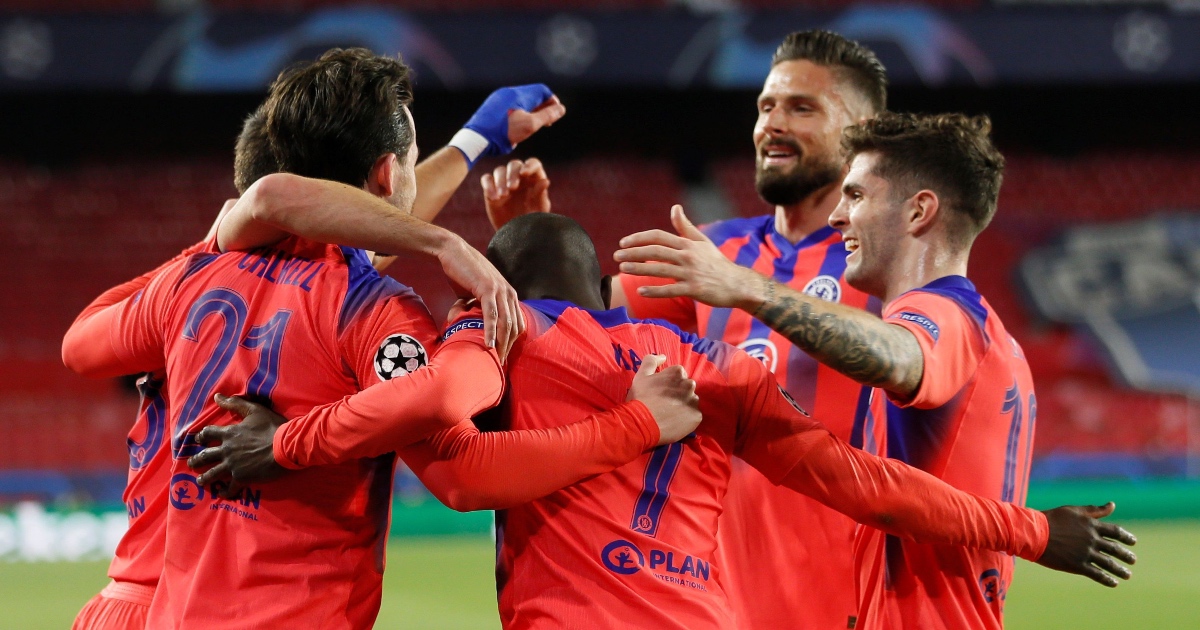 Mount latched on to Jorginho’s angled ball, spun away from the cover and slotted into the corner in a rare moment of pure quality in Spain.

Wing-back Ben Chilwell then nipped on to a loose ball before rounding Agustin Marchesin and tapping into the empty net to put the Blues in control at the tie’s halfway point.

Mount and Chilwell’s efforts count as away goals, even though both legs of the last-eight tie are being played at Sevilla’s neutral Ramon Sanchez-Pizjuan Stadium due to coronavirus travel constraints.

Chelsea were able to hit back from Saturday’s 5-2 Premier League thumping by West Brom, and also move past the training-ground spat between Antonio Rudiger and Kepa Arrizabalaga.

Mount’s fine strike separated the sides for much of the match, with the 22-year-old scoring his first Champions League goal.

Omitted from the starting XI for Thomas Tuchel’s first match at the Chelsea helm back in January for the Blues’ goalless draw with Wolves, Mount has quickly won the German manager’s trust.

Chilwell has had to battle hard with Marcos Alonso for game time on the left flank, but the 24-year-old capped an impressive showing with a stunning late solo goal.

Chelsea’s first period of considered play yielded a vital goal, allowing the Blues to take a 1-0 lead into half-time.

Receiving the ball and rolling the Porto cover all in one foul swoop, Mount opened his body and then slotted into the far corner.

The Blues dominated possession but Porto still had their first-half chances.

Zaidu Sanusi failed to connect when a cross could have caused all sorts of problems.

Cesar Azpilicueta marked his 150th game as Chelsea captain by producing a vial block on a Pepe shot.

Mendy tapped Otavio’s corner away from goal, and was left relieved when Sanusi hooked the knock-down over the bar.

Pepe drew a smart Mendy save from a corner, and then Marko Grujic headed into the ground when a better connection could have put the squeeze on the Blues.

Chelsea started the second-half with a pacey counter-attack, only for the unmarked Timo Werner to head over from Mount’s teasing cross.

Marega caught Rudiger napping to sneak in behind Chelsea’s defence in a fine chance for Porto, but Mendy was quick off his line, cut down the angle and conjured an excellent stop.

Porto continued to grow into the half, and Luis Diaz whipped just wide from 20 yards in another warning sign for the Blues.

Rudiger’s long-range pot shot forced Marchesin into a cheap spill, Werner squared across the open goal but Kai Havertz could only bundle wide.

Changes finally came for Chelsea just after the hour, with Christian Pulisic and Olivier Giroud replacing the struggling Werner and Havertz.

Pulisic broke away and blasted against the crossbar on a late Chelsea break after a smart tee-up from Giroud, but the Blues still managed to find a crucial second goal.

Jesus Corona slipped and bungled receiving a long ball, opening the door for the onrushing Chilwell.

The former Leicester left-back raced on to the ball, cut away from the covering defenders, tiptoed round Marchesin and tapped home for a fine individual effort.