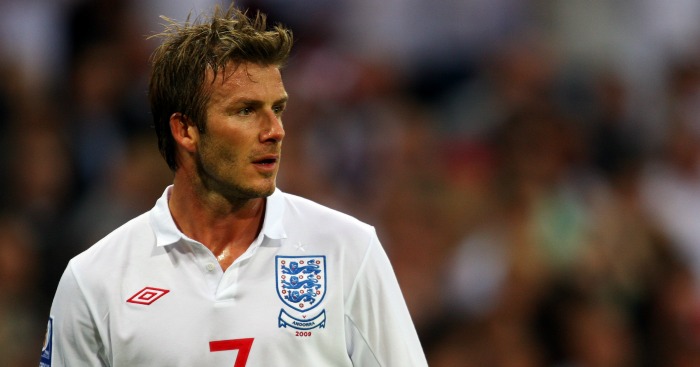 It was a baptist church on Nottingham’s Mansfield Road that embodied the witch hunt perfectly. ‘God forgives even David Beckham,’ blinked the neon yellow sign outside, referencing the events of June 30, 1998. ‘Ten heroic lions and one stupid boy,’ the Daily Mirror’s headline read on the morning after the fateful night before.

The Mirror would offer readers a picture of Beckham to use as a dartboard, while West Ham supporters passed around 10,000 red cards to taunt England’s villain. Outside a pub in South Norwood in London, a man was told by police to take down a homemade effigy of Beckham that had been strung up by rope as if hanging from a gallows. Boy wonder had quickly become national pariah.

Three years later, and Beckham is England’s hero. His last-minute free-kick against Greece had not just saved the nation’s hopes of automatic World Cup qualification, but completed one of the most pronounced comebacks in the history of English football. This is not just a career rejuvenated, but a reputation remade.

Most impressively, this redemption was achieved while Beckham played for Manchester United, the most successful – and therefore most hated – club in the land. By October 2001, Beckham could have been canonised on the Old Trafford turf without complaint. Ten England players and one heroic lion.

The hateful reaction to Beckham’s sending-off against Argentina in 1998 was indicative not just of England’s desperation for tournament success, but also the mistrust of Brand Beckham. By 1998, he was a player with ideas above his station in the eyes of at least half the nation. The pop star girlfriend, constantly changing haircut and fashion decisions (Jean-Paul Gaultier sarong and all) clashed with England’s expectation of a sporting superstar. Twice I witnessed first-hand groups of West Ham supporters calling Beckham a “fucking poof” at Upton Park; the crime was having bleached blonde hair.

It was hardly Beckham’s fault that he was young, good-looking and successful, but the green-eyed monster still grumbled and groaned. England’s World Cup exit caused mourning, but Beckham’s own demise prompted cackles and hoots of derision. It was the Daily Telegraph who went in hardest: ‘This Gaultier-saronged, Posh Spiced, Cooled Britannia, look-at-me, what-a-lad, loadsamoney, sex-and-shopping, fame-schooled, daytime-TV, over-coiffed twerp did not, of course, mean any harm. Like almost everything stupid that makes English life less fun than it could be and should be, it was only “messing about”. As always, other people have to clear up the mess.’ This was not merely a sporting mistake, but cultural comeuppance.

Beckham’s emphatic rebounding from his lowest ebb was not his greatest feat; that lay in the manner of his absolution. For Beckham did not simply fall back into line, achieving acceptance through conformity; he pulled English football forward to meet him. Beckham was not English football’s first superstar, but he did wave in a new age of footballer as celebrity. English football would not have been left behind without him, but Beckham increased the sport’s profile across every continent of the world.

Beckham was also the perfect poster boy for the Premier League, the face to sell a competition suddenly awash with more money than it had ever imagined. In 1994, Chris Sutton became the first English player to be paid £10,000 a week when moving to Blackburn Rovers. Eight years later, Beckham was the world’s highest-paid player, earning £11m a year after endorsements.

There are very few sportspeople who transcend sport, become pillars of their culture as well as profession: Sachin Tendulkar, Tiger Woods, Muhammed Ali, Don Bradman, Michael Jordan, Mia Hamm and, for a time, David Beckham. What Beckham wore sold out. Where Beckham ate was fully booked. What Beckham did was attempted on pitches in every corner of the globe. He became a walking billboard.

Yet Beckham was not principally a cultural behemoth, but an ambassador for English football. He embraced the trappings of fame without losing sight of the game, thus managing to simultaneously act as a sexual icon, fashion icon and sporting icon. In doing so, Beckham changed the rose-tinted and archaic view of our sporting champions, which had progressed from stiff upper lip and genteel upbringing to rough-and-ready muscular passion, updating it appropriately for a modern, multicultural Britain. He was, to coin a particularly awful phrase, Britain’s first metrosexual sporting hero.

Beckham’s fame is also of the indelible type, far removed from the ‘here today, who tomorrow’ celebrity world that exists on his doorstep. He has not played for three years and not played for his country since 2009, yet watch the reaction from a room of seven or eight-year-olds in any school in England when Beckham walks into the room to witness the everlasting effect of his mania. All this for a man who says he “just has a good right foot”.

Part of Beckham’s iconic status is to be found in that self-assessment, for it encapsulates the humility that keeps him grounded, and therefore so liked. Beckham seems comfortable with fame but only through learned behaviour, accepting it without ever revelling in the limelight. It is highly unusual for someone so ubiquitous to be so popular. Beckham is adored and admired by many, but disliked by very few. It is equally rare for anyone under the age of 50 to be afforded the status of national treasure; Beckham did so with 15 years to spare.

Sir Alex Ferguson famously accused Beckham of changing after getting married – “Getting married into that entertainment scene was a difficult thing – from that moment, his life was never going to be the same. He is such a big celebrity, football is only a small part” – but if that was the case it was rarely to the detriment of his form. Unlike George Best before him, the fashion and fame didn’t ruin Beckham, it made him. Such was his moral compass that every minute in the limelight was accounted for with at least double that time on the training ground.

It is this hard work and drive that underpinned everything Beckham achieved, the soundtrack to his redemption and the key to his popularity. His is the fairy-tale journey with a non-fiction methodology.

“David Beckham is Britain’s finest striker of a football not because of God-given talent but because he practises with a relentless application that the vast majority of less gifted players wouldn’t contemplate,” Ferguson once said, and therein lies the secret to the success of his Class of ‘92. Gary Neville, Phil Neville, Nicky Butt and Beckham were all very good footballers – I’m damning with more-than-faint praise – who maximised their ability through determination and hunger.

Never was this more true than in the case of Beckham, who studied free-kicks and crosses after the post-World Cup ‘98 criticism so fastidiously that he became like a monk on a journey to enlightenment. Beckham would speak years later about his obsessive compulsive tendencies, but this was a means to staying strong amid adversity. It transformed him into the best crosser and free-kick taker in the game, and one of the best of all time on both counts.

Throughout his career, Beckham’s commitment to practice was notorious, less deliberate tactic and more natural instinct. “I remember being 13 and seeing my mum looking after three kids and then still working until 11pm cutting hair,” Beckham said in an interview with the Daily Telegraph in 2015. “My dad used to go out at 6am and come back at night covered in oil stains from working in the kitchens. They instilled that hard work ethic into me, and I want to do the same for my children.”

The defining moment in Beckham’s career came not in 1998 or 2001, but in November 2000 when he was made England captain for the first time under Peter Taylor, a decision ratified by Sven-Goran Eriksson. After battling to alter his post-Diego Simeone reputation, Beckham thrived when handed responsibility. The following season was his best in Manchester United colours, but the armband gave Beckham an increased clarity in his role as leader through example. From St Etienne onwards, his career had been a fight not to let anyone down; this was the recognition of that fight.

The greatest thing about Beckham’s free-kicks were that he, the goalkeeper, defensive wall and everyone watching knew what he was trying to do, yet they were impossible to stop. They became a battle not between Beckham and the opposition, but Beckham and the ball. If he placed it in the corner of the goal with the trajectory and pace that he practiced for hours on end, nothing else mattered.

On that Saturday afternoon, with England’s hopes fading, Beckham left the mortal football world and entered the ethereal. There were people watching hundreds of miles away who were shaking uncontrollably at the enormity of the situation, unable to control their emotions. The technique demonstrated by England’s captain was remarkable, but the calmness under intense pressure was unfathomable. For a generation, it remains the greatest single moment of football fandom, when a nation rejoiced and anointed its king.

National treasure status is granted only partly through your professional acts; more is needed to lift you firmly into the bosom of a population. For Beckham, this comes through warmth of personality, even to those who have never met him. Despite past accusations of infidelity, the majority view Beckham as the best of all the good eggs, every career move made with the best of intentions. Whether it be forming the David Beckham Academy, donating his £170,000- a-week wages to a children’s hospital when at Paris St Germain or moving to Los Angeles, Beckham’s decisions are made with others at heart alongside his own ambitions. Not all come off, but you cannot fault the intentions; this is an intrinsically decent man.

That adds a ‘boy next door’ element to Beckham’s appeal. He is the fresh-faced, local lad done good, a reason for children to follow their dreams. Any shortfall in natural talent can be bridged by determination and belief.

“I just want people to see me as a hardworking footballer, someone that’s passionate about the game, someone that – every time I stepped on the pitch – I’ve given everything that I have, because that’s how I feel,” Beckham said after retiring. “That’s how I look back on it and hope people will see me.” How could they see anything else?

In that quote lies Beckham’s true appeal. He was a prototype for a new breed of footballer, but one with an old-fashioned outlook on life. He had all the trappings of fame, but none of the airs or graces that many celebrities use to willfully separate themselves from the hoi polloi. Beckham was a leader of English football, but only through example. In all the right ways, he was a, and perhaps even the – sportsman of our times.