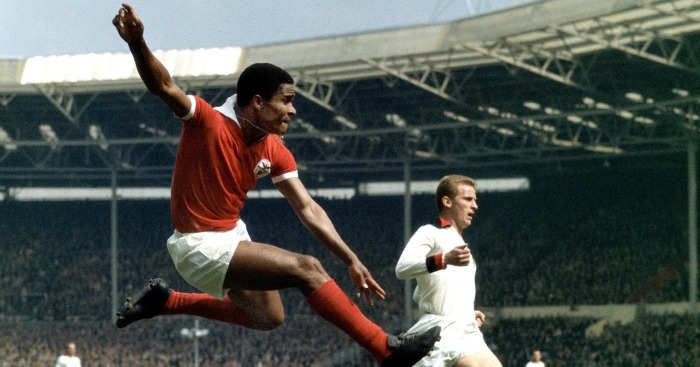 On January 6, 2014, president Anibal Cavaco Silva announced that Portugal would enter three days of official mourning. “The entire country is officially mourning Eusebio’s death,” President Silva said. “The best way to pay tribute to him is by following his example, not only as an athlete but also as a human being.” It is hard to envisage the passing of an English sportsperson inspiring that level of tribute, particularly one who died in relative old age.

On that rainy Monday afternoon, thousands gathered in Benfica’s Estadio de Luz to bid farewell to their greatest ever player. ‘I haven’t come to say goodbye, but to say thank you,’ a banner in the stands read. As the body of Eusébio da Silva Ferreira was brought out in a coffin and placed on a golden plinth in the centre circle, fans cried in the stands and chanted his name.

“Portugal is mourning. Eusebio, the King of Portugal’s 1966 team and the eternal symbol of the country, national team and Benfica passed away,” Benfica’s statement read. During their next game, the Classico against Porto, the players’ shirts each had ‘Eusebio’ on the back.

By the time the funeral cortege had done a circuit of the stadium, passed through the lined streets of Lisbon, paused at the city hall for dignitaries to pay their respects and arrived at Lumiar cemetery following mass at the seminary church, night was falling. Still the crowds stayed with his body A country was united in grief, gratitude and pride.

In July 2015, Eusebio’s body was moved to Lisbon’s National Pantheon after Parliament voted unanimously for him to be settled alongside Portugal’s great and good, the first footballer to be honoured in such a way. Not bad for a boy from the poorest area of Mozambique’s capital Maputo.

Over two years after his death, it would still be fair to describe Eusebio as football’s mystery man. This is a player who scored 749 goals in 745 matches, yet I would challenge anyone to recall more than one or two of those 749. Eusebio is widely regarded as one of the ten greatest players of all time, yet is rarely given the fanfare of his peers. His was a career played in the shadows, before football became a truly global, 24-hour obsession.

Eusebio was born in the Mafalala of Maputo, Mozambique’s oldest township, where the designated ‘white’ part of the city met the black population living in desperate poverty. He was the fourth of eight children of a white railway mechanic from Angola and a black mother. When his father passed away when Eusebio was eight, nothing more than a desperate battle for survival against the odds seemed inevitable.

Football was Eusebio’s escape, playing bare feet on the streets instead of attending school, but it became his saviour. He started playing in a local team (Os Brasileiros), Eusebio later describing how the balls would be made of socks stuffed with old newspapers. The term ‘street football’ has been bastardised to include any player from a difficult background; in Eusebio’s case it should be taken literally.

The story of how Eusebio got his big break has, like any incredible yarn, been embellished over the years. What is certain is that a Sao Paulo coach got talking to a fellow customer in a Lisbon barbershop, having recently toured Mozambique with his team. He spoke of a young player who had the physique of a boxer and the pace of a 100m sprinter. That other customer was legendary Benfica coach Bela Guttman, who flew to Portugal to arrange a deal. Eusebio became the first high-profile African football export.

With Sporting Lourenço Marques as a feeder club for Sporting Clube de Portugal, there are many apocryphal details about the outrage surrounding Eusebio’s signing. The man himself tells a simpler, humbler tale.

“Benfica made a nice approach,” he told the Guardian. “They signed the contract with my mother and she got the money. She put it in a bank in Mozambique, with a clause on it, saying that if her son didn’t go to Portugal and become a great footballer she would pay the money back, because she had a good heart.

“There was a newspaper picture of her with all the money on the table with her arms round it. I had never seen such money in my life. Sporting tried to spread the story that I’d stitched them up, but it was the other way round, because they tried to take me for free while Benfica were willing to pay.” Eusebio was forced into hiding on the Algarve.

When he finally made his debut six months later, he scored a hat-trick. Never has a player been more worth the wait and perseverance. He would score 473 goals in 451 games for Benfica over 15 years. He is still the second-highest scorer in Portuguese league history, and his international record of 41 in 64 matches is the third highest for A Seleccao. Cristiano Ronaldo may now boast 15 more, but he also has 61 more caps. It is no exaggeration to say that Eusebio was a serious rival to Pele for a large proportion of their careers.

We may now be obsessed by the rapid development of our sporting heroes, but Eusebio’s story is football’s ultimate rags-to-riches tale. Less than three years after playing for free (or maybe a hot meal) for Sporting Lourenço Marques in Maputo, he was scoring twice in the European Cup final as Benfica beat Real Madrid 5-3. Put that in your beetroot factory and smoke it.

Spending almost his entire career at Benfica in an age long before televised foreign football, Eusebio’s success was achieved away from global interest. Eleven league titles, two European Golden Boots, one Ballon D’Or, three times top scorer in the European Cup and winner of the trophy in 1962. Only fragments of his career were ever seen outside Portugal, a veil pierced by several high-profile exceptions.

The first of those came in the 1966 World Cup, which became a four-week-long demonstration of Eusebio’s talent when he won the Golden Boot with nine goals in six games. Only three players have ever scored more in a single World Cup.

It is worth noting that Portugal – then a country of less than nine million – were hardly a dominant force in world football during Eusebio’s career. 1966 was their only participation in a major tournament between 1930 and 1984, and their only World Cup knock-out participation until 2006. The phrase ‘one-man team’ is reductive, but Eusebio ran the phrase close.

There can be no stronger evidence than during Portugal’s quarter-final at Goodison, where they trailed North Korea 3-0 after 25 minutes. Eusebio then scored four times, winning one of his penalties with a run from his own half, to drag his team through to a semi-final against England. Eusebio would weep uncontrollably after Portugal’s elimination, his goal not enough to claw back the hosts’ two-goal lead.

The other iconic Eusebio moment demonstrates not his talent, but his personality. It came in the European Cup final of 1968 against Manchester United, when Eusebio saw his shot saved expertly by goalkeeper Alex Stepney. Rather than express his disappointment, Eusebio stood for five seconds to applaud Stepney’s save. To the opposition players and crowd this seemed like an extremely noble act. To Eusebio, it was simple logic. You played well, so I should salute that.

“That’s the kind of man he was: the respect he gave to me and to football was tremendous,” Stepney wrote in 2014. “We met several times and talked about it and the respect of the man was absolutely unbelievable. To play against him was an honour.”

Eusebio’s attitude became famous among his peers both during and after his career. He remained intensely humble, forever setting aside time to meet with supporters and pass on his advice. He played the game as he lived his life, with a Corinthian spirit. He retained an appreciation of just how unlikely his journey had been, and continually looked after those he had left behind.

“It all started in Mozambique and ended with a life in Portugal,” Eusebio said in 2004. “The journey has been long and tough, but it has been undertaken out of love. Which is probably why I don’t want this conversation about football ever to end. I have devoted my life to football. I think, God forbid, the day I die it will be with football on my mind. I live and will die for football.”

We will never know whether that now-tragic last line is true, but what we do know is that Eusebio will forever be on the mind of everyone in Portugal. He is a representation not just of sporting excellence and individual decency, but of integration and unity.

“Eusebio is one of the greatest footballers of the history of football,” said Jose Mourinho after the great man’s death. “But for Portugal he means more than that. No colour, no clubs, no political sides.” The barefooted kid from Mafalala had been crowned ‘O Rei’ – the king of Portugal.