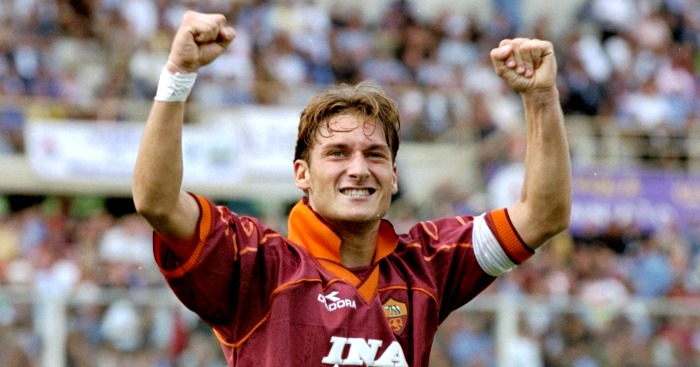 There is an anecdote regarding Roberto Mancini’s attempted persuasion of Roma midfielder Daniele de Rossi to join him at Manchester City:

“Do you want to end up like Totti?” Mancini is reported to have said to Roma’s vice-captain. “A great player who has never won anything?”

It is possible to imagine a more misjudged question, but you would have to think for some time. On the same issue, Glenn Hoddle ran Mancini close: “No, he’s not top drawer,” Hoddle said of Totti as part of Sky Sports’ Champions League coverage. “He’d have moved on if he was. Someone would’ve come and got him.” Those campaigning for Hoddle to be England’s next manager should feel even more foolish.

The misinterpretation of Francesco Totti’s raison d’etre by both is spectacular. Winning trophies is an important part of any player’s career, but for Totti the greatest significance lies in the method and the meaning, not the triumph. Manchester United, Real Madrid and Barcelona all tried to tempt him from Rome, but its king was not for abdicating. For Totti, three points in the Stadio Olimpico outweighs three trophies anywhere else.

If Rome is the Eternal City, Totti is its eternal leader. Having made his debut as a 16-year-old in 1993, last month he signed a contract to play until the end of the coming season. One man’s playing career will span 28% of Roma’s history, and he’s already signed up for six years as a technical director. No wonder he says that Giallorossi No. 10 shirt feels like “a second skin”.

It is difficult to envisage a man more representative of his city than Totti, the modern brother of Romulus and Remus. Born and raised in Porta Metronia, five miles from the Stadio Olimpico, Totti became obsessed by football from the age of three, regularly playing with -and embarrassing – older children on the streets of his neighbourhood. Totti’s Roman roots stretch back seven generations, and his face adorns murals and posters across Italy’s capital. He is worshipped by Roma fans and respected by Lazio’s, a walking, talking monument of the city. Totti is, as Claudio Ranieri once said, “as important as the Colosseum is to Rome”. “Francesco remains the undisputed symbol of Roma,” Carlo Ancelotti says; it will ever be thus.

The duration and consistency of Totti’s career is astounding, 786 matches for his boyhood and beloved club. Not only is he Roma’s highest appearance-maker and goalscorer in every competition, but also the second highest goalscorer in Serie A history (250) and third highest appearance maker (619). Totti was Serie A’s youngest ever captain and is the Champions League’s oldest ever goalscorer. He is also the top scorer and appearance-maker in Italy’s Derby della Capitale, naturally. Every time you think the flames are fading, Totti throws another log on the fire.

Yet to Totti, loyalty to Roma was merely a state of mind. His life would feel less complete away from Roma and Rome, so why leave? Only the passing of time can force his departure from the Olimpico pitch.

Totti’s confidence in his own talent is blended with a humility that allows for introspection. Totti’s work for Roma’s poorest communities is notorious, as is his self-mockery. Roma’s captain helped to create a book filled entirely with jokes at his expense, deriding his intelligence, ego and behaviour. Totti stipulated that all the money raised by the book went to projects helping the elderly in Rome and homeless children in the Democratic Republic of Congo. It was a bestseller.

It is this understanding of his own role, duty even, that makes Totti so endearing to supporters not just of Roma but across the world. If you were to choose one footballer to convert someone to the game, the perfect blend of natural talent, dedication, personality and physical specimen, there should be no competition.

At his peak, to watch Totti play live for Roma was an extremely odd experience. Football remained a team sport, but the team was powered by one man. Such was the will of Totti to influence play – and a reciprocal will of the home crowd for him to do so – there was the No. 10 and then the other ten. That is not to say that Roma were a one-man team – for there were wonderful players around him – but Totti was the player you noticed first, the foundations around whom the squad and its attacking moves were built. In some teams this could be a negative, but Totti’s desire to create chances as well as score them made it a powerful force for good. Even during Roma’s barren years, every game was touched by Totti’s majesty.

Starting out as a No. 10, Totti was moved into a position as a central forward by Luciano Spalletti in 2005, who used him as a false nine. Totti would have to do less defensive running as he moved into his thirties, but could still drop deep and let attacking midfielders overlap. His ability to hold up the ball and bring others into play is at least as good as most other traditional centre-forwards. “Giving him the ball is like putting it in the bank,” as Spalletti said.

Yet it is Totti’s vision and skill that will be most fondly remembered, the first-time passes through, round and over a defence for a forward to chase and the one-touch flicks and backheels to play a pass that a defender’s brain had failed to even compute as a possibility. Gabriel Batistuta described him as the best strike partner he had ever played with: “He just knows everyone, everything.”

If Totti is defined by one skill, it is his Cucchiaio, translated literally as ‘the spoon’. This is Totti’s method of chipping a goalkeeper from outside the area, by feigning his foot movement to stab the ball as with a Panenka penalty. From open play, Totti’s chips had a mesmeric effect by slowing down the game, magnificently disguised and nonchalantly executed with an ease that should make him blush.

There is a cliche about players ‘having the ball on a string’, but Totti’s Cucchiai is that to the maximum. So in control was he that he seemed able to alter the angle of the ball’s movement even after it had left his boot to create an impossible trajectory into the goal. Totti could even put curl on these technically intricate shots. The results were incredible.

The length of Totti’s career tends to impact negatively on his reputation, overshadowing an eight-year period of true greatness between 2000 and 2007. During that time, Totti won the World Cup, Scudetto (four times a runner-up), was named Serie A player of the year twice and Italian footballer of the year five times, won the European Golden Boot at the age of 31 and twice won Serie A’s goal of the season award. He also broke his leg and tore cruciate ligaments. Some players’ glory days last for months; Totti’s lasted for seasons.

That Totti never received wider recognition is at least partly due to the opinion of those like Hoddle. Roma’s captain has never played in a European semi-final, never finished higher than fifth in the Ballon D’Or voting or higher than tenth in the World Player of the year award. Michael Owen won the award in 2001 with 176 votes; Totti came fifth with 57. After his majestic 2006/07 season, Totti came a place behind Freddie Kanoute.

If that adds a blue tinge to Rome’s golden boy, Totti has plenty enough respect in the bank to change that mood. Franz Beckenbauer mourned his lack of Ballon D’Or, while Luis Enrique called him “the king of the world”. Arrigo Sacchi says that Totti is “one of the greatest players I have ever seen”, while Marcello Lippi hails him as “a monument of Italian football”. Both Pele and Diego Maradona have called him the best player in the world, and we know how much it takes those two to agree.

For Totti, it has never been about recognition outside of Rome, and the supporters of a club who became his family. “Roma is everything to me, everything a person can want: passion, love, joy – the team I have always supported and always will,” he says, and you believe every word. When he retires, a part of Roma dies with him.

“Un Capitano c’e’ solo un Capitano,” is the chant that comes down from the Olimpico stands; for them there will always only ever be one captain of Roma. Whoever wears that armband will be under no illusion of the man they have to follow: Francesco Totti is a country, city and fanatical support in footballer form. He’s all the more magnificent for it.

Francesco Totti portrait of an icon