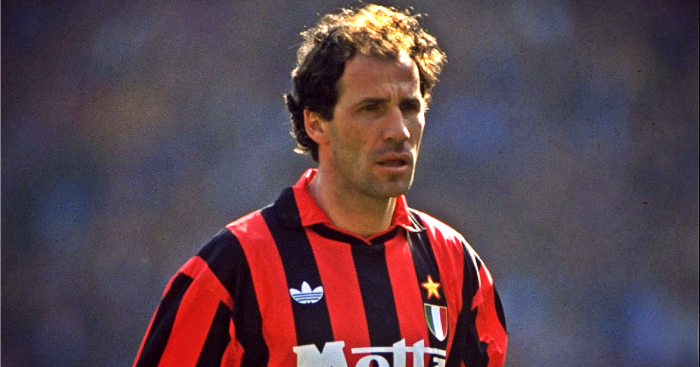 The mistakes made by clubs that reject players who subsequently go on to greatness is a rich source of embarrassment, from Jack Walker’s “Why do you want to sign Zinedine Zidane when we have Tim Sherwood?” to Flamengo rejecting Ronaldo at the age of 14 to Independiente telling Javier Zanetti he was too small to make it as a professional. Yet hindsight can never have been more damning than in the case of Franco Baresi.

With his 16-year-old brother Giuseppe already at the club, Franco gained a trial at Internazionale at the age of 14. Rather than signing him, Inter expressed doubts about Franco’s physical development, and asked him to come back the following year. Stung by the disappointment, Baresi asked for a trial at Milan instead, and was immediately taken on. “I was always a Milanista anyway,” Baresi says. Twenty years and 719 matches later, he was named Milan’s Player of the Century, the captain of one of the game’s most successful club sides. In that same two decades, Inter won two Serie A titles.

If Baresi’s response to this initial adversity was admirable, it became a running theme during his career. Both of his parents died before he turned 16, a tragedy he believes played a part in him and his brother making it as professionals. “We had to roll up our sleeves, and grow up quickly,” he says. “My brother and I both wanted to make something of ourselves through this sport that we were so passionate about. We had some luck and some help, but above all our character helped us.”

It is hardly controversial to call Baresi the most complete – and perhaps even the best – defender of all time. The greatest attacking players have the ability to manufacture time, a combination of vision and first touch affording them vital fractions of a second to compose play. If they created time, Baresi did the opposite. Such was the Italian’s masterful reading of the game, he would be first to every through ball, snuffing out danger like a psychic fireman. He was the time destroyer; every second you had on the ball in his opposition at least halved. Some defenders can lay claim to be ahead of the game, on the next page. Baresi was already flicking through the index.

“A lot of the time, he would know what the attacker was going to do before they knew themselves,” Ruud Gullit once said of his former teammate. There is no exaggeration there for effect. Baresi had a greater anticipation and understanding of attacking strategies than perhaps any other defender in the game’s history.

“It’s not something you can learn,” Baresi told FourFourTwo in 2009, almost apologetic that he could not impart any further wisdom. “It’s a natural thing. Of course you can improve it, you can grow with experience, but it’s one of those natural gifts.”

Despite that defensive excellence, Baresi’s role was at least two-fold. Within seconds of winning back the ball, he would be looking forward. Next came either the clipped pass into feet, or the run forward out of defence. With his shirt untucked over inexplicably short shorts, Baresi played the part of playmaker with consummate ease. When asked to name his childhood heroes, each one was an attacking player. “Oh, probably Ruud Krol then,” he said, when pushed to pick an actual defender.

It would be foolish to think that Baresi was an effortlessly polished player, however, for you don’t survive and thrive in Serie A’s 1980s without being able to handle yourself. “After a game against Baresi, your feet need loads of ice and anti-inflammatories,” said Gianfranco Zola when naming him as the best defender he’d ever faced.

Ronald Koeman’s memory is slightly more menacing: “He was hard and would stop at nothing to win the ball.” The word ‘hard’ has become increasingly synonymous with obvious displays of aggression, but Baresi’s toughness was more understated, a latent threat.

In the Milan derby of 1989, Baresi played for over an hour with a broken arm after getting a kick from Jurgen Klinsmann, Milan’s captain only revealing the true extent of his pain after the final whistle. After keeping a clean sheet, of course.

Even that anecdote is rendered insignificant by Baresi’s efforts during World Cup ‘94, when he tore his meniscus (the cartilage between the knee joints) in the second game against Norway. Despite being advised to return to Italy and have the necessary operation in preparation for the new domestic season, Baresi demanded to have the operation immediately. Twenty-four days later, after almost continuous rehabilitation work, Baresi was fit for the final, an extraordinary feat. His missed penalty in the shoot-out after keeping a clean sheet was a cruel ending to such a magnificent story, but the defender took it in typically humble manner: “If there’s going to be a winner, then someone has to lose, but all the same it hurt. It must have been destiny; I guess Brazil deserved it more than us.”

Former Milan manager Niels Liedholm described Baresi as “a veteran at 18”, and there’s certainly something in that. When picturing him, you think not of a baby face but a man with the rugged looks of an Italian hill farmer. That is at least partly explained by his late recognition on the global stage. Baresi played in his first World Cup match at the age of 30. Naturally, he was named in the team of the tournament at Italia ’90.

Not content with being one of the greatest defenders, Baresi’s name has also become a byword for loyalty, the ultimate one-club man. Milan may have become the greatest team in the world under his captaincy, but he twice stayed after relegation to help the Rossoneri rebuild. The second of those Serie B campaigns came after Baresi was a (non-playing) member of Italy’s World Cup-winning squad of 1982, with the defender named Milan captain at the age of 22. Fifteen years later, as Baresi retired, he had won five Serie A titles, three European Cups and nine other domestic honours. Black, white and red all over.

Baresi was named runner-up to Marco van Basten in the 1989 Ballon D’Or, but cared little for individual accolades. He picks Paolo Maldini as the greatest ever Italian player and rates Juventus’ defence in the early 1980s (Antonio Cabrini, Claudio Gentile and Gaetano Scirea) higher than the famous Milan quartet of Baresi, Maldini, Alessandro Costacurta and Mauro Tassotti. That defence formed part of Arrigo Sacchi’s great team that defended the European Cup in 1989 and 1990. It was arguably the greatest club team in history.

Milan’s three greatest servants run like the aorta through the club’s modern history: Gianni Rivera, Franco Baresi, Paolo Maldini. Between them, these three players spanned a 49-year period between 1960 and 2009. Not only does that account for almost half the club’s lifespan, but it covers 38 of their 47 major trophies.

If this trio are Milan’s lifeblood, there is no doubt who belongs in the centre spot on the podium. In the eyes of the Milanese, there is only one. ‘There is only one captain, Baresi,’ is the banner still passed across the San Siro’s Curva Sud. He was, is, and always will be Milan’s greatest: Il Capitano.

Baresi was a player who made mutual exclusivities inclusive: Powerful but elegant, ball-playing but a hard tackler, a great defender who so often started – and played a part in – the attacks of the greatest ever Milan side. The comparisons with Franz Beckenbauer before him became cliched, but with good reason. Baresi was the last great libero.

“I think there’ll always be good defenders in Italy, because knowing how to defend is part of our culture,” Franco Baresi once said. That may be true, but every group needs its leader and captain. No matter how many more “good” defenders Italy creates, none will be as great as Baresi. As Brazilian great Zico once said, “Playing with Baresi was half a goal in itself.”