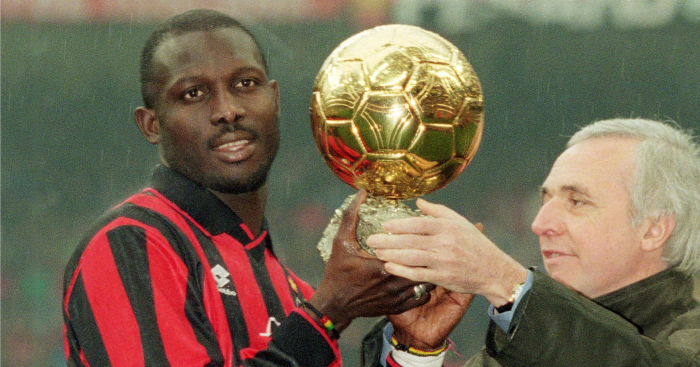 It’s 2008, and George Weah is walking out onto the pitch in the SKD Stadium in Monrovia, Liberia’s national football stadium. The crowd, 30,000 people packed in behind metal fences, are screaming his name: “Weah, Weah, Weah.” Such is their frenzied pride, it is as if they are chanting the name of the country itself. Such is Weah’s effect on Liberians, they might as well be.

Weah had retired five years earlier, but he would forever be Liberia’s sporting deity. Born and raised in the Clara Town slum on the edge of the capital, children today still gather to play on the same muddy pitch Weah graced in the mid-1970s. The hours and days spent in bare feet and with ball offer the perfect escape from the hardship of everyday life.

It is difficult for us to comprehend just how important Weah is to Liberia and its capital. This is a city perched on the west coast of Africa with only a small strip of beach separating the Atlantic Ocean from the ramshackle houses of Bushrod Island. The presence of United Nations Drive, running like a vein through the centre of Clara Town, gives an indication of just how desperate the situation has been, and still is. Monrovia is the world’s wettest capital city, the rain bringing waves of mosquitoes to an area still getting over the Ebola crisis. Forty-one per cent of in-patient deaths of children under five are as a result of malaria. Liberia might mean ‘land of the free’ in Latin, but precious few get the opportunity to work their way out of poverty.

Yet in Weah, this ramshackle country has a hero. There have been far more accomplished winners of the World Player of the Year award, but there can never be any more important or inspiring victor. Weah was the first African to win any individual international award, voted African Player of the Year on three occasions, and the continent’s Player of the Century in 1999. This is Africa’s greatest footballer of all time.

For Weah to achieved that feat having been born and raised in Liberia is astonishing. This is a country where over three-quarters of the population live below the poverty line, where 1% have access to electricity and 80% are unemployed. In a United Nations list of countries ranked by their GDP per capita, Liberia ranks 189th out of 194. And there he sits, King George, sandwiched between Hristo Stoichkov and Matthias Sammer for the Ballon D’Or and between Romario and Ronaldo for the World Player of the Year. 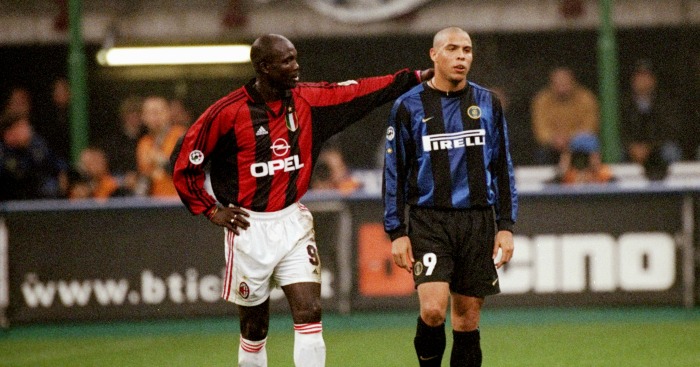 Starting his career in Monrovia at Mighty Barrolle and the wonderfully named Invincible Eleven, Weah moved to Tonnerre Yaoundé in Cameroon at the age of 21. It was not until he had almost turned 22 that Arsene Wenger brought him to Europe and Monaco. The manager was shocked by the quality of his new recruit.

“Weah amazed me with his talent,” Wenger said. “For me it was like a child discovering a chocolate bunny in his garden at Easter. I have never seen any player explode on to the scene like he did.”

Having scored 66 times in four seasons at Monaco, Weah moved to Paris St Germain. It was at the Parc des Princes that the striker starting truly making waves, leading PSG to a league title, three domestic cups and the semi-finals of the UEFA Cup and Cup Winners’ Cup. He also top scored in the 1994/95 Champions League, and scored 16 goals in 25 European matches for the club.

Shortly after moving to Milan – it is hard to believe now that he was almost 29 at the time – Weah was named the world’s best player. In an act of typical humility, he dedicated his award to Wenger: “Arsene Wenger made me not just the player I am today, but also the man I am.”

Not leaving Milan until he was 33, Weah astonished the Italian public with his speed and skill. He was a very modern striker, comfortable both in the air and dribbling with ball at feet, his pace allowing him to create his own chances with a burst of speed and drop of the shoulder. His famous goals against Verona and Bayern Munich showed off every one of his attributes in excelsis.

“In the history of the game, I have never seen power and speed like George Weah,” says Thierry Henry. This was a natural wonder, honed through hard work and propelled by a drive to make the most of an opportunity few in his homeland would be afforded.Weah scored 58 goals in his 147 games for the Rossoneri, winning two Scudetti. Just as at Monaco and PSG, he shocked both teammates and opposition with his quality.

“Weah surprised everyone, including myself,” says Franco Baresi. “He was unknown at international level when he came to Milan and wasn’t that young either. Yet after a few training sessions we realised he was outstanding. He was a great forward who had everything. Quick, unpredictable, great technique.” Baresi picked Weah in his all-time XI of Milan teammates, playing him alongside Marco van Basten up front. 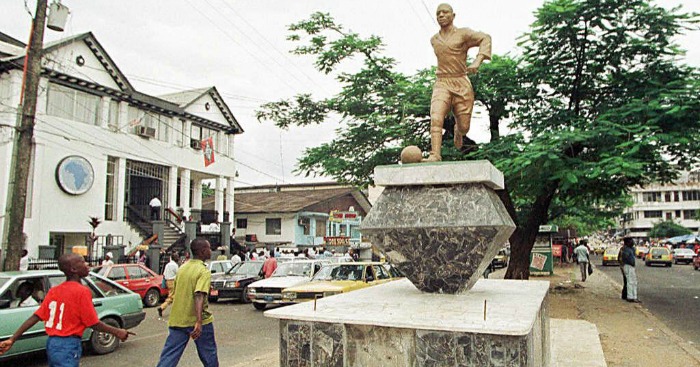 Whatever Weah’s on-field impact, it was forever destined to be dwarfed by his effect off the field. Between 1989 and 2003, a period spanning all but three years of Weah’s career, Liberia experienced two bloody civil wars. A country was torn apart, 250,000 people killed and an economy and infrastructure destroyed, including 95% of all healthcare facilities. Already stricken with poverty, Liberia had been trodden further into the dirt.

Weah realised his responsibility, appreciated his place in time and the importance of the country’s national team. As well as the star player, he was also part-time coach and often paid out of his own pocket to fund the team’s travel and accommodation for away matches.

“We have a responsibility to make the national team represent the country and portray a positive image,” Weah said. “Everyone has their destiny, but you have to make use of the opportunities. It makes me happy. I love the game. I love scoring goals. But I have always taken it seriously. It is not what the game gives you, it is what you give it.”

If that sounds like an over-estimation of football’s power for change, Idriss Kaba (general secretary of the Liberian FA), explains the real impact of Weah’s performances: “When his matches were on, the soldiers used to come past their checkpoint, lay their arms down and watch the game with us. Then they would go back, take their guns and start shooting. During a match you would not hear the sound of guns. You would not know who was a rebel and who was not a rebel. All of us were Liberian at the same time.”

Weah came within a whisker of achieving the impossible, Liberia missing out on a place at the 2002 World Cup after finishing one point behind group winners – and therefore qualifiers – Nigeria. At the age of 35, he had given it all for his country. In return, a country bowed at the feet of King George.

Even before his retirement, Weah understood the difference he could make, and the inspiration he could be. He set up Junior Professionals, a football team in Monrovia which rewarded children with competitive football for staying in school, and was involved in multiple initiatives to fight racism within the game. He was also named as a UNICEF Goodwill Ambassador, and awarded the prestigious Arthur Ashe award for courage for his humanitarian work in his home country. In 2014, with Liberia uneducated on, but badly affected by, the Ebola crisis, he recorded a song to raise awareness, credited with saving hundreds of lives.

Now a senator and leader of Liberia’s opposition party the Congress for Democratic Change, Weah is clear on his reasons for entering politics.

“Whatever you do in life, you have to do it with commitment and perseverance,” he says. “I am committed to helping my people and my country, just as much as I was committed to helping my team when I was a player. Though through war we were devastated, war also helped me to grow in my life. I want to make change in my country because I lived a life that no child should live.”

George Weah’s career should never have been possible. Starting out in a Clara Town slum and playing in bare feet with his friends – stories like these are supposed to be the stuff of daydreams and fiction. But it did happen. A poor boy from a poor family really did become the best player in the world. On the way he inspired a nation, and temporarily halted a civil war.

Weah’s experiences gave Liberians a chance to dream, when daily life was doing little else to console them. His achievements gave a generation of African footballers an example to follow. Still revered as the continent’s greatest football export, he has a simpler explanation for his popularity in Monrovia, Buchanan and beyond. “Once you take care of people,” Weah said. “People respect you.”