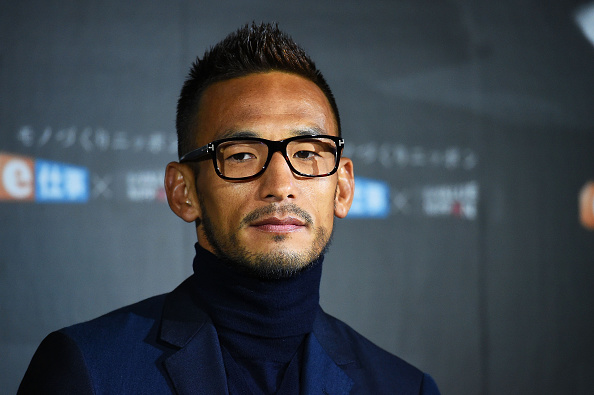 Hidetoshi Nakata was never afraid of following his heart. On June 22, 2006, five days after being named Man of the Match as Japan drew with Croatia, Nakata lay crying on the turf in Borussia Dortmund’s Westfalenstadion. Six months earlier, Japan’s greatest football export had decided that he would retire at the end of his World Cup; it had been a secret to all others. At the time of that decision, made when on loan at Sam Allardyce’s Bolton Wanderers, ‘Hide’ was just 28.

“Day after day I realised that football had just become a big business,” Nakata said years later. “I could feel that the team were playing just for money and not for the sake of having fun. I always felt that a team was like a big family, but it stopped being like that. I was sad, that’s why I stopped at only 29.”

Having walked away from the game, Nakata initially became a fashion model before deciding to travel the world for three years. Now 39, Nakata acts as a cultural ambassador for Japan, and also owns a Sake company which he has unforgivably called ‘N’ rather than ‘Hide and Sake’.

“All my life, I played just football. I didn’t know what the world was like outside of football,” Nakata explains. “I wanted to know what’s happening now in the world, and what I could do for the world.” He sounds like a gap year student off to India to “discover himself”.

It is entirely fair to comment that Nakata’s cultural impact far outweighed his raw talent. That is not to say that he was a poor player, for Nakata was two-time Asian Player of the Year, nominated for the Ballon D’Or three times and FIFA World Player of the Year on four occasions. He also won the Scudetto with Roma and was the subject of serious interest from Milan, Juventus, Arsenal and Manchester United during his time in Italy. More important was that the Italian public enjoyed watching him play.

That Nakata was not one of the greatest players of the last 20 years does not matter – and wholly misses the point – for he may well be the most influential. This is the individual most responsible for the rise of a new football frontier, the superstar that Asia needed. Nakata was the right image, in the right place, at the right time.

Nakata first burst onto the scene at World Cup ‘98, a rangy midfielder with peroxide orange hair and a fresh, carefree style. Having already been named Asian Player of the Year in 1997 – he would repeat that win a year later – he was a key factor in Japan’s first ever World Cup qualification, assisting all three goals in the play-off against Iran. Although the Samurai Blue lost every game in France, Nakata shone against Argentina. It earned him a move to Perugia, the second Japanese player after Kazu Miura to play in Serie A. Seven years later, he was the third to play in the Premier League.

The reaction to Nakata’s signing was predictable, a shirt-sale joke signing bought more as a marketing commodity than a midfielder. Many questioned whether he would have the tenacity to cope with the step up. Not only did Nakata disprove the doubters, he removed many of the existing stereotypes regarding Asian players. Two goals on his Serie A debut against Juventus immediately made Italian football sit up and take notice. Nakata became Perugia’s Gioiellino, or little jewel.

Italy had also not prepared itself for Nakata-mania. When Hide went back to Japan he was swamped at the airport, and Perugia’s games were broadcast live in Japan on pay-per-view channel WOWOW, while the terrestrial channels showed Serie A highlights. With the World Cup coming to the country but no major national team success to speak of, Japan latched on to the individual. Nakata was more popular than the Emperor.

In Italy, a 20-strong Japanese press corps was based in Perugia to give daily updates on Nakata’s personal and professional life, eventually leading to the midfielder taking to his own website to offer his thoughts rather than converse with the press. An estimated 3,000 Japanese fans came to Italy to watch Perugia’s home games and 5,000 for his debut, most making the 10,000km trip in order to watch their hero. Seventy thousand Perugia shirts were immediately ordered by adoring fans back home.

Yet Nakata’s first season in Italy was an unmitigated success on the field as well as off it. His ten league goals earned him a big-money move to Fabio Capello’s Roma. Despite preferring to roam forward as an attacking midfielder, Francesco Totti’s presence meant that Nakata was pushed into a more defensive role at the Stadio Olimpico.

Nakata played 15 games in Roma’s title victory of 2000/01 before Parma paid €28.4 million for him in July 2001. He was the most expensive Asian player in the game’s history until Son Heung-Min joined Tottenham last summer.

With World Cup 2002 approaching, the tournament leaving Europe and the Americas for the first time, Japan’s national obsession with Nakata bordered on the fanatical. He was the face of mineral water, cars, sports equipment, shoes and plenty in between. This was the start of a new footballing culture, and Nakata was the literal poster boy. Books about him sold in their hundreds of thousands, videos in their millions. Nakata may have been known as the ‘Asian David Beckham’, but you can multiply the public fever by at least ten.

By the time the World Cup was over, Nakata was the most famous person in Japan. His side had drawn 2-2 with Belgium before beating Russia and Tunisia to qualify for the knock-out stage where they were beaten by Tunisia. Junichi Inamoto actually performed better than Nakata, but there was only one megastar. He was a brand in himself, and infinitely marketable. Nakata had deals with Nike, Canon, MasterCard, J-Phones, Coca-Cola, Subaru and Sky Perfect TV.

There is no doubt that Nakata’s boy band image was exploited for financial gain throughout his career, but that should not be viewed solely as a negative. Hide was savvy and sufficiently self-aware to realise the difference his fame could make to the next generation of Asian players; no longer would they be patronised and misjudged. Eight Japanese players have since followed Nakata to Serie A, including Shunsuke Nakamura, Keisuke Honda and Yuto Nagatomo.

So too did Italy change their opinion of Nakata. This was not a playboy, a party footballer who cared more about fashion and haircuts than the game itself. In 2005, he was awarded the Knight of the Star of Italian Solidarity – one of the country’s major honours for helping to improve the nation’s image overseas.

Most of all, Hide Nakata was – like Beckham – a flagship footballer of the internet age. He was a poster boy for footballers’ progression from sportspeople to celebrities, his website read by millions of people just as the world wide web was becoming a truly universal tool. His global appeal provided a pathway for Asian players to be treated as equals.

Yet despite the unprecedented level of interest in every second of his private life, Nakata’s personality remained shy and reserved. He may have enjoyed the limelight, but also understood the opportunity he had been afforded. Few have embraced total adoration in such a positive manner.

Nakata’s charity and ambassadorial work is extensive. He is a Global Ambassador for the Special Olympics, and created a DVD of his travels in Africa which he sold to raise funds for malaria control in Congo. When thousands of people were killed in Japan’s earthquake of 2011, he auctioned off memorabilia, created a line of charity jewellry and organised a football match all to raise proceeds to help survivors.

“I immediately cancelled all my schedule,” he said. “Because I had to do something right now. I had to move right now. Sports is really big – especially football is worldwide. Football can bring and connect all the people which is very important right now and also for the future as well.”

Fame and wealth can be dangerous drugs. As the most gifted Asian footballer of his generation, Nakata was never likely to escape the trappings of celebrity lifestyle. He is a Japanese inspiration and institution, bestowed with adoration beyond any normal comprehension. Yet he managed to avoid the typical fall that follows pride, albeit in his own unorthodox way. Furthermore, a decade after his retirement he remains staunchly committed to his own principles.

“Money doesn’t need to come first – your idea and passions should come first,” Nakata says. “This is the philosophy I have been following my whole life. I played football not because of the money or to become famous, but because I loved football. I just do whatever I love. It doesn’t matter what people say, whether it’s difficult or whatever. I don’t care. Because this is my life.”

It’s impossible to argue with that sentiment. Hide Nakata may not be in Serie A’s top ten best players of the last 20 years, but in terms of cultural significance and impact, he might well be in the top one.