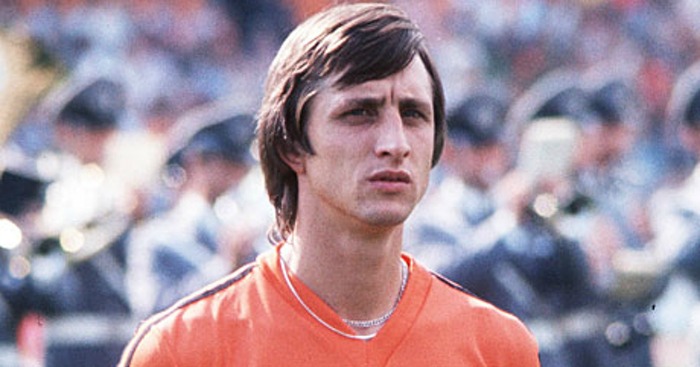 This was written just over a month ago. How horrible it is for it to be so relevant today.

“Right now, I have the feeling that I am 2-0 up in the first half of a match that has not finished yet. But I am sure I will end up winning” – Johan Cruyff, February 2016.

There is something deeply moving about a former great describing his battle against a life-threatening illness in football terms. Analogising lung cancer with a 90-minute match is Cruyff’s way of normalising something unreasonable and inhumane. This is a reminder that sport is no barrier or comfort blanket against the travails of life. Cruyff’s immortal status within the game counts for little outside football’s bubble.

Cruyff’s words also reveal a mind still obsessed by the game; as if football’s greatest thinker was ever likely to switch off. There is an accusation that the Dutch master has become sour and jaded in his older age, angry at Ajax’s fall into corporate entity and Netherlands’ pragmatic style. Cruyff’s persona occasionally slips from mournful into bitter, but he will forever be worth listening to.

‘Philosophy’ has become a hackneyed word in sport, a handy euphemism for any idea or strategy beyond the short term, but Cruyff is a football philosopher in the truest sense of the word. He could talk for hours about a topic as simple as the timing of a run or the weight of a pass. All killer, no filler, just an expert allowing thoughts to tumble out of his brain.

Former Dutch teammate Marco van Basten has his own theory on why Cruyff became such a student of the game: “Johan is so technically perfect that even as a boy he stopped being interested in that aspect of the game. That’s why he’s been very interested in tactics since he was young. He sees football situations so clearly that he was always the one to decide how the game would be played.”

As much as you can be born into a club, Cruyff and Ajax were forever destined to be as one. Born five minutes from the stadium, the young Cruyff played on streets near the ground. After the death of father, his mother began working as a cleaner at the club, and his eventual stepfather worked as an assistant groundsman. Johan joined the club as a ten-year-old, and made his debut aged 17.

In isolation, Cruyff and Ajax coach Rinus Michels would have achieved greatness; together they achieved miracles. In eight seasons as a mainstay in Ajax’s first team, Cruyff won six Eredivisie titles, four KNVB Cups and three consecutive European Cups. He scored 250 goals before following Michels to Barcelona for a world-record fee. After winning three consecutive Ballon D’Ors, Cruyff promptly helped to end their 14-year wait for a league title.

The only thing that eluded Cruyff was the 1974 World Cup, a loss to West Germany that scarred a nation. The player himself has a typically philosophical take on the defeat: “We showed the world you could enjoy being a footballer; you could laugh and have a fantastic time. I represent the era which proved that attractive football was enjoyable and successful, and good fun to play too.” Nobody remembers the losers? Pah.

Cruyff certainly had the technical ability to give credence to Van Basten’s assessment. He made football look easier than any European before him, the difference-maker in three of the most attractive teams in the game’s history – Ajax 66-73, Barcelona 74-76 and Netherlands 1974. The combination of speed, touch, poise and vision was almost impossible to defend against, and even harder to dislike. If Pele ruled the 1960s and Diego Maradona the 1980s, the decade in between belonged to Cruyff.

Yet technical ability was only ever part of the story with someone who placed far greater importance on a footballer’s brain than his body. Cruyff was obsessed by immeasurables such as timing and vision, rejecting the use of statistics in sport: “My qualities are not detectable by a computer.”

Most importantly, Cruyff believed in simplicity: “Simple play is also the most beautiful. How often do you see a pass of forty meters when twenty meters is enough?” he once said. “To play well, you need good players, but a good player almost always has the problem of a lack of efficiency. He always wants to do things prettier than strictly necessary.”

Cruyff’s simplicity is often misrepresented. He did not mean that players should only choose the easiest option, but that the choice should be made to attain the best expected result.

Take his own Cruyff turn, for example. This feint was neither carried out to embarrass Sweden’s Jan Olsson nor to excite the watching crowd, but because Cruyff estimated that it was the simplest method (in terms of effort and risk vs expected result) to beat his opponent.

It is no surprise that Cruyff welcomes the comparison with his own preferred style of football and choreography. When in 2008 the English National Ballet announced a new work which interpreted 10 great footballing moments through the medium of dance, his turn against Sweden was the stand-out choice.

If Cruyff’s belief in simplicity became a theme during his playing career, it came to define him as a coach. His vision of football, an evolution of Rinus Michels’ own totaalvoetbal, was based on a simple concept: Keep the ball when you have it, get the ball back as soon as possible when you don’t.

Taking Michels’ own style, Cruyff super-charged it. The football world soon realised that Cruyff hadn’t just been playing the game, but absorbing it. His understanding of the game’s minutiae was (and still is) unsurpassed. The scholar was ready to show off exactly what he’d learned.

There is now an ideological battle between aesthetics and pragmatism in football. Does winning matter most, or does entertainment matter more? The holy grail makes the question and argument redundant, by harmonising both ideals.

“With him, as well as with me, results may have come first, but quality of soccer was No 1.” Cruyff said of his mentor Michels upon his death in 2005. “Just winning is not enough.” Both coaches found the perfect blend of football romance and pragmatism. If you can’t win, then entertain. If you can’t entertain, then at least win.

Part of Cruyff’s coaching success came through sheer imagination. Football was a game of endless possibilities, limited only by the restrictions coaches placed on their own teams. Starting at Ajax, he changed their formation to 3-4-3 in order to add support to the attack, and preached the idea of possession as king.

“It’s a basic concept: when you dominate the ball, you move well,” Cruyff said. “You have what the opposition don’t, and therefore they can’t score. The person that moves decides where the ball goes, and if you move well, you can change opponents’ pressure into your advantage. The ball goes where you want it.”

At Barcelona, Cruyff perfected this art. He won four league titles and the European Cup in 1992. He also inspired the tiki-taka style that has become entwined with the club’s most successful era. Whereas Michels’ totaalvoetbal relied on players interchanging positions, Cruyff’s strand made the ball do the work.

“As a player he turned football into an art form,” says former Barcelona president Joan Laporta. “Johan came along and revolutionised everything. The modern-day Barca started with him, he is the expression of our identity, he brought us a style of football we love.”

It is no coincidence that Cruyff’s two natural homes – Ajax and Barcelona – have the most iconic youth academies in world football, and his longest-lasting legacy at the Camp Nou came away from the first team. He was an advocate of football as education. Total Football was not a style of play learned in first-team training sessions, but a way of life.

The logic is clear: If young players are already accustomed to the style and demands of the first team’s tactics, they have a greater chance of making the grade. It may seem foolish now, but Barcelona were filtering out hopefuls according to physical attributes rather than technical ability. Something had to give, and Cruyff’s request for a new academy system was accepted by president Josep Lluis Nunez. La Masia was born.

“Johan Cruyff built the cathedral, our job is to maintain and renovate it,” said Pep Guardiola when taking over at Barcelona. The La Masia graduate became head coach in 2008. By 2010, all three Ballon D’Or finalists (Andres Iniesta, Xavi and Lionel Messi) had come through the system.

The hyperbolic tendency is to state that Cruyff invented modern football, but that is not true. There is no one forefather of any of football’s great movements. Michels took his influences from Hungary and Brazil, Cruyff took his from Michels, Guardiola in turn from Cruyff. Yet the effect Cruyff had, and the legacy he left at Ajax and Barcelona, makes him the game’s most influential individual of the last 40 years. His methods led the European football Renaissance.

“In a way I’m probably immortal,” Johan Cruyff once said, never one for false modesty. As his open-heart surgery and continued fight against cancer indicates, mortality is inescapable. Yet that only makes our legacy more important. In purely football terms, Cruyff will never die. No ‘probably’ required.