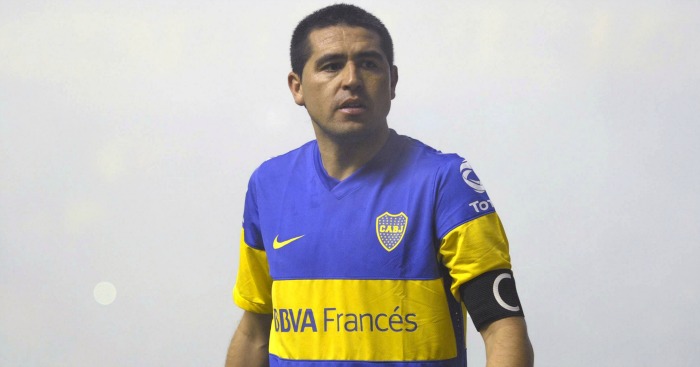 “If we have to travel from point A to point B, everyone would take the six-lane highway and get there as quickly as possible. Everyone, except Riquelme. He would would choose the winding mountain road, that takes six hours, but that fills your eyes with scenes of beautiful landscapes” – Jorge Valdano.

When Juan Roman Riquelme retired in January 2015, there was an outpouring of grief across the footballing world. Not just in Buenos Aires, where Riquelme had made himself a sporting icon. Not just in Argentina, for whose national team Riquelme had played over 50 times, starring in the 2006 World Cup. Not just in South America, where he had been named Player of the Year and won three Copa Libertadores.

No, this was an altogether different kind of mourning. Some felt that not only had a player retired, but an entire species had been rendered extinct. The last petal of a beautiful flower had fallen to the floor.

Yet for every supporter shedding a tear, there was someone stood just behind them telling them sharply to dry their eyes, mate. In the age of black and white views, with grey increasingly shunned, few players divide opinion quite like Riquelme. Critics become accusers; fans become disciples. The line between bona fide idol and bone idle is wafer thin, and there is no space to sit on the fence.

To his followers, Riquelme is a representation of a footballing ideal, the personification of an artform. Horacio Pagani described him as “the second inventor of football”, but the Argentinian was actually a throwback to a time when football was played as amateur pastime, enjoyment prioritised over success.

“I can only call myself a footballer on Monday to Saturday,” as Riquelme once said. “Because on Sundays I can’t really call it work, I enjoy playing the matches so much.” “I am a simple person,” he later said when returning to Boca Juniors. “All I want is to play football every Sunday.” All Boca supporters wanted to do was watch him play.

The natural talent was never in doubt. With long legs that gave him a slightly ungainly look when running without the ball, Riquelme became a magician when it arrived at his feet. His passing and free-kick execution were virtually unrivalled when in his pomp, while his physical strength and speed of foot made tackling him a victory in itself.

The most eye-catching aspect to Riquelme’s game was just how many touches of the ball he had. At Villarreal, Marcos Senna spoke of the “just give him the ball as much as possible” strategy, while for Argentina Jose Pekerman did precisely the same during the 2006 World Cup. If that meant that the opposition could reasonably allocate two or three players to stopping the supply from Riquelme’s boots, it frequently proved a fruitless tactic.

Despite regularly being doubly or triply man-marked, Riquelme played at a noticeably slow pace yet dictated the entire speed of the game. He was like the perfect quarterback, jogging gently with the ball behind the madness of the scrimmage while waiting to make his move. Seconds could go by with the ball at Riquelme’s feet, but the resultant pass meant that time was always spent, never wasted. He was a pipe and slippers footballer in the yellow boots age, the strolling playmaker.

Watching Riquelme shield the ball, dragging it this way and that with his studs rather than instep or laces, was a phenomenal spectacle. So often a defender would pay the price for concentrating on Riquelme’s movements, rather than the movement of the ball. Only the very best dribblers can make body and ball move independently while remaining in control of both. Only the most talented make the complicated look embarrassingly easy.

Like every great showman, Riquelme’s greatest talent lay not in the application, but the timing. The perfect pass is achieved partly through its weight and accuracy, but also in being timed to complement the receiver’s run and the opposition’s positioning. It’s also about knowing not just when to touch the ball and when to shimmy, but when not to. Or, as Jonathan Wilson quotes Ezequiel Fernandez Moores in Inverting the Pyramid: ‘There is no music, but the pause helps to make the music.’ The best can combine all these elements with hardwired flawlessness, as if no effort was required in this pursuit of excellence. There is plenty of evidence to suggest that Riquelme preferred creating a goal to scoring one.

If the compliments come easy, the slurs are just as obvious. “I never believed in tactics,” Riquelme once said. “Football is very simple. If you play well, if you play better than your opposition, then you have more chances of winning.”

All very poetic, but also indicative of a player who was only effective when indulged. Riquelme’s style demanded that he be centre of attention, inevitably hampering his potential to succeed at Europe’s elite clubs. Sadly or otherwise, the days of building around a one-man team are over.

One man who certainly didn’t countenance Riquelme’s foibles was Louis van Gaal, surely the least compatible coach imaginable for the Argentinean’s unique style. Describing Riquelme’s arrival at Barcelona as a “political move”, Van Gaal famously gave his new signing a Blaugrauna shirt for his new baby. “He’ll probably get to wear it more than you wear yours,” was the joke, only half a tongue inserted in cheek.

It was Van Gaal who also offered the most cutting response to the Riquelme fandom, on the subject of his playmaker’s refusal to muck in. “You’re the best player when you have the ball, but when you don’t we play with one less,” the manager told him. “Why should I run when the ball can do it?” was Riquelme’s own take; the relationship did not last long.

If that stinging criticism contains some truth, Riquelme did plenty enough at Villarreal and Boca to justify being carried. He was the leader of the Boca team that won five domestic league titles, three Libertadores trophies and the Intercontinental cup, and his brilliance took Villarreal to the brink of the Champions League final in 2006. He may have been a luxury player, but Riquelme flourished when entrusted with responsibility for the team’s attacking play. Create the right conditions, and Riquelme would repay the patience and the faith ten times over.

There is also no doubt that Riquelme’s prickly character required a very special type of micro-management, one that at Boca Juniors basically involved taking his side in every argument. The list of clubs and managers that Riquelme fell out with was trounced only by the list of players. He left Boca Juniors (twice), Barcelona and Villarreal under clouds, usually while accusing managers or management of disrespect. He then turned Diego Maradona into a footballing Macbeth, refusing to even utter his name after walking away from the national team.

Yet the biggest criticism of Riquelme is born out of compliment, the suggestion that he should have done more with his talent. Where are the World Cups, the Copa Americas, the European Cups and the Ballon D’Or trinkets that his prodigious talent justified?

Of course that’s a valid point, and almost no career ends without disappointment and regret. But you can’t help feeling that those critics are slightly missing the point. Rather than attack Riquelme for his inconsistencies, why not love him because – and not in spite – of them. He has only ever fallen short of your standards, never his own. As the man himself said: “The ball has given me everything. Just like little girls love dolls, the best toy I’ve ever had, or could ever have, is a football.”

The most alluring footballers, those on our team who we truly fall in love with, are those who possess the talent, but don’t always leave it on show. Lionel Messi and Cristiano Ronaldo are worshipped (in a very modern way), but their magnificence is predictable. True joy is saved for the moments in which that spark of greatness finally catches fire and leaves you silent, amazed and enthralled. “Mystery creates wonder and wonder is the basis of man’s desire to understand,” as Neil Armstrong once said. He was almost certainly talking about Riquelme.

Reminder: This portrait of an icon series will be released as a book early next year. Proceeds to go to the brilliant Sir Bobby Robson Foundation. If you have enjoyed this or any other in the series then you have to buy it, because it’s for charity.