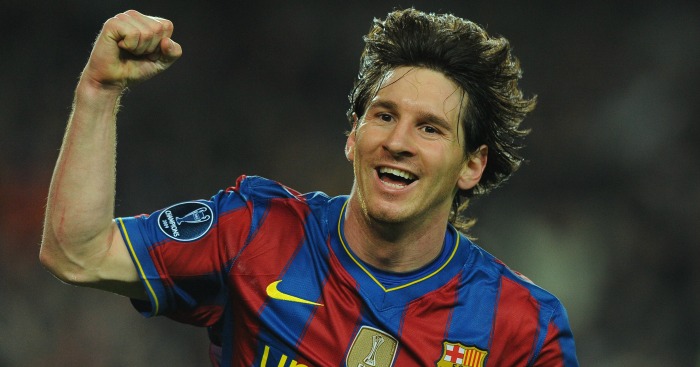 It was in October 2003 that Barcelona’s first team got their first glimpse of what Lionel Messi could do. The 16-year-old had been scoring goals for fun in the club’s Juveniles B team and had been promoted to the Juveniles A squad, but the international break had left coach Frank Rijkaard low on numbers. He decided to invite some of the academy players to a session at the Mini Estadi training ground.

“He destroyed us all in a training session,” former France international Ludovic Giuly recalled. “They were kicking him all over the place to avoid being ridiculed by this kid, but he didn’t say anything. He just got up and kept on playing. It was incredible. He would dribble past four players and score a goal. Even the team’s starting centre-backs were nervous. He was an alien. He killed us all.”

In his biography of Messi, Guillem Balague revealed that Ronaldinho, the star of that Barcelona team, told his teammates that very day that the youngster would be better than him. The only change since that training session is that most defenders no longer get close enough to Messi to kick him.

To watch Messi play for the first time is a deeply surreal experience. Luis Figo described it as “like having an orgasm”, but the reality lasts longer than a momentary rush of pleasure. So obvious is the Argentinian’s greatness, even among world-class teammates, that there is a collective fervour when he receives the ball, or looks likely to do so. It is an involuntary reaction.

Even watching him as a neutral, you find yourself supporting Messi, and him alone. You are begging him to do something magical, to create your own ‘I was there’ Messi moment. Even when you are trying to work, you forget to watch the other players, hardly even making mental notes.

“Don’t write about him, don’t try to describe him. Just watch him,” Pep Guardiola once advised. Messi’s brilliance is so blinding that he is a form of hypnosis. Often, you could end up writing the same two, non-descriptive words: ‘Him again.’ Everyone will know what you mean anyway.

This hypnotism is not just something that affects spectators, but Messi’s teammates too. “What Leo does is so incredible that I had to be careful not to stand still watching him make his moves,” Thierry Henry said of his time at Barcelona. Thiago Alcantara went further still: “We give him the ball and stand back and watch. People often say to me they saw Pele and Maradona play. In the future, I will be able to say I saw Messi play.” A Spain international with seven league titles in two countries, reduced to an excitable fanboy in search of an autograph. If Messi’s brilliance makes you feel inadequate, imagine what it does to those tasked with playing the same sport.

Messi’s greatest achievement is changing the boundaries of what we consider possible, and therefore changing our estimation of normal. Before him, we believed that the top scorer in a team was likely to be the No. 9, a central striker serviced by midfielders. Messi started as a right-sided forward, returning to that position under Luis Enrique after being previously utilised as a false nine.

Before Messi, our expectation was that 20 league goals constituted an impressive goalscoring season, and 30 goals a great one. He has scored more than 40 goals in a league season on three occasions, and in 2011/12 scored 82 goals in all competitions for Barcelona. In March of that season, Messi became the club’s all-time top scorer in official competitions, less than seven years after his first start.

Before Messi, our expectation of a highly successful individual player was to win a Ballon d’Or. He has won five, and could still extend that lead of two. “Messi will be the player to win the most Ballons d’Or in history,” said Johan Cruyff in 2012 (when Messi had won three). “He will win five, six, seven. He is incomparable. He’s in a different league.”

Before Messi, we presumed that a goalscorer of such magnitude must be selfish, or at least be predominantly focused on scoring goals. Yet he is emphatically unselfish, a hard-working team player who bought into Guardiola’s demands as much as any teammate. Messi is the top assist provider in La Liga’s last 25 years (since such statistics have been officially recorded), and the leading provider in both of the last two seasons. By the age of 27, he had the highest totals of both goals and assists in La Liga history.

Messi’s brilliance also raises the bar for acceptable criticism. Regularly denounced for his performances for Argentina (at least in comparison with his Barcelona form), he has captained his country to three successive major tournament finals and won the Golden Ball for the best player at the 2014 World Cup. Now 29, Messi is Argentina’s top goalscorer, and ranks fourth in a list of all-time appearance-makers.

The inherent risk in normalising brilliance is that it persuades us to take that brilliance for granted. Each one of Messi’s records merits repeated shouting from every rooftop in Barcelona and Buenos Aires, yet we take them in our stride. Every brace against weaker opposition is treated with surprise that it was not followed by a hat-trick, every goalless game prompting baffled questions. In a sport that exists in a constant state of flux, in which the search never stops for bigger and better, we must remember to stop and stare at the beautiful sunset.

The true global appeal of Messi’s genius lies in his normality. Some of our heroes expect to be worshipped as gods, their images creating an aura of untouchability. Messi is the counterbalance, the anti-hero. His skills may be other-worldly but his image is decidedly, well, normal.

The argument as to whether Messi or Cristiano Ronaldo is the greater player is interminable precisely because it is a question based on opinion with no right answer, but it isn’t difficult to see why the two have been pitched as opposite factions, two warring behemoths. One is the bronzed Adonis, a tall, towering physical specimen. The other is a 5ft 6in, slightly awkward man whose hormonal problems in early life led doctors to advise that he would grow no taller than 4ft 7in.

If Messi’s diminutive stature makes him more relatable, there is no doubt that it also played a huge part in his success. It gives him a low centre of gravity and thus greater balance to ride challenges, and also aids his dribbling. Messi’s short legs – and therefore shorter steps – enable him to change direction quicker than taller, more languid opponents. Messi is the inside-out superhero, whose weakness became his greatest strength.

“The ball stays glued to his foot; I’ve seen great players in my career, but I’ve never seen anyone with Messi’s ball control,” says Diego Maradona. Only Garrincha could lay claim to be a greater dribbler in the history of the game.

“Messi is the best player in the world by some distance. He’s like a PlayStation. He can take advantage of every mistake we make,” says Arsene Wenger, citing a familiar computer game analogy. It is the speed of Messi’s thought when in full flight that is so unusual, coupled with an incredible level of ball control. Guardiola calls him the only player who can run faster with the ball than without it.

Messi’s supercharged speed makes him infinitely ‘shareable’, the perfect face of a six-second culture in which attention spans barely last any longer. Take his goal against Bayern Munich in the Champions League semi-final of 2015, in which Jerome Boateng was sent to the floor, Manuel Neuer fooled by a signature dink over the goalkeeper and Philipp Lahm was unable to clear the ball from the line. Messi achieved all of this in the space of three seconds. There are three words which follow his name more than any other: The internet reacts. And for good reason.

Crucially, Messi does not revel in his superstardom. His recent tax case has scraped a layer off his polished reputation, but there is no vacuity to his celebrity status. Advertising campaigns focus not on image or style, but on football. Messi is married with two children to a girl he met at the age of five in Rosario, the cousin of his childhood best friend. The clash of his normality – there’s that word again – with his divine ability only increases his popularity. As Javier Mascherano so perfectly phrased it: “Although he may not be human, it’s good that Messi still thinks he is.”

It is easy to resort to hyperbole when discussing the game’s greatest players, yet in this case we run out of superlatives. No compliment is too strong, no declaration or distinction too melodramatic. Just as Messi plays on a higher plane, we need to find language to match. I’m reluctant to compare, because that is often to cheapen, but, even at the age of 29, we can wonder whether he is the greatest of all time. His great mentor Guardiola is left in no doubt: “I feel sorry for those who want to compete for Messi’s throne. It’s impossible, this kid is unique.”

“Before a game, you can plan for everything,” Fabio Capello said in 2015. “But Messi can produce a move that no-one expects and change the game in an instant.” He is absolutely right. On both a micro and macro level, Lionel Messi is a game-changer. We may never see his like again.

Daniel Storey – Portrait of an Icon will be released as a book in spring 2017. Proceeds will go to the Sir Bobby Robson Foundation