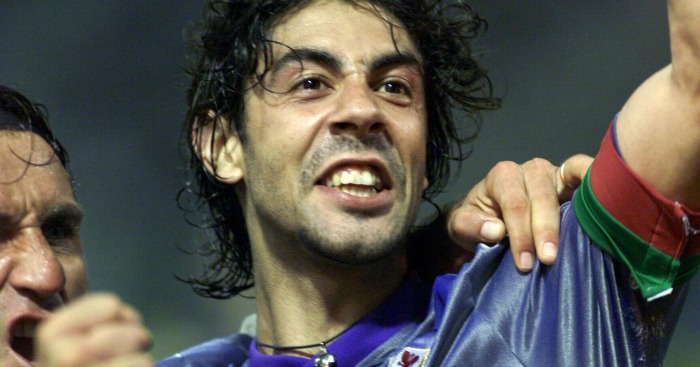 If you were to describe the aesthetic stereotypes of a luxury footballer, Manuel Rui Costa would tick every box. Long hair, tanned skin, socks rolled down past the shinpads, the Portuguese looks like the type of player you’d want on your bedroom wall. He is a rock ‘n’ roller.

Another hallmark is a penchant for smoking. While English players are now lambasted for being caught with cigarette in hand, the habit is still treated with reverence from cultured foreign players. Think Zinedine Zidane, Dimitar Berbatov and Roberto Carlos. “Today I can tell you: I always smoked,” said Rui Costa after retiring. “I never said I did, especially not to give a bad example to the young lads and future players. I know that it is not good for an athlete.”

It is a fitting anecdote for Rui Costa, for it epitomises the dichotomous aspects of his persona. While the Portuguese has the veneer of a maverick, it is a weak facade. Rui Costa was more loyal and committed to his audience than almost any other player of his generation. It was as if he was duty-bound to make the most of his remarkable talent – the talent to entertain. Mavericks don’t consider the impact on a future generation of footballers when puffing on a cigarette; Rui Costa did.

For any other player, Rui Costa’s career would be a tale of just not quite, the story of a man forced into playing second fiddle. As a No. 10 in Serie A, Rui Costa was often overshadowed by Zidane and Roberto Baggio. He moved to Milan, where the emergence of Kaka eventually outshone an ageing midfielder. At international level, Luis Figo was given much more praise, while the rise of Cristiano Ronaldo threatens to be a blanket over memories of Rui Costa. He was part of the Portuguese ‘golden generation’ that never finished better than second.

Fate certainly transpired against him in 1994. Having seen a number of Benfica players leave to join Lisbon rivals Sporting, President Jorge Brito told Rui Costa that if he joined a foreign club, the player and not the club could decide which offer to accept. When Barcelona approached Benfica before the 1994/95 season, the decision was easy; Rui Costa even had his official photo in a Barcelona kit. Unfortunately, Manuel Damasio then replaced Brito as President, reneged on the club’s promise and cancelled the deal.

Had he gone to Barcelona and played under Johan Cruyff, it is easy to wonder whether Rui Costa would have won Ballon D’Or awards and the fame his magnificence deserved. The rules restricting foreigners mean his success was not guaranteed, but it remains one of football’s great ‘what ifs’. Two league titles, four domestic cups, a Champions League trophy, the respect of every supporter he played for and the adoration of the Portuguese public may be sufficient compensation.

Many flair players are hugely divisive; Rui Costa is adored by almost everyone. Spotted by the great Eusebio aged just five years old, he came closer than most to eclipsing the Black Panther’s legacy. Before A Seleccao became defined by Cristiano Ronaldo, Rui Costa and Luis Figo were their poster boys.

Leaving Portugal at the age of 22, Rui Costa’s seven years in Florence helped to create one of the iconic teams of the 1990s. In a league still convinced by the mantra of success through defence, Fiorentina were the eye-catching antidote. They may not have lifted a Scudetto, but the sides of Claudio Ranieri, Alberto Malesani and Giovanni Trapattoni earned plenty of young followers in England, including one wide-eyed little boy in Nottingham. Nintendo, Fila, Football Italia, Gabriel Batistuta and Rui Costa – Fiorentina were like a tribute to the greatest hits of the 90s.

Very different from Zidane at Juventus, Rui Costa’s nearest likeness in No. 10 terms was the vision and technique of Michel Platini at the same club. It was no accident. “It was the way he played, the intelligence with which he positioned himself on the field,” Rui Costa said of his idol. “The way he dictated play, and let us not forget those mazy dribbles and cool decision-making.”

“Rui is a master in the art of conducting the ball, covering it expertly,” says Carlos Quieroz, Rui Costa’s coach at Portugal U20 level. “He is a playmaker who can decide a game, marking its rhythm with the ball at his feet and his eyes on the game.”

In Florence, Rui Costa earned the moniker ‘il Maestro di Fiorenz’”, a superbly appropriate nickname. The word ‘maestro’ has become synonymous with a more general excellence, but the word’s most common usage is in reference to musical conductors. This is Rui Costa in excelsis, comfortable not just roaming around the final third but also dropping deep to start attacking moves.

When Batistuta left Florence, Rui Costa was the natural choice to replace him as club captain and Viola icon. He only left the club when they were on the verge of bankruptcy, seven years after moving to Italy. The £28million fee Milan paid for him not only saved Fiorentina, it was also the Rossoneri’s club record transfer. The midfielder struggled with injuries during his final seasons in Milan, but in 2002 one Italian commentator declared that he was playing three times as well as Zidane. You’d take that.

It’s an unofficial award, but Rui Costa might just be the player in my lifetime with the highest average quality of goal. ‘Beware the Youtube highlights video’ is advice for the modern age, but I urge you to give this one 11 minutes of your time. It contains every goal Rui Costa scored in Serie A, starting with a rocket against Padova. Almost every one contains at least one piece of pure majesty, and over half are frankly stunning. For most other players, this would be a ‘best of’ collection. For Rui Costa, it’s the entire back catalogue.

The one I remember most fondly was actually the Portuguese’s last before leaving for Benfica, although I didn’t know that when starting this piece. He breaks forward with a burst of pace, before slowing the game down to his favoured speed, like a jazz musician with the audience in the palm of his hand. A shimmy takes him past a defender before the curling shot finds the top corner. Simply outrageous.

Yet goals were always a glorious bonus for Rui Costa. Or, as he himself said, “it’s creating goals that fulfils me, more than scoring them”. Watching him create them had the same effect. The partnership with Batigol in particular, supreme creator in perfect harmony with lethal finisher, was a thing of footballing wonder.

Watching Rui Costa’s passes back now, the most striking thing is how so many of them were through balls played straight through a defence. His forte was not playing a 40-yard curled cross or no-look pass, but one played with perfect weight and pinpoint accuracy. As a striker, there is nothing better. This causes an optical illusion, whereby what Rui Costa was doing looks simple; think again.

At the risk of over-analysis, there is another trick which makes Rui Costa’s assists possible to play and almost impossible to defend. He regularly effected the killer pass half a second before you would typically expect it to be played, often passing and continuing to move forward in the same stride. It’s a marginal thing, but catches defenders off guard. Again, Rui Costa would do it all with an insouciance that made it look simple.

Rui Costa’s greatest trick was to be a master of disguise. At the highest level, all footballers possess the skills to embarrass an opponent; the trick is to surprise. Some telegraph their next move, but Rui Costa was impossible to read. Every dip of the body and movement of the foot away from the ball was done with a purpose, gaining him extra time to plan his next move. It made him one of the most elegant footballers of the last two decades.

There’s no question that Rui Costa’s career was not built on consistency. He was a moments player, capable of all or nothing and very little in between. Yet when he was on his game, there were few throughout football’s history who would match him. Whole matches could pass him by, but they could also turn on one wave of his wand. Rui Costa was like a footballing Christmas; it might not happen as often as you’d like, but the enjoyment made the wait wholly worthwhile. Well I wish I could be Rui Costa every day.

There are another two anecdotes that emphasise Rui Costa’s reputation not as a wonderful player, but man of the people. With Fiorentina’s players celebrating after winning the Coppa Italia in 2001, one Viola supporter scaled the fence and jumped on Rui Costa’s back to celebrate. When the fan was dragged off by riot police and taken away to be (presumably) beaten, Rui Costa went over to the police, negotiated the fan’s release and took him back to the safety of the stands.

The second anecdote came five years later, in Milan. With Rui Costa suffering regular injuries, he tore up his lucrative contract at the San Siro a year early in order to take a deal at first club Benfica on far less money, rejecting offers of a final payday in the sun at Chelsea. If the Milanese appreciated the gesture, their love of Rui Costa was confirmed with his parting words: “Once Milan flows through your veins, it will flow forever in your blood.”

Retiring at Benfica in a full Estadio da Luz is all Rui Costa ever wanted. “I started, in front of my home fans, and that for me was the most important thing,” he said. “Often the hardest thing is to know when to stop. Between the desire to carry on playing and the tendency to focus on what you still have to offer on the field of play, we footballers can often keep going too long.”

Rui Costa was a link between two generations, the flair and skill of a modern, ‘computer game’ player but with the swagger of a 1970s idol. Crucially, he was never motivated by fame or monetary reward, but played as if his main responsibilities were to the game itself and the fans who watched him. He had an obligation not to always be the best he could be, but offer the most entertainment and enjoyment. It’s an incredibly alluring combination.

“The strong bond between me and the fans of the three clubs I played for is something to be thankful for every day,” said Rui Costa after his retirement. “Even now the depth of feeling still takes me by surprise.” He should realise that only very special players and people receive such widespread adulation at every stop along the road.

portrait of an icon Rui Costa