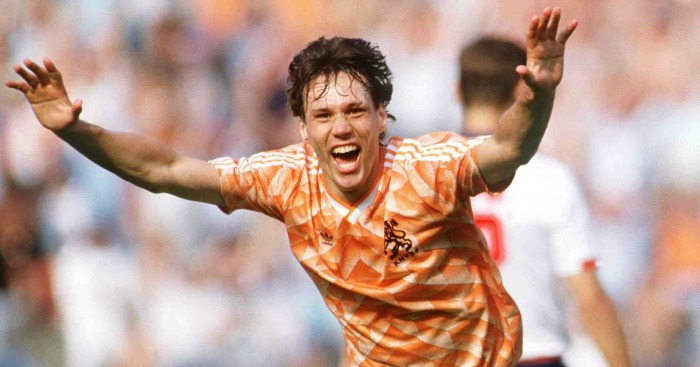 Despite being a widely used term in football, the whole concept of being ‘underrated’ is actually pretty weird. Firstly it relies upon an individual’s notion of the opinion of the whole, which is almost impossible to nail without bias. Then there is the problem that as soon as a player is widely regarded as underrated, he automatically becomes overrated or at least, well, rated.

So rather than label Marco van Basten as ‘underrated’, I’ll settle for overlooked. In two notable lists of the greatest strikers to play the game, Van Basten was picked at 9 and 11. When the Daily Telegraph’s writers each discussed the best players they’d seen play, Van Basten never even merited mention. For once, Diego Maradona is a voice of reason. “It is between Romário and Van Basten,” he said, when asked about the greatest players he’d seen live.

Van Basten scored 277 goals in 373 club games. He became only the third player – after Johan Cruyff and Michel Platini – to win three Ballon D’Ors, and was also named World Player of the Year. He won six domestic Golden Boots and was the top scorer and best player at Euro ’88. He won seven titles, seven other domestic trophies and seven European trophies, including two European Cups. Not bad for someone who played his last match at the age of 28, legs ruined by injury.

He was also the greatest striker of his generation, and arguably the most complete forward in the history of the game. Left foot, right foot and headers from inside and outside the area. Powerful volleys and meticulously-placed finishes. Instep, outside of the boot and toe pokes. Comfortable leading the line and also dropping deep to dictate play. When Rinus Michels dreamt of the perfect striker for his image of Total Football, he dreamt of Van Basten.

At 6’2″, Van Basten looked slightly ungainly. The length and paleness of his legs combined with the short shorts of the 1980s gave him the pre-match look of a baby giraffe, but never have looks been more deceiving. Van Basten blended his height with a grace that made him look like a cheat player on a computer game. His combination of explosive power and flexibility is almost unique.

“My first dream as a young boy was to be a gymnast,” Van Basten said in 2002. “I found out that I could play football pretty well. I think my gymnastic background helped a great deal with my agility when I took up football seriously.” That’s an incredible understatement.

The array of different goals is frankly ridiculous, each one demanding to be watched on repeat. From dancing runs to glancing headers, powerful shots to delightfully dinked finishes. And don’t forget overhead kicks. Those are all taken only from his five seasons at Ajax.

Yet there is only one goal on which it is right to dwell. It is incredibly unusual for an elite player to have their career defined by one moment. Gordon Banks, Antonin Panenka, Geoff Hurst and Johan Cruyff are four, but these are the few exceptions to the rule. Above all those stands Van Basten, in Munich’s Olympiastadion, against USSR, on June 25, 1988.

Van Basten didn’t just volley the Dutch into a 2-0 lead, he pushed back the boundaries of what we could expect from a volley. This was the volley by which all others would be compared, judged and ultimately fall short. Football is a sport of the infinite, with limitless possibilities. Yet in 1988, in the European Championship final, Van Basten effectively completed an aspect of the game.

The first thing to notice is just how hopeful Arnold Muhren’s cross is. The pace and loop on the ball made even attempting a shot a folly for most. The sensible thing to do would be to bring down the ball and either try to win a corner, cross the ball to Ruud Gullit or shimmy inside and shoot with his left foot. Part of the goal’s greatness lies in the impudence of the attempt. The rest lies in its execution.

If you pause the video at the right moment, notice how far away from Van Basten the ball is when he makes contact. Not only is his head not over the ball, but he is actually starting to rise off the ground. Fast-forward half a second and, before the ball has even beaten Rinat Dasayev, Van Basten is three feet in the air. To both control the pace of the volley and the accuracy of the shot might be the greatest single moment demonstration of technique in the history of the sport.

“Sometimes these things just happen,” was the striker’s typically humble reaction. Not to the rest of us, they don’t. The perfect talent had met the perfect stage and produced the perfect moment.

Van Basten actually started Euro ‘88 on the Netherlands bench, with Jacobus Bosman preferred. He had suffered a serious ankle injury during his first year in Milan after an £875,000 move, and had managed just 11 Serie A appearances. Three weeks later, he was hailed as the best striker in the world. He would score 117 goals in his next five seasons.

When examining Van Basten’s record in Italy, it’s important to remember that Serie A was dominated by effective defences. In 1991/92, for example, nine of the 18 teams conceded one goal a game or less. Van Basten managed 25 by himself, seven ahead of Roberto Baggio and 12 more than Gabriel Batistuta. In 1989/90, it was Baggio, Diego Maradona, Rudi Völler and Jurgen Klinsmann who trailed Van Basten in the Capocannoniere. He became canonised as San Marco by the Milanisti, the image of him in the shirt of the Rossoneri with arms held aloft etched onto the memories of a generation.

It’s impossible not to wonder how highly Van Basten would be rated without the crippling effects of his ankle and knee injuries. He finally retired in August 1995, but scored his final Milan goal against Ancona in May 1993 and played his final game in the Champions League final later that month. On talent alone, he has few peers: Pele, Maradona, Cruyff, Best, Garrincha, Messi, Van Basten.

While injuries regularly ruin potential stars and curtail the final hurrahs of glittering careers, it is extremely rare for an elite player to be stopped abruptly in his prime. To put it in perspective, the timing of Van Basten’s demise was equivalent to Messi playing his last game in January this year and Cristiano Ronaldo in August 2013. Zinedine Zidane’s would have come 18 months before his memorable Champions League final volley and three years before his last Ballon D’Or. Alan Shearer would have managed less than three years as a Newcastle player, Dennis Bergkamp less than three at Arsenal.

“My life was dominated by pain for the final three years,” Van Basten recalls, and blames the treatment from doctors in the late 1980s for his problems. “From a player who always loved to attack and to score goals, I don’t see myself as a victim. I see myself as an example of how a wonderful career can also come to an end. The most frustrating thing for me is not the way I hurt my ankle, but the way I have been treated by some doctors because the person who damaged my ankle most was not a player, but a surgeon.”

Yet it would be a mistake to focus on what Van Basten could have been when what he was so magnificent. “Marco was the greatest forward I ever coached,” said Fabio Capello. “His early retirement was a mortal misfortune for him, for football, and for Milan.” This is a man who managed Jean-Pierre Papin, Ruud Gullit, George Weah, Raul, Francesco Totti, Gabriel Batistuta, Zlatan Ibrahimovic, Alessandro del Piero, David Trezeguet and Ronaldo.

There is no doubt that Johan Cruyff is the true king of Dutch football, but Van Basten is the prince, next in line to that throne. Majesty is an appropriate word for them both.

‘Where will we find another like him?’ asked the headline in Gazzetta dello Sport the day after Van Basten retired. European football is still searching.