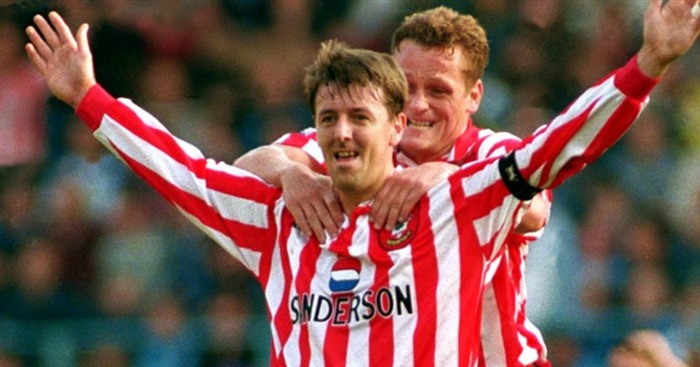 For Southampton supporters, May 19, 2001 provided that perfect moment. That sunny late-spring day marked Southampton’s last game at The Dell, 103 years of heritage ending with a home fixture against Arsenal. After 74 minutes, with the game level at 2-2, Matthew Le Tissier climbed off the bench. Fifteen minutes later, Le Tissier had scored a wonderful winner, and the last goal the old ground would ever see. Southampton’s greatest ever player had signed off an era in his own inimitable style. It was his 100th – and last – Premier League goal.

Le Tissier hung on for a while, but it was never the same. He played just 20 competitive minutes in Southampton’s new stadium, the identikit, modern St Mary’s, before retiring. His heart and soul would forever belong at The Dell, with the crowd so unfathomably close to the pitch that players could hear them gasp and swear.

Le Tissier is one of the five most technically gifted English players of the last 40 years, alongside Glenn Hoddle, Chris Waddle, John Barnes and Paul Gascoigne. His extraordinary skill was never utilised extravagantly or to taunt the opposition, but for the sole purpose of entertaining his adoring Dell disciples. That ground saw some of the most majestic goals in English football history. The average quality of a Le Tissier goal is the greatest in the Premier League era, Eric Cantona is his only genuine rival for the honour. Between 1992 and 1998, Le Tissier scored 113 times for Southampton. Not bad for an attacking midfielder.

With the appropriate nickname of ‘Le God’, Le Tissier was Southampton’s omniscient force. A succession of managers gave him a nominal free role in front of midfield but behind the striker, but the truth is that Le Tissier popped up wherever he pleased, dropping deep and drifting wide to pick up the ball. At his peak he controlled time, forcing 11 opposition players and ten teammates to play at exactly his own pace. It was largely an honour.

Most of all, Le Tissier was a showman. As the money rushed into the Premier League, so too did the demand for players you could depend on. Consistency became cherished over difference, and ‘luxury player’ was a term warped from glowing compliment to insult. Le Tissier was the last great English entertainer, our unflawed genius.

“You have to be willing to try something a little bit different and you don’t want to have the fear of failure,” Le Tissier says. “I think a lot of people tend not to try things because they think it will look foolish if it doesn’t come off, whereas I was a little bit the other way round. I didn’t have any great embarrassment if it didn’t come off.”

My favourite Le Tissier goal actually came before the Premier League era – thankfully still captured on video – the second of a hat-trick against Norwich City. The most mesmeric element is that Le Tissier has the ball at his feet for eight full seconds before scoring, despite barely even getting above walking pace. In a league where the opposition were prepared to do anything to get the ball off a flair player, it’s an astonishing skill. Even the finish seems to correct itself to find the bottom corner after leaving his boot. Magic.

If Le Tissier’s talent made him a superstar, his personality counteracted any affectations of stardom. His honest admissions of hating fitness training and the typical athlete’s diet would make modern sporting stars weep, and his strolls around the pitch unsurprisingly drew accusations of laziness. Le Tissier’s entire career was like a control experiment to see how far immense natural talent alone could take a footballer.

Rather than detract from Le Tissier’s image, this everyman element of his personality only improved it. Far from being lazy, Le Tissier understood his own attributes perfectly, his languid style complementing his skill set. A world where distance covered statistics are used to criticise the aesthetic wonder of Le Tissier is one you should enjoy no part in. He was like a character from a comic strip, a player spliced between Sunday league and World Cup final. These are the players who inspire the next generation.

The most prominent criticism aimed at Le Tissier is that he settled for Southampton, rejecting moves to Milan, Tottenham and Chelsea among others. There were questions too about his potential ability to acclimatise to such a move. Would he have been lost when a team was not built around him? Would his lack of fitness and stamina have been found out?

I find that criticism entirely misplaced. To denounce Le Tissier for not showing greater personal ambition is to judge him by your own expectations of human behaviour and career aspirations. Le Tissier didn’t want to leave Southampton, so why should he? If his failure to win titles and trinkets puts a black mark next to his grade, that’s somebody else’s problem, not his. Not everybody wants to play for the best club in the land. It’s not where we are but what we enjoy that determines happiness.

Le Tissier may never have played for an elite club, but it didn’t diminish his influence. In 2010, then-Barcelona midfielder Xavi discussed his childhood idols in an interview with The Sun.

“The man I absolutely loved watching as a kid was Matt Le Tissier,” Xavi said. “His talent was out of the norm. He could dribble past seven or eight players but without speed – he just walked past them. For me he was sensational. He was definitely an idol.”

One thing is certain: Le Tissier could have been paid far more handsomely elsewhere, particularly during his later career. His highest wage at Southampton was £3,500 a week, and he need the money from his testimonial and autobiography to stay on an even financial keel. Le Tissier is not a man for airs and graces; this is a man who touts his golf clubs as his greatest indulgence.

“We didn’t have a lot when I was growing up. Mum and Dad had four boys and we lived on a council estate in Guernsey,” said Le Tissier in 2012 on his attitude to money. “They always used to make sure we had a pair of football boots each and some clean clothes, and I grew up with a pretty relaxed attitude to money. I was taught that it was far more important in life to be happy than to be rich.” Amen to that.

The only person who truly knows if Le Tissier fulfilled his potential is Le Tissier himself, and he seems pretty pleased with his lot. “I played the game the way I wanted to play it, and had I gone on to a bigger club, I probably wouldn’t have been able to do that,” he said. “I knew I probably wouldn’t win any honours, but when you’re at a club that size, staying in the Premier League for 16 years gave me as much pleasure as winning a medal if I’d gone somewhere else.”

If there is to be any regret from Le Tissier’s career it is that he was criminally overlooked at international level. His eight England caps came over a three-year period, and included only 71 competitive minutes. Fans of feeling intensely miserable will be comforted to learn that Gabby Agbonlahor has played only five fewer minutes.

In truth, Le Tissier’s international absence is more shocking in hindsight than it was at the time. Terry Venables and Glenn Hoddle both had a multitude of attacking players to choose from (Robbie Fowler, Alan Shearer, Les Ferdinand, Andy Cole, Peter Beardsley, Ian Wright, Michael Owen and Teddy Sheringham), and those striking options reduced the requirement for a flair player in a free role. Le Tissier’s prominence at Southampton counted against him, for it failed to replicate the reality of international football. Gascoigne was ahead of Le Tissier in the creative midfielder queue. Hoddle took neither to World Cup ’98, and Le Tissier’s chance had passed.

Le Tissier was a genius caught between two eras. Had he been born 20 years earlier, he would surely have flourished for England, hailed as one of the pillars of the national team. Born 20 years later and he would have been the star of a million vines, his goals played on loop until they were etched into the minds of the computer game generation. He would also have been rich beyond his wildest dreams, yet you will never find a man happier with his lot.

The true beauty of Le Tissier lies in the timing and uniqueness of his career. Le Tissier’s supreme goals will never be lost to the ether, for the internet will see to that, but nor have they become stale through overexposure. To watch through the highlights of his career is to relive something (and someone) very special indeed. His loyalty to a comparatively provincial club is another hallmark of a bygone era.

The least Le Tissier’s majesty deserves is to avoid patronisation, and certainly criticism. He scored over 200 career goals, played for his country and almost single-handedly kept his only professional team in the top flight year after year. In doing so he earned the love and respect of a club, its fans and the city. I don’t know how you measure achievement, but that’s good enough for me. Most importantly, it was always good enough for him.