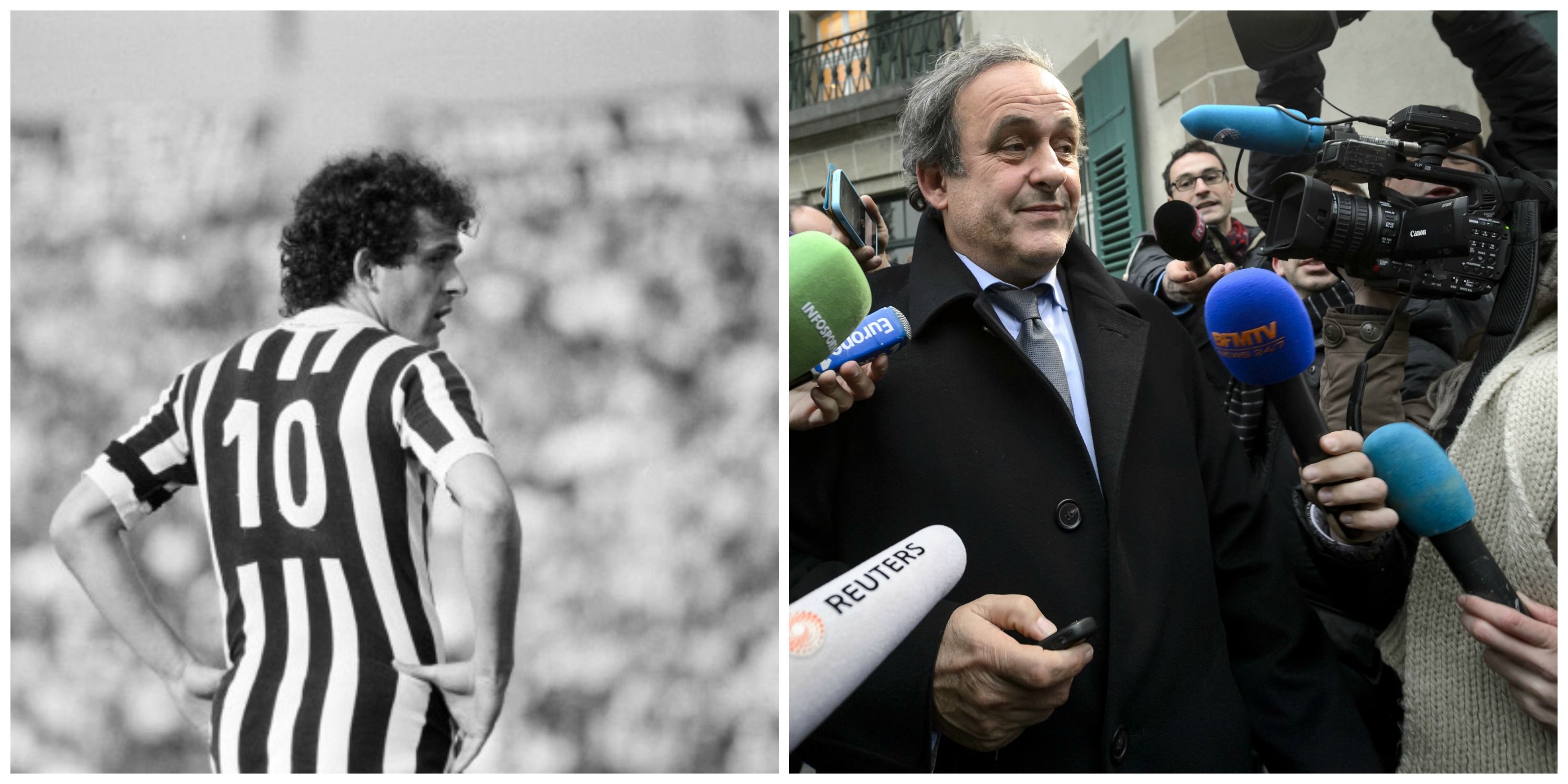 On June 27, 1984, as Michel Platini climbed the steps of the Parc des Princes, he came as close to footballing immortality as it is possible to conceive. The captain of France was about to lift the European Championship trophy in his own national stadium. He would be named as Ballon D’Or winner that year, just as he had the year before and would be the year after.

Platini had top scored in Euro ‘84 with nine goals. So dominant was France’s No. 10 that no country in the tournament outscored him. His two perfect hat-tricks (against Belgium and Yugoslavia) took France to the final, and his opening goal won Les Bleus their first major tournament. This was the best player in the world, the king of France.

Thirty-two years on from that night, a reputation has been destroyed. On December 21, Platini and Sepp Blatter were banned from all football activity for eight years. The king of France had not only been dethroned, but dragged through the mud. Platini and Blatter’s characters had become interwoven, two men tied together as they were pushed off the bridge and into the dark.

“Mr Platini failed to act with complete credibility and integrity,” FIFA’s ethics committee concluded. “He showed unawareness of the importance of his duties and concomitant obligations and responsibilities.”

Even talking about Platini’s greatness as a player now feels dirty. The concept of flawed geniuses is nothing new in football, but we associate them with fast cars, drink and sex. When the flaws in character involve taking illegal payments, a sourer taste is left in the mouth.

Platini’s actions raise an interesting question on sporting reputations. Some sporting greats demand our respect because of their personalities, but others gain widespread acclaim in spite of their behaviour.

It is impossible for me to celebrate George Best the footballer without reflecting on George Best the person, for example. Best once cut off his wife Alex’s hair and drew on her body with a marker pen, punching and kicking her after an argument on her 25th birthday. Wilful ignorance to those actions only facilitates the damaging myth that sporting excellence provides reason and excuse for abhorrent behaviour.

When those transgressions come post-playing career and are not of a violent nature, the line becomes still more blurred. Can we separate the sporting greatness of yesterday and the great flaws of Platini’s character that have since become apparent? The answer to that depends on your own personal judgement.

Platini was the European footballer of the 1980s, as Pele once remarked. Between 1983 and 1985 he won the Ballon D’Or three times and the World Player of the Year award twice. He lifted the trophy, top-scored and was named best player at the European Championship, won two league titles with Juventus, the European Cup (in which he was top scorer), the UEFA Cup Winners’ Cup and UEFA Super Cup. Platini was also the top scorer in Serie A three times in a row despite not playing as a striker. There is an argument for labelling it the greatest period of individual performance in the sport’s history.

In his pomp, Platini was the most dashing playmaker the world had seen, combining all-round attributes with a nonchalance that made everything look unfathomably easy. The vision and accuracy of his long-range passing (watch the first two here and yelp) were unsurpassed, while his skill and flair made dribbling an equally successful strategy. Platini’s free-kick ability and speed of feet will hardly be discussed here for reasons of brevity; both were better than almost any player of his time.

With his continuously untucked shirt and relaxed style, Platini was often criticised for a lack of defensive work. That’s like calling out Mozart for one of his laces being undone while he composed Don Giovanni. In any case, Platini’s contribution through goals alone would render such criticism redundant. He retired with 41 goals for the French national team. Thierry Henry may have managed ten more, but Platini’s came in 51 fewer caps.

The iconic Platini goal (to me, anyway) came for Juventus against Pescara. With the ball cleared from a corner, the No. 10 took it down on his chest. At least 90% of players would have attempted a shot, yet Platini saw something different. He lobbed the ball over the defender’s head, that one touch alone take out five opposition players. Having completed the skill Platini naturally added the finish, sweeping the ball into the top corner.

As with so many iconic players, Platini had a trademark celebration. So often after scoring, one arm would wheel up into the air as he embarked on a darting run. The total joy etched on his face only makes his future conduct more unforgivable. Platini knew how important football could be, and yet prioritised the self over the greater good. Any celebration of his playing career is now inevitably followed by a negative qualifier. From buts to ‘…but’, if you know your French football terms.

I don’t believe that people are born corrupt or greedy, nor that people are ever inherently so. They become so by a mix of circumstance and bad decisions, giving in to the dark sides of human personality that we all share, but mostly keep covered up and out of sight.

For Platini, that circumstance came in 1992. Having rejected an offer to manage Real Madrid after a spell in charge of the French national team, he was instead asked to help organise World Cup ‘98 in France. Had he continued in coaching, or become a sporting director, mediocre businessman or pub landlord, we could be musing as to whether Platini was European football’s greatest ever player.

Having subsequently met and worked alongside Blatter, Platini got a taste for football politics. He voted for the Qatar World Cup, found jobs (coincidentally, of course) for family members which included a sportswear firm with links to Qatar and the composition of the Europa League theme music. “I always vote for what is good for football. Not for myself, not for France,” was Platini’s signature line. That has since proven to be nonsense.

From that wonderful Juventus home shirt with the deep V-neck to a shirt and tie – it’s an unedifying transformation. Platini’s hero status would have been dliuted anyway given his embracing of bureaucracy. We do not expect our flair players to toe the party line, let alone govern it.

Yet Platini went beyond bureaucracy, hiding behind the ‘good of the game’ rhetoric to further his own interests. He became warped by power, one of a large group in the game’s upper echelons who felt it appropriate to serve not the game, continents, countries or supporters, but themselves.

When Blatter’s ivory tower began to topple, Platini continued to promise change. “I am the only one who can ensure that FIFA again becomes the home of football,” he said.”But, whenever I approach the sun, like Icarus, it burns everywhere.” If that’s true, Platini’s own conduct acts as lighter fuel.

“When you have played football at the highest international level, everything in life seems easier afterwards,” Platini told Le Sport magazine in 1987, and therein lies the problem. Platini too easily got swept up in a dirty industry in a dirty world. Like so many before him, Platini entered politics with good intentions but exits stage left in disgrace.

Personally, while I can pull apart Good Platini and Bad Platini, the two can never be truly separated. That his subsequent crimes have been against the same sport that he dominated as a player only makes him more odious.

Yet, to me, he remains an icon. In fact, if we we define that term as ‘a person or thing regarded as a representative symbol’, Platini qualifies twice. He is representative of the great joy a swaggering genius playmaker can exude like no other type of player, but also the greed and corruption of modern football.

“I was born into football,” Platini once said. For a long while we were honoured to let him live there, but not now. For those who wowed at him in 1984, he was their idol. Now he is their bonfire guy.

The chasm between the great joy Platini gave and his damaging of the the sport only increases the disappointment and anger we now feel. He went from being one of us, and became one of them.

michel platini portrait of an icon