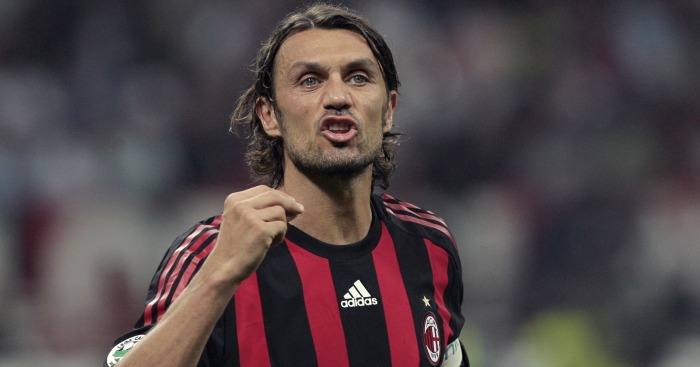 There would be no farewell party, no public procession, no grand farewell. That was not Paolo Maldini’s style. The great defender’s last game in the San Siro was marked by an understated walk around the pitch for one last time, waving to his disciples.

Fifteen months earlier, after a 0-0 draw at Parma marked his 1,000th match as a professional, Maldini was asked for his thoughts on the achievement: “These are numbers which will remain in history – too bad we did not get the three points,” he said. That was Paolo Maldini.

Reputations, as Maldini himself might say, are not formed by what we think of ourselves, but what others think of us. Never has that been more appropriate than on the occasion of Maldini’s last Derby della Madonnina, when Internazionale supporters unfurled a banner to celebrate their great foe. ‘Per 20 anni nostro rivale, ma nella vita sempre leale’ it read; for 20 years our opponent, but in life always loyal. “On a human level, I think it’s one of the most satisfying moments I’ve ever experienced,” Maldini would say.

Maldini might not have revelled in the fuss, but he merited every one of his pre and post-retirement tributes. His longevity is almost unsurpassed, spending all 25 years of his career in Serie A with Milan before finally giving up at the age of 41. No player has made more Serie A appearances, and Giuseppe Furino is the only player to win more Serie A titles with a single club. He is the oldest player to score in a European Cup final, and played 161 European games for Milan. One enjoyable statistic is that only two clubs have won the European Cup more times than Maldini, and one of those is his Milan.

To stay at any club for a quarter of a century is a feat of fitness, but to do so at an elite club requires far more than commitment. While the loyalty of a player to one club is admirable, it is rarely reciprocated. Once a player has dropped below the standards demanded by his team, he will not stay around for long. Only the strongest will survive, whatever your history. Therein lies Maldini’s greatness.

Maldini might not have been the most accomplished defender of all time – although you could certainly make a case – but he was surely the most complete and emphatically the most attractive. Starting out as a winger and then right-back, he was moved to left-back after it became clear that Mauro Tassotti was not for moving. When his pace declined after turning 30 and the role of the modern full-back became far more demanding, Maldini moved to central defence. A team of the last 20 years would probably have him in both positions.

A master of all trades and jack of none, Maldini had all the attributes any manager could wish for. He became famous first for his forward runs from left-back and tackling ability, and then reinvented himself as a central defender who could read the game better than any other of his era. Ray Wilkins, who played with Maldini at Milan, remarked that he could play as a centre-forward and succeed, and was only half-joking.

Andrea Pirlo called Maldini a “machine”, but the term doesn’t quite fit. It is true that he was robotic in the sense of being faultless, but machinery has never looked so sexy. Those piercing blue-green eyes, long hair and tanned skin gave Maldini the aura of Adonis; the Guardian’s Amy Lawrence joked that it was difficult to know whether Italy’s men or women loved him more.

Yet Maldini’s elegance should not act as a blanket over his toughness, but crucially toughness used not as a weapon but a deterrent. “If I have to make a tackle then I have already made a mistake,” was his famous quote after converting to a centre-back, with Alex Ferguson marvelling at how he once watched him play two legs of a Champions League semi-final against Bayern Munich without seeing him slide.

“When I think of the current generation, Lionel Messi is top-level,” Ferguson later said. “Zinedine Zidane was brilliant too but, without a doubt, Paolo Maldini has been my favourite. He has a wonderful presence, competitive spirit, athleticism, and although not the world’s greatest technically, he has influenced all the Milan teams during his wonderfully successful era.” Manchester United’s manager tried and failed to sign Maldini.

With such admirers in high places, it is no surprise that individual honours should follow. Maldini was the first ever defender nominated for the World Player of the Year award in 1995, and twice made the top three of the Ballon D’Or. He was named in a record five different teams of the competition at major tournaments (Euro ‘88, ‘96 and 2000, World Cup ‘90 and ‘94). One of Maldini’s only regrets must have been never tasting international honour with Italy. Final heartbreak came in 1994 and 2000.

If you were going to sculpt the perfect defender, having Cesare Maldini as a father is a good start. Himself a defender and Italy international, Maldini Sr. was fed on Catenaccio between 1954 and 1966. Maldini Jr joined Milan at the age of ten and broke into the first team at 16. The accusations of nepotism soon disappeared when the Milanese watched him play.

“He was very young, so I tried to give him some advice, said the great Franco Baresi on Maldini’s early months in the first team. “But he needed very little; he was already a great player. We were team-mates for 15 years. We read each other’s brain; moved as if we were one person. He could play in every defensive role – extraordinary. Playing with him was a pleasure and an honour.”

Alongside Tassotti, Baresi and Alessandro Costacurta, Maldini formed the greatest defence in the history of the game, winning five titles and three European Cups in nine seasons. If you wanted to organise a back line to take on a team from another planet, those four men in red and black stripes would be your best protectors.

Yet Maldini’s legacy went far beyond that defence under Arrigo Sacchi and Fabio Capello. With Baresi, he was the bridge between Milan’s old and the new, carrying the club on his back and into the future. His vast career means that he won European Cups in three different decades and 18 years apart, not just the backbone of one great team, but many. In Maldini’s first season at Milan he played with Giuliano Terraneo, and in his last with Matteo Darmian. Those two players were born 36 years apart.

Maldini’s ability to adapt and flourish in each new era, under each new manager and with each new teammate, is what carved out his iconic status. He is a pillar of Milan and of the modern Italian game. “Maldini is the symbol of Milan,” as the great Gianni Rivera said. “He brings continuity and he has represented the antique and the modern.”

If longevity and versatility built Maldini’s legacy, his behaviour cemented it. He was sent off once during his career (in a friendly match), and was famously philosophical on suffering even the hardest defeats to swallow. In 2008, Maldini became only the 24th player to be awarded the Order of Merit, the highest honour bestowed by FIFA to those ‘who have made an extraordinary contribution to the development and success of our sport’. As Tommaso Pellizzari, an Italian author (and fan of Inter Milan) wrote: ‘In twenty years he never did something you remember as bad or ugly.’

“Defeat is part of the game, therefore you have to accept it as such,” was Maldini’s own explanation for his calmness through adversity. “I believe, as a sportsman, that defeat is a normal thing. He who has sports spirit has to accept defeat. Only from there you can depart to a new victory. You have to try to avoid it, since we professionals play in order to win, but defeat is part of the game. This applies also in life.”

From those words you could envisage Maldini as a wonderful coach, but he has chosen a different path. After moving home regularly as a child as his father took on new roles, Maldini explains that he would not wish the same upon his sons. Both already play in Milan youth’s teams; it would be impossible for such greatness not to drip down through the generations.

There is always a danger that great defenders will be forgotten, particularly those who didn’t rely on a fist-pumping, chest-beating style. Their highlight reels are far easier to overlook than the goals of great strikers, passes from great midfielders, dribbles of great wingers or saves from great goalkeepers. It is more difficult to notice great defending, and therefore more difficult to remember it. Yet Maldini’s style and elegance ensures that he will never be forgotten, while his humility and kindness means he will forever remain at the heart of a great club, a symbol of Milan and of Italy.

The final word goes to David Beckham, and his answer when asked in an interview for his reasons for playing for Milan.

“The greatest thing about this whole experience has been taking part in Maldini’s career,” Beckham said. “He is a great player, a great captain and a great man.” Find me anyone who refutes that opinion, and I’ll find you a liar.

Chuffed to show off the design of my Portrait of an Icon book, in conjunction with @SBRFoundation.

Milan Paolo Maldini Portrait portrait of an icon Serie A