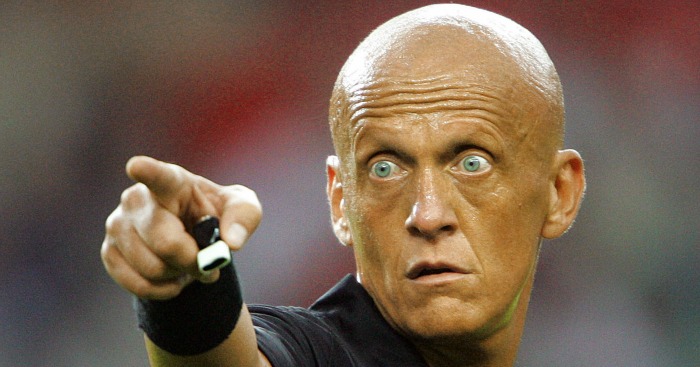 Like control pants, sub-editors, your appendix and the NHS, the conventional wisdom is that referees are at their best when they go unnoticed. Referees are the game’s facilitators, the caretakers who mop the stage and hoover the stalls before the production begins. If your seat in the theatre is clean, you get on with your evening. If it is dirty, you curse whoever failed in their task. Refereeing is the same. Or at least it used to be.

Before the mid-1990s, we hardly knew the names of English football referees, let alone those from abroad. It took a bald Italian from Bologna to change the face of officiating, dragging it into the entertainment industry that was growing around him. Step forward Pierluigi Collina, the most famous referee in the history of the game.

Crucially, he was also one of the best. If Collina’s ubiquity had not been matched by his aptitude, his fame would have become grating very quickly. He took the leading role, but also remained respected and loved. In contrast with the majority of football’s ex-professionals, he is not just heard but listened to. Far too many fail to appreciate the difference.

Named as the top referee in the world for six years in succession between 1998 and 2003 and Serie A referee of the year on seven occasions, there was a time when every showpiece occasion seemed to be under Collina’s authority. UEFA Cup final, Champions League final, World Cup final, Olympic Games final, two World Cups, two European Championships. Tick them all off the list.

Collina had no playing career to speak of, representing an amateur team while studying for an economics degree in Bologna. It brings to mind a quote from Arrigo Sacchi who, when questioned over his own humble playing days before becoming a coach, said: “I never realised that to be a jockey you had to be a horse first.”

Collina enrolled on a refereeing course when aged 17, and quickly moved through the ranks of the profession. Within three years he had moved up to the highest level of regional football, and by 28 was at Serie C1 level. By the age of 32, he was officiating top-flight matches.

The secret to Collina’s success was respect. “You have to be accepted on the field of play not because you are the referee, but because people trust you,” he said after retiring. “This means you can reach the best result a referee can reach, which is to be accepted even when he is wrong.”

Respect for officials is entirely self-fulfilling. If elite players begin to trust your actions and your manner, others will follow suit. If players and managers begin to lose faith in your judgement, every one of your decisions is placed under an unforgiving microscope. Collina went beyond mere respect; he created an aura.

There is no doubt that the Italian’s appearance formed a large part of that aura. Collina’s tall frame and no-nonsense mannerisms continuously took the spectator by surprise, while the complete lack of hair above the neckline made him a striking presence. It came as a result of severe alopecia in his late 20s, causing a permanent loss of hair.

Above all else, it was the eyes. They boggled whenever Collina went serious, like a hamster being squeezed too tightly. His stares were enough to make millionaire footballers feel naked and exposed.

Somewhere, deep inside all of us, is the bad side of our conscience, an innate desire to break the rules. Collina’s eyes are the superhero to counteract these recalcitrant desires. They will seek out your sins, scold them and make them apologise.

“I am a man of the rules,” Collina once said. “For now the only way to deal with problems is by being very, very hard and punishing those that do wrong.” It’s that extra “very” that makes you swallow hardest of all.

If one were creating a disciplinarian Frankenstein from scratch, its development would probably mirror Collina’s own. He was educated by nuns, his mother worked as a teacher and father for the Ministry of Defence. Playing as a central defender in a team of referees post-retirement, Collina has only one boast: “I have never been booked.” It is in no way a revelation.

Yet respect is not simply gained, but earned. Sport demands great sacrifice from its competitors and supporters, and Collina did not believe referees should be exempt from such dedication.

It may not be possible to find a man more committed to his profession. Across the world every day, thousands of people referee matches on a part-time or voluntary basis, while a select few make a career out of it. Collina turned it into a way of life.

His focus became famous. Collina would visit stadiums the day before matches, walking around to take in the sights and smells so as not to feel disorientated in the heat of the moment. He speaks English, Spanish and French alongside his native Italian in order to converse with players. “I think it is enough,” the Italian once said of his multilingualism, offering a glimpse of his humility.

‘In preparation for a match I watch both teams on television at least once. The first thing I try to memorise when I study a game on television is how the teams play, the tactics they use on the pitch, both for defending and attacking,’ he writes in his autobiography. ‘It’s important to understand how their games progress, how the various moves are played out, to observe how they deal with their set pieces, their free-kicks and corners. I then move on to an analysis of individuals, because carrying out a game plan depends on the characteristics of the various players.’ More scouting than many managers. More preparation than many players.

There is a wonderful anecdote from Graham Poll, England’s representative in the 2002 World Cup. Poll remembers being fourth official for Japan vs Turkey, with Collina in charge of the match.

“He drew their line-ups on a board,” Poll says. “He told us how they would play, who the fiery characters were, where the likely flashpoints would be, what each assistant might expect to happen on his part of the pitch. He covered everything. It was incredible. It was preparation to the nth degree. And, furthermore, he wasn’t wrong.” Even among his peers, at the highest level of his profession, Collina was on a higher plane.

The logic is clear. When dealing with inflated egos and supercharged emotions, a referee has a responsibility to also be at their peak. How will they respect me if I am less fit or prepared than them? “The more you know, the better you perform,” is Collina’s own motto.

Flexibility also played a role in Collina’s reputation. He was a keen exponent of the principle that the laws of the game were there to be interpreted rather than blindly administered. Just as every match differs, so too should the nuances in refereeing.

“There is no type of refereeing that works well for all games,” Collina says. “The referee has to develop an almost chameleon-like capacity to be able to adapt his own abilities to the requirements of the match.”

In 2011, Collina was welcomed into the Italian football hall of fame, among the list of inaugural inductees. Sacchi, Marcello Lippi, Roberto Baggio, Gigi Riva, Giuseppe Meazza, Michel Platini, Silvio Piola, Pierluigi Collina. Paolo Maldini and Dino Zoff would have to wait until the following year.

Football refereeing is a thankless task. They have the near-impossible job of balancing strict laws with common sense, and authority without over-dominance. They must manage 22 separate egos, in charge of players sometimes paid more for a week’s work than you are for a year. They are expected to be at the heart of every second of every match without ever becoming the story. One referee has done that better than any other.

Collina was the antidote to everything that had gone before. He adorned the cover of computer games, helped to sell cars and fronted advertising campaigns for Mastercard and Adidas. Over a decade after his retirement, he remains one of the most recognisable faces in the game.

Referees are supposed to be sport’s bad guys, the pantomime villains and the scapegoats. Two sets of supporters go into a stadium with diametrically opposite views, argue amongst each other for 90 minutes and then finally agree that the referee was s**t. For a while, Pierluigi Collina changed all that. He was the teacher it was okay to like, the bad guy you could root for.

Mostly, he was the man who took football refereeing into the modern age, who added a new level of professionalism to the profession. “People probably do not consider referees as athletes,” Collina once said. “But we are.”