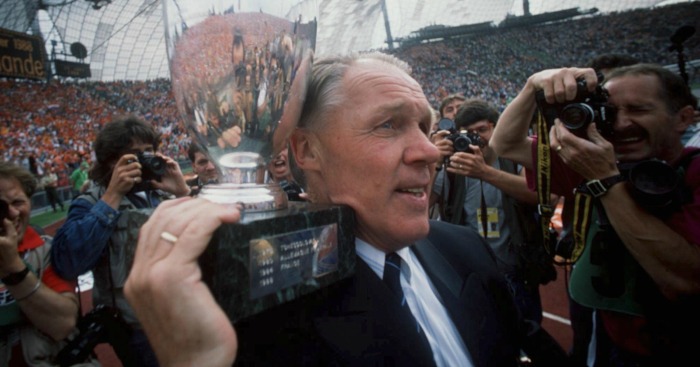 Rinus Michels’ biggest crime may have been increasing expectations. Twenty-five years after leaving the national team for the last time, Dutch supporters are still crying out for his Total Football, or even a pale imitation. His magnificence became a hostage to fortune, Netherlands forever destined to failure in any attempt to blend winning with playing the right way. Michels is the albatross around every subsequent coach’s neck.

Michels is also arguably the greatest football manager of all time. He lifted four league titles with Ajax and led them to the first of three European Cups, won La Liga with Barcelona and guided his country to their maiden major tournament success; little wonder he was named Coach of the Century by FIFA in 1999.

Yet to talk of trinkets is to focus on a fragment of Michels’ legacy. Not only was he “the father of Dutch football”, as Marco van Basten famously said, but also the most influential coach in the game’s history. He sculpted a style of play that came to define a country’s footballing ethos, and implemented strategies that would become commonplace across the world. Variations of Michels’ ideas are still considered visionary today.

As a player, Michels scored 121 goals in 269 games for Ajax, a one-club man in a time before professionalism. He won two league championships, and played five times for the Dutch national team, before back injury cut short his career at the age of 30. Subsequently becoming a teacher and learning his trade at amateur lower-league clubs, it may have been the most timely injury in European football. By 1965, he was in charge of his hometown club.

It is important to point out that Michels did not create Total Football in its entirety. The foundations were laid by Hugo Meisl when in charge of Austria in the 1930s, while Gustav Sebes relied on the same principles in moulding the great Hungary team of the 1950s. Michels played under Englishmen Jack Reynolds and Vic Buckingham at Ajax; Buckingham was an early exponent of player versatility and youth systems. Yet Michels perfected the art, and sold it to the world. Using the advent of professionalism, which allowed him to replace those players who did not fit his vision, Michels formed a squad that he would lead to glory.

The basic principle of his Total Football was relatively simple: Every player must be comfortable in every position on the field, thus creating a fluid formation in which players could fill in for one another. With the full-backs attacking, the idea was to make the pitch as large as possible when with the ball by stretching play and creating space, but press the opposition and reduce the pitch size when out of possession.

“It was about making space, coming into space, and organizing space-like architecture on the football pitch,” said Ajax defender Barry Hulshoff. The opposition would struggle to implement an effective defensive strategy, simply because the opposition’s movement made marking nearly impossible. “The only team I’ve seen that did things differently was Holland at the 1974 World Cup in Germany,” said Carlos Alberto, captain of Brazil’s 1970 World Cup-winning team. “Their carousel style of play was amazing to watch and marvellous for the game.”

“Playing football is very simple, but playing simple football is the hardest thing there is,” as Johan Cruyff famously said, and it is a quote soaked in Michels’ philosophy. His teams were footballing swans, the graceful exterior masking the legs kicking like mad under the water. To describe Michels as a hard taskmaster is an emphatic understatement. A former gymnastics teacher, he required total commitment from each player and his training regimes became legendary. This was a man nicknamed ‘The General’ for a reason.

One of Michels’ first tasks at Ajax was to insist that all players in the squad signed professional contracts. This was not done – at least not solely – to provide greater financial reward to players, but because it allowed him to demand more physical and mental discipline. Any players who did not perform could be told they were not justifying their wage, and thus be moved on. Only those who would commit totally to Michels’ vision would survive what was a monk-life lifestyle in comparison with other clubs in Europe.

“At the beginning of the season we had one week of very hard training: five training sessions a day. It was like a military camp,” forward Sjaak Swart remembers. “When Michels took over, he changed the playing staff considerably, and he changed the training even more,” recalls midfielder Piet Keizer. “His was the hardest physical preparation I ever had. We sometimes had four sessions a day. He also introduced the Italian system of taking the players away for a period of concentrated training before a big match. We would start work in the morning and carry on until the evening.” Football had never seen the like.

While the focus of Cruyff’s Total Football was aesthetics, Michels’ drive stemmed from a desire to be better. That desire evolved not through personal ambitions for fame and fortune, but through a sense of duty.

“I needed to change my approach and needed to make it clear to everyone that even though the players were semi-professionals, money and spectator numbers were at stake,” he said of his early time at Ajax. “And for that they needed to do certain things.”

Despite his demands, Michels’ disciplinarian persona was purely a professional act. He was known as a practical joker and had a wicked sense of humour. Hans Boskamp calls him “a naughty boy”, while Swart recalls an evening meal in a hotel ahead of an away trip: “We were eating at a hotel, when Rinus came in the dining room dressed as an old woman, complete with fur coat. He had just borrowed it from a lady to make us laugh.”

Importantly – and unlike notable modern football managers – Michels was only too happy to give his players credit for their success, shunning the limelight himself. “If I had a tail, I would wag it,” was his humble response when asked for his thoughts on a successful career.

Michels’ results were extraordinary. Having finished 13th in 1964/65, just three points from relegation, Ajax won four titles and three Dutch Cups in six years, were runners-up in the European Cup in 1969 and then won the trophy in 1971. After he left for Barcelona, Michels’ Ajax team would win two further European Cups, while their former manager would bring the La Liga title to the Camp Nou after a 14-year absence.

His work with the Dutch national side eclipsed even these honours, implementing his Total Football with a team that had not qualified for a major tournament since 1938. Aided by the rise of Dutch domestic football on the European stage, Michels’ 1974 World Cup team were arguably the most iconic in the game’s history. If Ajax’s style had not yet taken Michel’s reputation to all four corners of the footballing world, that Dutch team completed the job.

Yet Cruyff is the name and reputation that stands above all others as Michels’ muse and his masterpiece. Natural talent is required for football greatness, but even geniuses need teachers; even visionaries need an inspiration. Cruyff would not be Cruyff without Michels. These are the two pillars of total football and all it created and facilitated.

“It is an art in itself to compose a starting team,” Michels once said. “Finding the balance between creative players and those with destructive powers, and between defence, construction and attack – never forgetting the quality of the opposition and the specific pressures of each match.”

Quite simply, Rinus Michels was the master of that art. Nobody before or since has truly mastered the nuances of football’s complexities, and made them look so simple. Twenty-five years after his retirement and 12 after his death, Michels’ fingerprints can still be found all over some of football’s greatest teams and coaches. In 25 more years, they surely still will.

Daniel Storey – Portrait of an Icon will be released as a book in spring 2017.