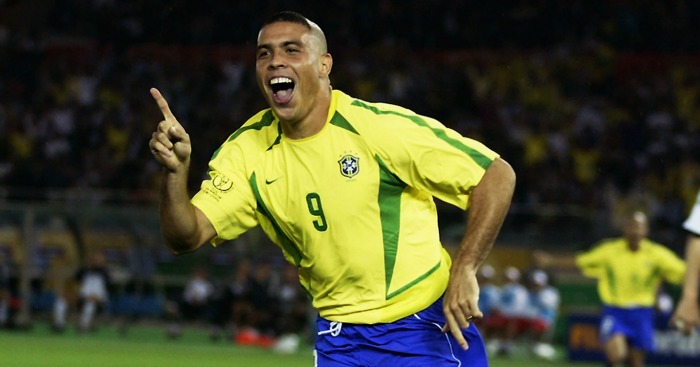 “Imagine you asked God to be the best player in the world, and he listened to you” – Bobby Robson.

It was supposed to be his coronation. As the 1998 World Cup in France drew to a close, Ronaldo was on top of the football world. He had won consecutive World Player of the Year awards and was the reigning Ballon D’Or winner. Immediately after the tournament he would be named its best player. All that was left was to lead Brazil to their record fifth World Cup trophy.

Exactly what happened on the night of July 12, 1998 may never be truly clear. What we do know is that Brazil’s team doctor was rushed by Roberto Carlos to Ronaldo’s hotel room, where the striker was suffering from violent convulsions brought on by angst and nerves. Initially omitted from Brazil’s teamsheet, Ronaldo was then reinstalled into the starting line-up an hour before kick-off, before appearing as a shell of the striker we knew.

Rumours suggested that it was Nike’s influence that forced Ronaldo onto the field in such an incapacitated state, Brazil’s team sponsor desperate for the country’s marquee players to be showcased against hosts France, themselves sponsored by Adidas. A 21-year-old superstar had allegedly become a pawn in a corporate game.

Ronaldo’s four years between the 1998 and 2002 World Cups were largely spent in various periods of rehabilitation, recovering from a ruptured tendon sustained in 1999 and knee ligament injury in 2000. Between November 1999 and May 2002, Ronaldo managed just 17 club games between the ages of 23 and 26, the peak years of the modern striker. Somehow he got himself fit for the World Cup in South Korea and Japan.

Sporting history is littered with great comebacks, but few beat Ronaldo’s for timing. Four years after his farcical night in Paris, Brazil’s No. 9 walked out into Yokohama’s International Stadium scarcely believing he had made it. “I’ve said before that my big victory was only to play football again, to run again and to score goals again,” he said.

Not only did Brazil win the game and Ronaldo score both goals in the final, he won the Golden Boot and was later named World Player of the Year for a third time. Before that World Cup, Ronaldo had not played a competitive international since July 1999. As he sat on the shoulders of his teammates, the Brazilian flag draped around his shoulders, an unthinkable dream had been realised against the odds.

“This gives hope to everyone who is injured,” said Ronaldo’s knee surgeon Gerard Saillant, who had been invited by the player to watch the final. “Even those who aren’t sportsmen, to see that by fighting you can make it.”

There was never any doubt that Ronaldo would be a star. Growing up in Bento Ribeiro and sleeping on a sofa as his family did not own enough beds, all he wanted to do was play football. By the age of 16, he had been sold for $50,000 to Cruzeiro. By the age of 17 he had scored five goals in one league game, had been taken to a World Cup and was sold to PSV Eindhoven. By 20 he was the best player in the world.

On that last point, Ronaldo was merely keeping a promise. “I did not want him playing soccer,” his mother remembers. “What future would he have? I could not accept that my son thought only of a ball. ‘I will become the best in the world, I will be rich and I will help my family,’ he told me.”

Every now and then I catch myself daydreaming of Ronaldo, who combined finishing, speed, skill and strength better than any other player of my lifetime.  He was the textbook in my footballing education. Seeing him so far above every other striker persuaded me, even as a child, that I was watching something and someone very special.

I consider myself truly fortunate to have seen Ronaldo, but also curse that we will never see him play live again – nostalgia just isn’t what it used to be. His was sport played for enjoyment first and achievement second, but the two merged in perfect symbiosis. I can only echo the view of Gabriel Batistuta who, when asked what he thought of Ronaldo, laughed and said: “It is not enough to think of Ronaldo; Ronaldo is football.”

Playing as a striker has become tough in the modern game, with players increasingly asked to carry out a multi-functional role. Ronaldo ruined it for the next generation, because he found it so easy. With the pace of a wing-back, strength of a central midfielder, dribbling attributes of a winger and finishing of a striker, he was the complete centre-forward that could also use both feet, just for fun. Ronaldo was not elegant per se, certainly not by Brazilian standards, but his sheer skill level was incredibly alluring. He was the first of the modern computer game footballers who persuaded you that their skill level and speed in combination was somehow attainable in real life, until you actually got a ball at your feet and tried it. “He’s not a man,” as former Real Madrid striker and general manager Jorge Valdano said. “He’s a herd.”

Ronaldo’s supreme skill actually jars against our expectations. Players are supposed to be getting better in every area, revolutionising the game – or at least taking it forward – through stamina, fitness and professionalism. Yet in terms of centre-forward play, advancement stalled after Van Basten and Ronaldo. They broke the mould.

The best of this generation all bow down to Ronaldo. “As a football player, he was complete. There will never, in my view, be a better player than him,” says Zlatan Ibrahimovic, while Thierry Henry describes how “Ronaldo did things nobody had seen before”. “He was the best striker I’ve ever seen,” is Lionel Messi’s simple assessment.

Even great all-rounders need to have a party trick. Rounding the goalkeeper has become an endangered species, with chipped finishes and early-taken shots preferred to the perceived added risk of dribbling beyond the the last line of defence. It is one of the true open-play individual battles of the sport, its victor decided by the skill of one player to outfox another.

Ronaldo made it an artform. His shoulder drop, shimmy, ball control and speed were all crucial in making goalkeeper after goalkeeper look helpless. But most crucial was the timing. Ronaldo left his burst of acceleration until the exact moment until after he had nudged the ball. That allowed him to push it beyond the goalkeeper’s reach, but not to a point that he wouldn’t ruin his angle for the shot.

Asked in Spain if coaches minded this high-risk tactic, Ronaldo laughed: “If you keep your scoring numbers high, the coach lets you do what you want to do. The way you score doesn’t matter.” He couldn’t be more wrong, because – for those of us watching at home – nothing mattered more. Those goals helped to create Il Fenomeno.

Although Ronaldo’s records at Inter and Real were supreme, it was his year at Barcelona that gave us the greatest glimpse into his true majesty. His 47 goals in 49 games came before Messi and Cristiano Ronaldo normalised exceptionally prolific scoring. His 34 La Liga goals, scored at the age of 20, was a record not beaten until Diego Forlan 12 years later.

“You can go anywhere you want in the world and you won’t find a player who can score goals like that,” said his manager Bobby Robson. “Can anybody, anywhere, show me a better player?” Cue silence.

Yet that season is also tinged with sadness. While Ronaldo’s greatest international moments were still to come, 1996/97 marked the height of his club performance. His was a career skewed towards its start, riddled with serious injuries that made his continued presence at the highest level a near miracle. Ronaldo scored 250 club goals before 23, but only 50 after turning 30. Bobby Robson believes that, without those injuries, we would be discussing the greatest player in the history of the game. Even his weight issues, drawing ridicule, had foundation in illness. Ronaldo suffered with hypothyroidism, a condition that slowed his metabolism.

“To control it I would have to take medication which is considered illegal in football,” he said. “A lot of people should feel bad about their comments on my weight.” There exists a generation for whom correcting ‘fat Ronaldo’ to ‘real Ronaldo’ has become a personal and noble crusade. He deserves better than that.

More than his statistics, Ronaldo was a true Brazilian, a player filled with joy. His toothy smile became as recognisable as his attributes, and his humility afforded him the love of the Brazilian people. When given his first monthly salary, Ronaldo bought a new cover for his old sofa so that it would look nice in his absence, and gave away large chunks of his wealth to charities and causes at home and abroad.

“I don’t care so much about money,” Ronaldo said in an interview with FourFourTwo in 2007. “I don’t spend too much, I’m not stuck with material goods. Sometimes I buy a clock but after a week I have already forgotten about it. So I can’t really answer because I’m not interested in luxury. It’s not what’s important.” It is a cliche of many of the best Brazilian footballers, but he played the game as if enjoying a kickabout with friends. Bernabeu, San Siro, Maracana or a small futsal court in Bento Ribeiro, it was all the same.

“When I was a child I was poor and hungry but I liked what I did,” he explains. “It’s still the same game I loved when I was a boy. When I am on the field, in practice or in a game, it is joy, pure joy.”

That joy manifested itself in every element of his play, from the eagerness with which he picked up the ball from deep to the satisfied grin that marked every one of his goal celebrations. Ronaldo was a footballing pinata, stuffed full of brilliance that rained down with every hit. No party is complete without a pinata.

Alas, Ronaldo’s body was not made for footballing old age. Tears flowed down his cheeks as he announced his retirement at the age of 34. “My career was beautiful, it was wonderful,” he said. “I had many victories. I made a lot of friends. I have to accept my defeats and I’ve lost to my body. I have pain even while climbing the stairs.” The shock was not in his departure from the game, but that his career lasted so long. ‘Thank you, Phenomenon,’ read O Globo’s headline.

Measuring the success of any career is subjective, but almost impossible in Ronaldo’s case. The magic of Pele is that boy wonder became wonderful player became seasoned veteran, hitting every mark along the course. For Ronaldo, this was a career of extraordinary spurts and long spells of heartache, of numerous personal accolades but no European Cups and just four league titles in 18 years.

Yet with Ronaldo, the awards and the prestige never mattered. His injuries add an inevitable ‘what if?’ footnote to his career, but also made him a paragon of brilliance through adversity. As former Brazil coach Carlos Alberto Parreira said: “The story of his life is an example. He had to deal with a lot of suffering and pain, but he always overcame that.”

Against that backdrop, the greatness of Il Fenomeno can never be questioned. All Ronaldo ever wanted was to be the best player in the world, and look after his family. Having done both by the age of 20, the rest was a wonderful bonus that we were fortunate enough to have shared. We may never see his like again.