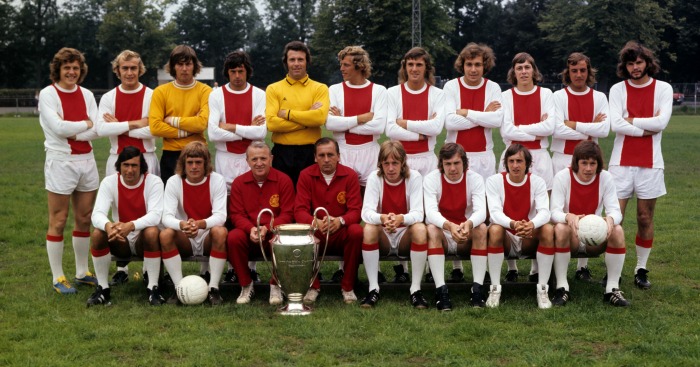 The first in a new series examining some of the most iconic – if not necessarily best – teams in the game’s history. The first ones up weren’t bad, mind…

The background
It would be inaccurate to say that Ajax were nothing before 1965, but they were a club struggling for international relevance and domestic success. Ajax had been the dominant Dutch team in the 1930s, but after the departure of English coach Jack Reynolds in 1940, they had failed to relive those pre-war successes. Bobbing along would be the romantic term, stagnating the more realistic.

Any sojourns in European competition had been short-lived. Ajax were beaten 4-0 by FC Vasas of Hungary in the 1958 European Cup and lost to Norwegian semi-professionals Fredrikstad FK in their next tie three years later. Újpest Dósza knocked them out of the 1961/62 Cup Winners’ Cup, so when Rinus Michels was appointed in 1965, Ajax had only ‘triumphed’ in one European knock-out tie in eight years.

More worrying still, Michels took over a team that had finished 13th in the Eredivisie, two places and three points above the relegation zone. It was this rut that allowed Michels such a blank canvas. Enter the master painter, stage left…

The iconic manager – Rinus Michels
As Jonathan Wilson expressed so excellently in this Guardian article, Stefan Kovacs is unfairly overlooked for his impact on Ajax’s dynasty. Yet there can be no doubt as to the iconic coach of that era; Michels is the pillar not just of Amsterdam and Dutch football, but of the game as a whole.

Named coach of the century by FIFA in 1999, the trinkets and honours – of which there were plenty – form only a fragment of Michels’ legacy. He refined and developed a coaching system so far beyond its time that it would define how his nation played football. He then carried his message to Barcelona and the Dutch national team (three times) after handing over to Kovacs.

Michels was not the ‘creator’ of Total Football. Everything in football is a development or progression from something else, and Michels was influenced by Jack Reynolds and Vic Buckingham at Ajax, Hugo Meisl in Austria and Gustav Sebes in Hungary. His trick was to blend elements from all of those coaches and create a squad that would apply his principles perfectly. Pushing for professional contracts allowed him to sign players he could sculpt in his own image.

The basic tenet of Total Football was that every outfield player could take on the role of every other player, thus making the team an interchangeable unit that would be extremely difficult to defend against. Michel’s team would use the attacking abilities of the full-backs to make the pitch as large as possible with the ball, and make it as small as possible without it. It isn’t hard to see the influences on several modern-day, high-profile coaches.

If the assumption was that Total Football was a question of aesthetics, Michels’ schoolmasterly personality quickly persuades otherwise. A former gymnastics teacher, he required total commitment from each player and his training regimes became legendary, with former Ajax player Sjaak Swart recalling how pre-season training was essentially a military camp.

These demands only work in context. In any industry, ruling employees with an iron fist will only be successful if you have their respect and their belief that your way is the best way. To Ajax’s players, Michels was transcendent. He combined his disciplinarian professional persona with wicked humour and an engaging personality.

The iconic player – Johan Cruyff
It could only be him. Cruyff may have forged his reputation as one of football’s greatest thinkers after his playing career, but he was also the most influential member of Michels’ and Kovacs’ mesmerising teams. Having joined Ajax at the age of ten and made his debut at 17, in eight seasons as a mainstay in the first team Cruyff won six Eredivisie titles, four KNVB Cups and three European Cups, with three consecutive Ballon D’Ors for good measure.

Cruyff was nominally picked as a centre-forward by Michels and Kovacs, and that is at least where he appeared on the pre-match teamsheet. Yet such was his stupendous skill, vision and no little strength to withstand treatment from opposition players, he would roam with deliberate abandon. If that sounds like an oxymoron, welcome to Total Football.

At times it was as though Cruyff had been spliced into many facsimiles. He would pick up the ball in central midfield, and five seconds later receive it to feet on the wing. Five seconds after that he was twisting and turning his ballerina body inside the penalty area to create the space and time that would inevitably lead to a goal. He was the leader of what Hugh McIlvanney called “a cavalry charge of surgeons”, simultaneously the composer, conductor and performer of the most beautiful music football had ever witnessed.

“Without Cruyff,” Michels said, “I have no team.” The vice versa is also true. Such was their talent, Cruyff and Michels would always have achieved greatness separately. Together, they produced miracles.

The iconic game – Ajax 2-0 Inter (European Cup final, 1972)
Ajax became only the second team to win three consecutive European Cups in 1973, but it was their victory over Inter in 1972 that is widely considered the peak of Total Football. Cruyff scored both goals and was named Man of the Match in Rotterdam.

The final was notable firstly because it enabled Ajax to complete a historic treble of league, cup and European Cup, but it was also billed as a battle between the two pillars of European football tactics: Total Football and catenaccio. Inter had been schooled by the great Helenio Herrera during the 1960s and were managed by Giovanni Invernizzi. Their aim was to be resolute in defence and nullify Ajax’s fluidity.

There was no doubt that Ajax were the people’s champions. Dutch newspapers declared the ‘destruction of Catenaccio’, while The Times reported how ‘Ajax proved that creative attack is the real lifeblood of the game; that blanket defence can be outwitted and outmanoeuvred, and by doing so they made the outlines of the night a little sharper and the shadows a little brighter’.

What happened next?
It all came tumbling down, prompted by the departure of Kovacs to the French national team in the summer of 1973. Kovacs was replaced by George Knobel, formerly of MVV Maastricht, who overhauled the laissez-faire man-management approach of his predecessor to the downfall of his club and own employment.

One of Knobel’s first acts was to call a vote for the club’s next captain, a move which he claimed was traditional but led to Piet Keizer winning out over Cruyff. Within minutes, Cruyff was on the phone to Barcelona and had arranged a move. He would play only two more league games for Ajax.

Ajax would be eliminated from the European Cup by CSKA Sofia, finish third in the Eredivisie that season and sack Knobel by the April of his first season. They would not win the league title again until 1977 – after Michels has returned for a season – and would not lift another European trophy until the Cup Winners’ Cup of 1987, when they were managed by… Cruyff. The great man is the aorta of this great club, even after his passing.

Daniel Storey – Want to buy a book on a series quite like this? You need Portrait of an Icon. And it’s for charity.