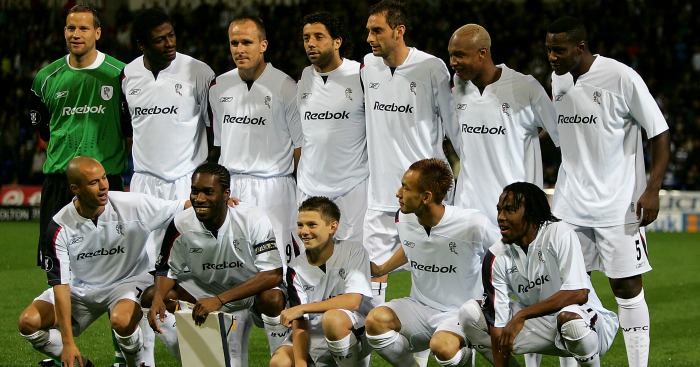 The background
Prior to 2002, Bolton Wanderers had not survived relegation in a top-flight season since 1979. They had become a yo-yo club, finishing bottom of the Premier League in 1995/96 under Roy McFarland and Colin Todd. Todd had guided them to the Division One title in 1997/98 before Bolton were again relegated the following season.

Bolton were a Football League club in a Premier League world, a club with a rich seam of history but having been outside the limelight at the most important time. Their top scorers in the six seasons prior to 1999/00 were John McGinlay (four times), Nathan Blake and Bob Taylor. The team that had lost the play-off final to Watford in 1999 had an established Scandinavian core, but was built on the grit and determination of players like Andy Todd, Neil Cox and Scott Sellars.

Manager Todd was born and bred in Chester-Le-Street, a central defender sculpted in Sunderland but made at Derby County under Brian Clough, where he formed one of English football’s best defensive partnerships with Roy McFarland. His Bolton team were expansive, scoring 100 league goals in 1996/97, but both players and manager had proved themselves incapable of top-flight consolidation. They needed a change.

In October 1999, Allardyce was appointed Bolton manager. Todd had only left the club after resigning in protest at the sale of Per Frandsen, but it was to be a wonderful piece of fortune for the club. Allardyce was forced to sell Todd’s son, his central defender, after he broke assistant manager Phil Brown’s jaw.

Allardyce, who had enjoyed success at Limerick, Blackpool and Notts County, took Bolton from the bottom half and into the play-offs, although they would lose to Ipswich Town. The new manager had impressed the club so much with his methods and ability to create a team greater than the sum of its parts that he was given a ten-year contract. Bolton promptly sold their two best players, Claus Jensen and Eidur Gudjohnsen, for £8m.

It was then that we first saw signs of Allardyce’s off-field strategy. Rather than investing the proceeds of those transfers on lofty fees for replacements, Allardyce preferred to go cheap. He signed Michael Ricketts and re-signed Frandsen for less than £2m combined, and recruited ageing players in Colin Hendry and Ian Marshall to dovetail with new academy graduate Kevin Nolan. Nine months later, Bolton beat Preston 3-0 at Wembley and were promoted to the Premier League for the third time in seven seasons.

The iconic manager – Sam Allardyce
Having successfully trialled his transfer strategy in the second tier, Allardyce went gung-ho in the Premier League. His theory was that Bolton would never be able to compete with other Premier League clubs on transfer fees, and therefore he would look to recruit players for nominal fees or on free transfers, and spend money on the wages.

In Division One, the attractiveness of Bolton to potential players had an obvious ceiling, but that was lifted after promotion. Suddenly Allardyce could scour Europe for players that were going for a song, because they had fallen on hard times, were out of contract or past their peak age. Between July 2002 and August 2004 alone, Bolton signed 15 foreign players on free transfers in 25 months. The turnover was extraordinary.

It would be wildly inaccurate to suggest that all of Allardyce’s foreign legion worked out; he barely even boasted a 50% hit rate. Ibrahim Ba, Hidetoshi Nakata, Mario Jardel, Quinton Fortune, Blessing Kaku, Julio Cesar, Javi Moreno, Bulent Akin and Florent Laville were all expensive mistakes.

Yet that didn’t matter, because amongst the rough, Allardyce found enough diamonds to forge his own crown. Bruno N’Gotty, Youri Djorkaeff and Fredi Bobic were part of his first haul, and their success greased the wheels when it came to persuading their peers. In a period of two years between 2001 and 2003, Bolton signed players from Real Madrid, Marseille, Borussia Dortmund, Hamburg, Kaiserslautern, Galatasaray, Valencia, Paris St Germain, Atletico Madrid, Lyon, Milan, Sporting Cub and Olympiakos. It was a truly groundbreaking period in English football.

The inevitable consequence of this recruitment policy is that Allardyce’s Bolton had an incredibly high average age, counteracted by a constantly revolving door. The team that beat Everton on the final day of 2004/05 to qualify for Europe contained Vicent Candela (31), Bruno N’Gotty (33), Fernando Hierro (37) Stelios Giannakopoulos (30), Jay-Jay Okocha (31) and Gary Speed (35).

Most remarkably of all, it worked. Rather than be stuck with a group of mercenaries with little affiliation to the club who were using the Reebok Stadium as a pleasant retirement home – as many thought – Allardyce targeted players based on their will to win, and chased those like Diouf, Okocha and Nicolas Anelka who had a point to prove.

Bolton finished eighth in 2003/04, sixth in 2004/05 and remained in the top eight for the next two seasons. They were runners-up in the League Cup final, and went through unbeaten in a UEFA Cup group containing Besiktas, Sevilla and Zenit St Petersburg.

Before Allardyce’s Bolton, promoted clubs worked under self-imposed guidelines. Middlesbrough had offered an exception to the framework of buying tried and trusted Premier League experience, but it had proved an unsuccessful model. Bolton went further than Middlesbrough, and made it work. No longer did you need to play it safe. No longer were exotic players exclusively available to elite clubs. No longer were foreign journeymen something to be avoided at all costs.

The Premier League has had very few systematic innovations, but here, undoubtedly, was one. A squad like Bolton’s required a manager with the force of personality to manage their egos and, in Allardyce, they had one. When asked in a 2005 interview how Bolton had been able to land so many high-profile players, Allardyce was sure of his answer: “Me, initially. It might sound big-headed, but I’m the salesman.” What a man.

The iconic player – Jay-Jay Okocha
It could easily have been Ivan Campo, who joined Bolton two months after winning the European Cup. Or Djorkaeff, who was the first real star attraction at the Reebok. Or Diouf, who was tamed – just – by Allardyce after his abhorrent behaviour at Liverpool. Or Fernando Hierro, described by Allardyce as the best passer the club had ever possessed. But really, there can only be one. When Ronaldinho describes you as one of the only No. 10s he admires, you’re a bit special.

Okocha was one of the youngest of Allardyce’s free transfer signings, aged 28 when he joined from Paris St Germain. He had moved to Paris for a fee of £10m following success at Eintracht Frankfurt and Fenerbahce, but was lured to Bolton at the thought of trying his hand in the Premier League.

This was the poster boy for Allardyce’s achievement through deliberate upheaval. He was viewed initially as merely a flair player, capable of the type of skill that could embarrass almost every other player in the league. Yet Allardyce knew that beneath that exterior, Okocha had the stomach for a fight.

The Nigerian may have used skill as an affectation, providing himself and others with the moments of joy that forged his love for the game, but Okocha was also effective. Some may prefer the rainbow flick over Ray Parlour, but Bolton fans prefer the two free-kicks against Aston Villa in the League Cup semi-final second leg.

The iconic game – Bolton 1-0 Arsenal, January 15, 2005
It can only be a victory over Arsenal. If there is one image that Allardyce would cherish from his time at Bolton, it is surely the look on Arsene Wenger’s face as he was forced to shake hands with Allardyce after defeat. Between January 2005 and November 2009, Arsenal faced Bolton in four league games, losing three and drawing one. The first of those came on January 15, 2005, the first time Arsenal had ever lost at the Reebok Stadium.

Allardyce has long rejected the notion that his managerial pragmatism is based solely on aerial football. In fact, he had previously left his role as Preston’s youth team manager as a response to being asked to utilise a long-ball style by manager John Beck.

Instead, Allardyce argued that pragmatism in its purest form was simply the pursuit of the end goal through the route that is most likely to guarantee success. And when Bolton faced Arsenal, Allardyce believed that his opponents, and their manager, did not like it up ‘em. And so it proved.

“If you look at the possession we had in the game and they had it was appalling,” said Wenger after the 1-0 defeat. “We allowed Bolton to play the game that suits them. We gave them their ideal conditions and let them play their counter-attacking football. They sucked us in and played the long ball, but that’s the way Bolton play and they are difficult to beat here.”

Despite playing without a recognised centre-forward, Allardyce instructed Diouf and Stelios to cross the ball into the area almost every time they had possession, telling his midfielders to pile into the box. Set-pieces afforded N’Gotty, Campo and Tal Ben Haim the chance to surge forward, while Allardyce’s other simple instruction was to unsettle Arsenal goalkeeper Manuel Almunia, who had recently replaced Jen Lehmann in goal. Stelios’ winner came from an Almunia flap, and Bolton’s dogged defence thwarted an Arsenal team containing Patrick Vieira, Cesc Fabregas, Robert Pires, Robin van Persie and Thierry Henry.

“We lacked determined effort in the final third and we didn’t show great security in our defending,” was Wenger’s other post-game lament. Three months after their 49-game unbeaten league record had been ended, Allardyce had offered a blueprint of how to get under Arsenal’s skin. Reading back that last Wenger line again, has Le Professeur ever really learned his lesson?

What happened next?
So crucial was Allardyce to Bolton’s success that it was inevitable his departure would cause cracks to appear in the squad. When he left for Newcastle United in May 2007 to be replaced by Sammy Lee, no longer did Bolton have a manager with the strength of personality to keep players in check. Without all pulling in the same direction, Bolton floundered.

Bolton did draw 2-2 with Bayern Munich under Lee’s replacement Megson, but he was an uninspiring managerial appointment to follow an uninspiring managerial appointment. When Megson was then succeeded by Owen Coyle to complete a particularly sour hat-trick, Bolton’s fate was sealed. Allardyce had managed a win percentage of 41.4% throughout his tenure. None of Lee, Megson or Coyle managed better than 33.3%.

Bolton finished 13th in the Premier League in 2008/09, two years after Allardyce left. Incredibly, they finished in the same league position or worse for the next eight seasons in succession. That run will only end at the conclusion of 2017/18.