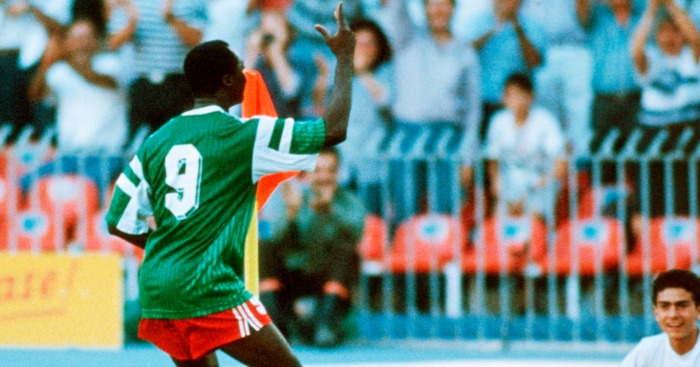 The background
As is so often the case, Pele’s prediction proved inaccurate. He may be the greatest player of all time, but he is no soothsayer. In 1977, Pele claimed that “an African nation will win the World Cup before the year 2000”. He meant it as a compliment, but that prediction hung like an albatross around the neck of an entire continent. Before Mexico ‘86, an African country had never even made it to the last 16. By the start of Italia ‘90, Pele’s prediction looked deservedly farcical.

It is tempting for romantic reasons to believe that Cameroon’s rise came out of nowhere, but the truth is slightly different. A team managed by Jean Vincent were only eliminated from the 1982 World Cup on goals scored after drawing all three of their group games against Poland, Italy and Peru. They were triumphant in the 1984 Africa Cup of Nations under Radivoje Ognjanović and in 1988 under Claude le Roy, losing the final in 1986. Africa may not have been a world force, but Cameroon were its best hope.

Still, this was hardly a squad of household names. Eleven of the 22 played their club football in Cameroon, and ten others in France, although only four in Ligue 1. The exception was Thomas N’Kono, first-choice goalkeeper at Espanyol and surely the greatest goalkeeper Africa has ever produced.

Indeed, much of that team’s iconic status stems from the fact that so little was known about them in England. That is not a question of ignorance, but information. There was no means of watching these players outside of major international tournaments, and that gave teams such as Cameroon ‘90 a mysterious, magical quality. The information age has its drawbacks.

The iconic manager – Valery Nepomnyashchy
If Cameroon’s squad members were unknown to the British public, their coach was unfamiliar to plenty in his own and adopted countries. His story is truly astounding.

As told to the Blizzard in 2014, Nepomnyashchy started his coaching career in Turkmenistan at youth team level, before moving to Russia’s second division. In 1988, after 20 years of coaching which latterly involved trying to gain employment in African football, he was invited to work with Cameroon’s youth teams. Upon arriving in the country he realised that the national team did not have a coach following Le Roy’s departure. With a West African tournament quickly approaching, Nepomnyashchy was asked to stand in, did well and kept the job.

Nepomnyashchy was not well liked or respected until Cameroon achieved their World Cup ‘90 feats. The country’s media were upset at Le Roy’s exit after unsuccessful contract negotiations and wanted a French speaker in charge. Cameroon’s poor performance at the 1990 AFCoN hardly helped.

The Russian’s inability to learn French beyond a few basic words leads to one of football’s greatest (possibly apocryphal) tales. The story goes that in order to deliver team talks before and even during the World Cup, Nepomnyashchy used the services of his chauffeur as translator. However, the chauffeur fancied himself as a tactical wizard, and would therefore change Nepomnyashchy’s orders at his wont. He is the secret hero of this tremendous sporting achievement.

The iconic player – Roger Milla
One of the World Cup’s greatest individual stories. Milla’s truly iconic moment may have come four years later, but in 1990 it was the 38-year-old’s four goals against Romania and Colombia that took the Indomitable Lions further than they had ever dreamed.

Milla’s journey from obscurity to global star is almost as astonishing as Nepomnyashchy’s. The striker had retired from the national team after the 1988 Africa Cup of Nations, but had carried on playing for Montpellier in Ligue 1 until the end of 1988/89, when he decided he had had enough of professional football.

Milla moved to Reunion, near Mauritius, where he played for an amateur team and generally ‘enjoyed’ life. Nepomnyashchy recalls that he spoke to Milla three months before the World Cup, and was told in no uncertain terms that he was no longer a footballer. However, after public pressure and persuasion from Cameroon president Paul Biya, Milla changed his mind. At 38, he was invited back into the fold and put on the plane to Italy.

Milla was never going to have enough fitness to play 90 minutes, but Nepomnyashchy used that certainty to his advantage. Milla was effectively asked to play mini-games and give each one his all. He was introduced in the 81st minute against Argentina, 58th against Romania, 34th in the dead rubber against Soviet Union, 54th minute against Colombia and 46th minute against England in Africa’s first ever World Cup quarter-final. His four goals in Italia ‘90 came in just 235 minutes.

It would be impossible for anyone in today’s game to repeat Milla’s beach-to-pitch trick, but it was astounding even 27 years ago. It was not just Milla’s goalscoring ability that shocked even his own teammates, but his pace with the ball at feet and his physical strength. To have moved from amateur matches and little physical training to the third top scorer at the biggest tournament in the world in four months is the stuff of fairy tale. England’s defenders barely coped with him in the quarter-final, and were hugely fortunate to qualify.

Yet when we remember Milla now, it is the Makossa goal celebration more than the goals themselves. We saw it for the first time against Romania in the last 16, again in that game and twice more against Colombia and Rene Higuita. Milla says that it was entirely spontaneous and that he had never celebrated in such a way before.

That makes me smile. There is unparalleled pleasure to be gained from watching someone on the highest stage, when competitors are supposed to be at their most serious, doing something impromptu that is fuelled by joy. The loveliest aspect of Milla’s dance is not the shaking hips or pointed finger, but the mouth stretched into the widest grin you could imagine.

It may sound incredibly patronising in hindsight, but in that dance African football was encapsulated. Cameroon became iconic not just through their results, but through their style and personality. We respect achievement, but we can only truly love a team when that achievement is blended with fun. Milla didn’t just experience his greatest individual moments on the biggest stage, but he visibly enjoyed every second.

The iconic game – Argentina 0-1 Cameroon (Italia ‘90)
There is a clear argument for opting for the England game here, epitomising not just the Cameroonians’ quality but their flaws. As Milla would later insist, that quarter-final was lost through his team’s insistence on going forward, even when they had the lead.

“We kept going forward because we wanted to entertain people,” he would tell FourFourTwo in 2014. “For us, first and foremost, football was about entertainment, so we wanted to win spectacularly.”

Yet it was the Argentina game, the tournament’s first match on June 8, that truly marked Cameroon’s arrival. Like Senegal’s victory over France in the first match of the World Cup 12 years later, this was the world champions being humbled 1-0 by an unfancied African team.

But this meant far more than 2002. In Milan’s San Siro, in a country where seven of Carlos Bilardo’s squad played their club football, Diego Armando Maradona at al were kept under lock and key by a team of unheralded players from the French lower leagues and the Championnat du Cameroun de football.

Cameroon were the better team by the measure of skill and attacking invention, but there is no doubt about the moment that truly caught the eye. Two players in green had already failed to bring Claudio Caniggia to the floor during his late attempt to haul Argentina back level. The third was Benjamin Massing, and he was not prepared to leave Caniggia’s fall to the ground in any doubt. His flying kick, rather like a clothesline but done with his entire lower body rather than an arm, earned him an inevitable second yellow card.

Had Massing committed his assault against any other country, he may have been roundly criticised by the watching English public. Yet such was the anti-Argentina feeling after Maradona’s handball in the previous World Cup, Massing became a cult hero. Given Maradona’s Scudetto with Napoli ahead of Milan the previous season, the watching Milanese were only happy to follow suit. That night, almost everyone in football was Cameroonian.

Before 1990, African teams on the main stage – particular those away from the country’s north coast – were treated as a joke; think the Zaire free-kick confusion and extend it over a 20-year period. Before 1990, African teams had only won three matches in the first 60 years of this great competition. If every journey begins with a single step, Africa took several in the right direction that evening. No longer could they be derided.

“We hate it when European reporters ask us if we eat monkeys and have a witch doctor,” goalscorer François Omam-Biyik famously said after the game. “We are real football players and we proved this tonight.” They would continue to do so for another three weeks.

What happened next?
The lasting impact was that Africa were immediately afforded an extra World Cup place, although Pele’s prediction came no nearer in France ‘98. Nepomnyashchy left in the November having already decided he would, but failed to gain the job in a major European league he craved and instead embarked on a long journey through Turkey, South Korea, China, Uzbekistan and Russia that only ended last season.

More generally, Cameroon’s performance led to an increase in African players moving to play abroad, including members of that team, and their World Cup ‘94 squad was made up of players from six world leagues. By 1998, that had increased to 11.

Yet the final word must go to Milla, who moved to Tonnerre Yaoundé in Cameroon after Italia ‘90 and stayed there until USA ‘94, when he became the oldest player ever to score at the World Cup. He finally retired in 1996, and was voted Africa’s best player of the previous 50 years by the public ahead of the Confederation of African Football’s (CAF) 50th anniversary celebrations in 2007. History does not record how he celebrated.

Daniel Storey – If you enjoyed that then you will enjoy Daniel’s Portrait of an Icon book. And you get to help a wonderful charity.