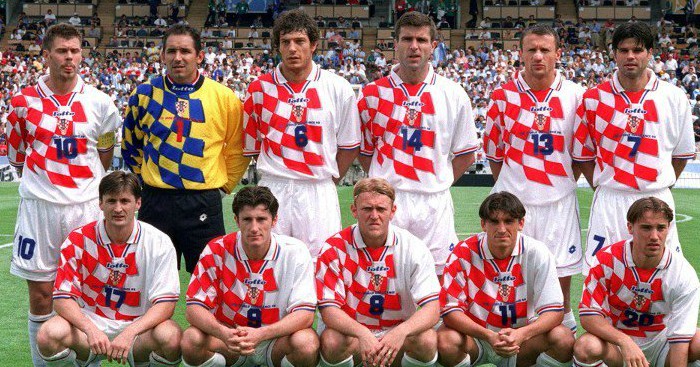 Background
It seems an unlikely time and place for Croatia’s footballing success to begin – four years before the country even gained independence – but in October 1987 Yugoslavia travelled to Chile for the World Youth Championships without any real hope of success. The team that eventually won that tournament against the odds, beating West Germany in the final, contained Robert Jarni, Igor Stimac, Zvonimir Boban, Davor Suker and Robert Prosinecki. Fast-forward almost 11 years, and those five would start Croatia’s first ever World Cup match.

A history of the Croatian national team is a history of this young country, fiercely passionate and strong-willed in the face of adversity. Forced to play under the Yugoslav flag until independence in 1991, Stimac described the hollow feeling of representing a regime that you do not support.

“When I used to play for Yugoslavia it meant nothing,” he says. “It was only sport, nothing else. Now the feeling is incomparable. We were expected to sing the Yugoslavian national anthem but we didn’t want to. Now we can think we are Croatian and we can say we are Croatian. We couldn’t do that before.”

It would be inaccurate to describe this as a team of amateurs from footballing backwaters combining to achieve the unthinkable, for European football had already grown used to plenty of these names. Before Croatia’s first major tournament in 1996, Prosinecki had played for Real Madrid and Barcelona, Suker was highly successful at Sevilla, Boban was half way through a decade at Milan and Jarni had had a (difficult) season at Juventus.

Instead, this was a triumph of strength through adversity, emphatic evidence for football’s power in shaping a national mood and offering hope in the face of despair. While Croatia was fighting a bloody war of independence in which 20,000 people were killed and 500,000 people displaced on both sides, the country’s football team was battling for relevance on the international stage. In 1996, the year after the war ended, they began to make dreams come true. A five-year-old country of 4.7 million people was competing with the best in the world.

For those who believe that sport and politics must not mix, think again. There was Šuker, Jarni and Prosinecki, who had previously competed in a World Cup for Yugoslavia. There was Slaven Bilic, who had never been picked for Yugoslavia because his father was a Croatian separatist. There was Aljosa Asanovic, whose two closest friends had been killed in the conflict.

And there was Petar Krpan, substitute striker in 1998, who had fought in his hometown at the age of 17 to stave off a Serbian attack rather than go elsewhere to continue his schooling. “The only real hero of that generation is Petar Krpan,” captain Boban says. “Because while we were making war in Milan, Madrid, Germany and France, he was a minor in Osijek with a rifle in his hand.”

Too often, we are guilty of overestimating football’s importance in the wider context of geopolitics and war. Yet to Croatia between 1996 and 1998, football was the country. These were heroes not of wartime but peace, standard-bearers for a nation that was desperate to show that it belonged. “We wanted to show that football was still alive, and that we Croats were still alive,” Stimac says. The Croatian team truly were a band of brothers.

To the rest of us, particularly those of us too young to understand the political undercurrent, Croatia were just great fun. We delighted in their inventive, expansive football and the manner in which they seemed to hold no respect for auspicious opponents, taking the mantle from Bulgaria’s wonderful World Cup ‘94 squad. Their supporters, permanently adorned in that iconic red-and-white patchwork design, celebrated through long days and longer nights. During Euro ‘96, they made Nottingham come alive. As a ten-year-old boy, I was captivated.

Yet praising the attitude of the players and fans must not be mistaken for patronising, for Croatia’s on-field achievements deserve the most celebration. Having not won their first competitive match until September 1994, Croatia reached the quarter-finals of Euro ‘96 and then finished third at World Cup ‘98, losing only to eventual champions France having led 1-0.

Ranked No. 122 by FIFA in July 1992, they peaked at No. 4 in 1998. Croatia was being recognised as a country because of its football team, and a once-in-a-lifetime team had arrived at the perfect possible time. Here was a Golden Generation that truly merited that tag.

Iconic manager – Miroslav Blažević
It’s fair to say that Blazevic was a character. He could be sharp-tongued one minute, using agricultural language to dismiss something or someone with which he didn’t agree, and turn on the charm the next.

Never short of an opinion, Blazevic claimed to have invented the 3-5-2 formation in the 1980s and certainly used it to superb effect with Croatia. Such was his dominance over Croatian coaching, the national team continued with the same formation for six years after he left his role.

Blazevic was also a firm believer in astrology, and would receive reports to determine how his team would play on a regular basis. On the afternoon of the quarter-final with Germany in 1998, the latest one came through: ‘Berti Vogts and the German 11 were going to have big problems.’ Maybe there is something in this mumbo jumbo.

Blazevic was always likely to take charge of Croatia post-independence. He was good friends with President Franjo Tudjman, who lunched with the players before that quarter-final, and had to be persuaded personally by the president not to resign before the tournament. During his  four weeks in France, Blazevic carried around a gendarme’s hat as a mark of respect for a French police officer who had been put into a coma by German supporters.

Yet it was Blazevic’s deep loyalty to his players that most inspired Croatia’s success. Members of the squad revealed that he had told them before Euro ‘96 that they were the best team in the world, and it was his constant optimism that allowed Croatia’s players to perform with such freedom even in the most important fixtures. Playing for the pride of a nation is an honour, but it can be a suffocating responsibility.

Iconic player – Zvonimir Boban
Suker can feel hard done by here, given that he won the Golden Boot in 1998 and scored that sumptuous chip over the star-fishing Peter Schmeichel in 1998. So too can Bilic, the hard central defender with the rock star life who epitomised Croatia’s outrageous swagger. And finally Prosinecki, cruelly omitted from the quarter-final against Germany but emblematic of a team that played for the love of the game and the love of the shirt above anything else.

Yet it can only be Boban. He was the captain of that team at its peak and its most successful player in club football, but he was also the man who most intertwines Croatian football and politics.

In May 1990, when pre-war tensions were at their height, Dinamo Zagreb (Boban’s team) hosted Red Star Belgrade. Red Star’s notorious support went with their team and fought on the streets before the game. In the stadium, any hopes of a match getting underway were eliminated by a full-scale riot.

In the midst of that madness, with players leaving the stadium, 21-year-old Boban attacked a police officer who he felt was unfairly targeting Dinamo fans. It earned him a six-month ban that caused him to miss the 1990 World Cup with Yugoslavia and could have seriously affected his career had history played out differently. Croatia had its sporting hero.

At the height of Croatia’s success, Boban was a majestic playmaker and an integral part of Fabio Capello’s all-conquering Milan team of the early 1990s. He was nicknamed Zorro for his trademark feints and tenacity, but it was his dribbling and passing that made him the perfect midfielder for a Croatia team with steel in defence and creativity all around the final third.

There is a tragic end to Boban’s Croatia story, for it was his mistake against France in the semi-final that allowed them to equalise. Boban had previously requested to come off with injury. He would retire from international football the following year.

Iconic game – Germany 0-3 Croatia, World Cup quarter-final, 1998
Croatia had their blueprint. In 1994, Bulgaria had knocked defending champions Germany out of the World Cup in the quarter-finals. Now, in Lyon four years later, the European Championship winners faced a team they had beaten two years previously in another quarter-final.

Yet the odds were still stacked against them. Croatia had earned their ‘dark horses’ tag by the quarter-final stage, but had never avoided defeat in a match against Germany. Berti Vogts’ side had not been at their best in France, but the assumption was that Die Mannschaft would peak when it mattered yet again.

Croatia were given a huge helping hand, of that there is no doubt. Christian Worns was one of the most reliable defenders in Europe and had been superb in the tournament, but his tackle on Suker earned him a straight red card. It was as if at that moment a tidal wave of self-belief washed over the Croatian team, suddenly aware of their chance for sporting immortality.

Robert Jarni opened the scoring with a shot from 20 yards that was arrowed into the far corner, before Goran Vlaovic offered a mirror image from the right flank. Victory was sealed by Suker, twisting and turning around the six-yard box before scruffily finishing past Andreas Kopke.

Germany had suffered their heaviest World Cup defeat for 44 years, while President Tudjman danced a victory in the VIP boxes. He had taken lunch with the Croatian team before the game, and assured each one of them before the game that they were already ‘Knights of Croatia’ whatever happened in the Stade Gerland.

For Blazevic, vindication for his rampant optimism. “It has to be considered an historic result,” he said after the game, tears in his eyes. “Never has Croatia come so far or done so much.”

“That was the match of our lives,” said captain Boban, just as emotional. “None of us will ever forget it.”

What happened next?
Like so often with a Golden Generation, Croatia’s slump was as accelerated as their rise. Boban and Bilic played their last games for their country in 1999, Asanovic followed in 2000 and Suker, Prosinecki and Stimac all bowed out after an unsuccessful 2002 World Cup. In total, Croatia won just six of their next 23 matches after World Cup ‘98 (and two of those were against Malta). They failed to qualify for Euro 2000, eventually causing the departure of Blazevic.

In fact, Croatia have never truly recovered, save for their starring role in Steve McClaren’s England demise. They are still waiting for a victory in a major tournament knock-out match post-1998, and have won just two tournament matches in total since that heady summer.

We don’t ask you for much, but please donate to charity by buying the Portrait of an Icon book. Thank you.