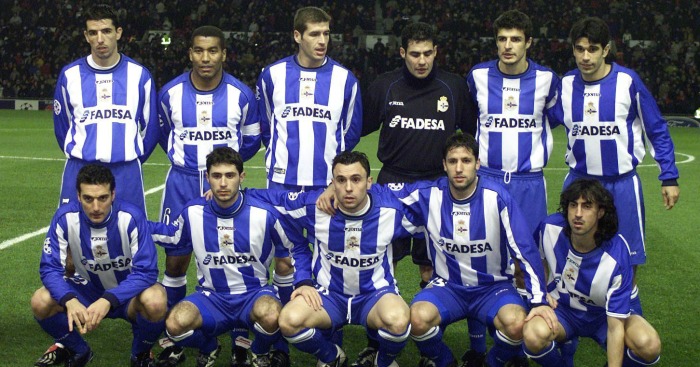 The background
Deportivo had always been a provincial club in Spain. They had spent far more time in the second tier than the first since a period of success in the late 1940s and 1950s, and were relegated as low as the third division in 1980. By 1990, Depor had been outside La Liga for 17 years. There was little sign of progress amidst financial difficulties and mediocre on-field returns.

There is a clear argument, then, to say that Deportivo’s iconic run started as far back as 1992/93, when a team including Bebeto finished third in La Liga two seasons after promotion and qualified for Europe for the first time in the club’s history. The following season, Arsenio Iglesias’ side missed out on the La Liga title on the final day thanks to a missed penalty against Valencia, and they finished second again in 1994/95. It later turned out that Valencia’s players had been offered bonuses by Barcelona if they prevented Deportivo winning the title and thus handing the crown to Barca.

A team containing Rivaldo and managed by John Toshack even finished third in 1996/97, but that season was sandwiched by disappointment. In 1997/98, Depor, coached by Carlos Alberto and Jose Manuel Corralm finished 12th in La Liga. Enter Javier ‘Jabo’ Irureta, stage left.

On a personal level, it was in their 1999/00 season that Deportivo truly landed on my (and I assume a great many others’) radar. At that point, Spanish football was still a slightly mysterious, magical entity. We saw their clubs in Europe and occasionally on Sky, but this was generally limited to Barcelona and Real Madrid with a brief smattering of Atletico.

Between 1984 and 1999, Spain’s big two had won 14 of 15 league titles; Atletico were the one exception. We had been wowed by the Barca of Bobby Robson and Ronaldo and the Real Madrid of Ivan Zamorano and Raul, but those growing up on Sky Sports’ embryonic live TV coverage were understandably coerced into believing that this was, at best, a three-team league.

And then along came Deportivo, a team of wonderful, carefree attackers and English-style defenders who turned Spanish football upside down. An unfancied team from Galicia in the north upset the metropolises of Barcelona and Madrid, and then consolidated that success in Europe.

The 1999/00 La Liga season was utterly ludicrous. The top three in the Pichichi were Salva of Racing Santander, Jimmy Floyd Hasselbaink of Atletico Madrid and Malaga’s Catanha, none of whose teams finished in the top nine positions. Atletico Madrid were relegated, Real Madrid missed out on the top four for the first time in 22 years and Alaves and Valladolid finished in the top eight despite having the second and third worst attacks in the division. The perfect cherry on top of that odd-tasting cake was Deportivo’s title victory despite losing 11 times and winning only five of their 19 away games.

That title victory was undoubtedly Depor’s greatest achievement, but this was not an outlier season. Irureta’s team finished in the top three in each of the next four seasons, but their best form was saved for the Champions League. They reached the quarter-finals in 2000/01 and 2001/02 and the second group stage the following season, but came within a whisker of the final in 2003/04 when Porto’s Derlei scored the only goal of the tie in the second half of the second leg.

There was something fitting about Jose Mourinho ending the Depor dream, only European football’s new pragmatist extraordinaire blunting Irureta’s attack after they had eliminated both of the previous season’s finalists. Deportivo’s manager would blame suspensions, injuries and refereeing decisions in his post-match interview, but there was one line that stood out above the other excuses: “The team with the most patience won tonight.”

That was Deportivo, a team packed with eclectic, endearing footballers who played in exactly the same way against Malaga and Milan. They only came unstuck when tantalisingly close to an unthinkable achievement. Derlei’s penalty was the final line of Depor’s rise, the pinnacle, but far from the final sentence of their story.

The iconic manager – Javier Irureta
Javier Irureta was well-regarded in Spain before 1999, but hardly a household name of European football. He had led Real Oviedo to sixth in La Liga in 1991 and achieved similar results at Celta Vigo. It was that performance at Celta (sixth in 1997/98) with a squad containing overseas stars such as Aleksandr Mostovoi, Valery Karpin, Dan Eggen and Mazinho that led Depor owner Augusto César Lendoiro to bring him to the Riazor.

There is no disguising that Depor’s success was founded on Lendoiro’s extravagant spending rather than Irureta’s management. Foreign players were hardly unusual in La Liga, but Lendoiro created a Galacticos-lite atmosphere of stars recruited on high wages and for significant transfer fees. The title-winning squad included four Brazilians, three Argentineans, Pauleta from Portugal, Salaheddine Bassir and Noureddine Naybet from Morocco, Slavisa Jokanovic from Serbia, Petr Kouba from Czech Republic, Jacques Songo’o from Cameroon and top scorer Roy Makaay from Netherlands. It was a hotch-potch bunch of young hopefuls and experienced heads. Songo’o and Donato played 36 and 29 league games respectively at the age of 35 and 37.

Lendoiro’s spending only increased after Depor’s title victory. Between June 2000 and August 2002 alone the club spent over £100m on new signings, an astonishing amount for a previously non-elite club. Yet their record in the market was exceptional. Their six biggest signings in that period (Diego Tristan, Aldo Duscher, Sergio, Juan Carlos Valeron, Albert Luque and Jorge Andrade) were all successes.

Irureta’s tactics were reasonably simple, but produced glorious aesthetic results. He played with two defensive midfielders, with at least two of Mauro Silva, Duscher, Djalminha and Emerson spanning the half decade of glory. The central striker was the prolific Makaay and later Tristan, ably supported by Pauleta or Walter ‘The Rifle’ Pandiani from the bench. That saves the best until last, a trio of attacking midfielders glorious enough to grace any team in Europe. At its peak, it would always include one certain playmaker…

The iconic player – Juan Carlos Valeron
Given Depor’s greatest achievement and the eclectic nature of their squad, it would seem strange to choose both a Spaniard and a player who arrived after the 1999/00 title win, but this is Juan Carlos Valeron. There will be no dissent.

Were you to ask a football-obsessed 13-year-old for the attributes of his dream footballer, Valeron is the player he would describe. If it is possible to imagine a more louche, attractive version of Rui Costa, Valeron is that image.

Like a Spanish Matthew Le Tissier, it is a well-versed cliche that Valeron would have thrived had he chosen to move to one of the elite clubs in his league, but in choosing to stay at Deportivo and then return to Las Palmas, where he played in La Liga until the age of 40, Valeron rubber-stamped a legend that his insouciant style had already guaranteed.

The iconic game – Copa Del Rey final (2001/02)
Given Depor’s European journey, it would seem sacrilege not to pick a Champions League game. Between 2000 and 2004 there were two wins against Arsenal, three against Manchester United, three against Juventus and two against Bayern Munich, but the crowning achievement was surely the famous 4-0 second-leg victory over reigning champions Milan, overturning a 4-1 first-leg deficit. That night Depor became the first team to overcome a three-goal first-leg deficit in the Champions League.

Like the 1950 World Cup final in the Estádio do Maracanã, the supposition was that Deportivo, like Uruguay, had been invited along to make up the numbers. This was an occasion for football destiny, Real winning a trophy and then having a birthday party in front of their adoring fans.

Irureta’s team burst the balloons, stole the party bags and ripped all the wrapping paper off the pass the parcel. Sergio and Tristan scored first-half goals to stun the Bernabeu, and Deportivo held on against a team including Luis Figo, Roberto Carlos, Claude Makelele and Zinedine Zidane, despite Raul’s consolation. The Galicians had beaten the Galacticos, and they celebrated like wild animals.

What happened next?
Deportivo may have enjoyed four or five anni mirabiles rather than just one, but this was never a project built on sustainable foundations. Londeiro literally paid the price for success, but the owner always knew that such magnificent spending could not be maintained.

Depor’s transfer activity was more one-way entry than revolving door. When asked of his biggest mistake, Lendoiro conceded that the club’s refusal to sell players damaged them: “My big mistake was not to have sold players when I could. But that is the illusion of winning titles.”

By 2004/05, Depor had dropped to eighth in La Liga, and the club’s board had begun a process of shedding key players that eventually became a fire sale. A public statement from Londeiro that the club was intending to focus on youth rather than buying foreign stars was a transparent euphemism for the fact that there was no money left to spend.

By June 2011, just over seven years after that Champions League semi-final, Deportivo had been relegated. They are still trying to shake the yo-yo club tag, having barely survived La Liga relegation in each of the last three seasons.

If Deportivo’s subsequent decline should not be mourned, having basked in the sun having bought that dream holiday, the decline of manager Irureta is more tragic. He was eventually ousted in May 2005 after rumours of player unrest (including being headbutted by Djalminha), and the affair – if not the headbutt – wounded Irureta. He lasted just six months at Real Betis in 2006 and six weeks at Real Zaragoza in 2008, and was overlooked for the Bolton Wanderers job in favour of Gary Megson. As is appropriate, he retired shortly after that slur at the age of just 60.

Daniel Storey – Enjoyed this? Buy Portrait of an Icon: The book, before they run out.