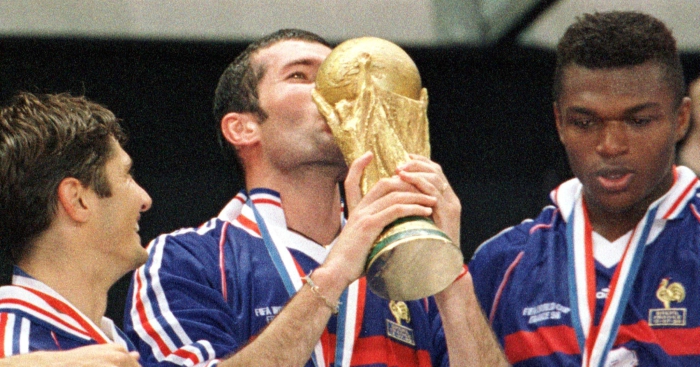 The background
Prior to the World Cup in 1998, France was divided. Unemployment was rising, and economic instability had led to feelings of discord between cultural groups across the country. Racial violence and the growing threat of Islamist terrorism was accompanied by the re-establishment of a far-right movement that had seen the Front Nationale gain momentum at elections in the 1980s. France was, to put it bluntly, the most divided country in Europe.

The football team were not seen as an option as the nation’s saviour. Following the glorious early 1980s team of Michel Platini, Jean Tigana et al, France had failed to qualify for the 1990 and 1994 World Cups and flopped at Euro ‘92; they had endured a decade without a victory in a major tournament match.

Even in Euro ‘96, when France made the semi-finals, they scored only five goals in as many matches. One of those was an own goal and another a penalty. The French had traditionally owned the tag of stylish losers alongside the Netherlands, but by the late-1990s even that tag had fallen off.

And yet, with their country in desperate need of lifted spirits and thus piling pressure on a team who had previously proven incapable of dealing with pressure, France somehow thrived. The ‘rainbow team’, containing players with Armenian, Guadeloupean, Senegalese, Basque and Algerian heritage, won the World Cup for the first time. “This is a France that wins and is, for once, united in victory,” president Jacques Chirac said the day after final victory over Brazil.

Symbolically, France’s victory was not achieved with any great swagger, at least not until the final in Paris. They scored seven goals in their first two group games, but South Africa and Saudi Arabia barely put up any resistance. Jacquet’s team were unconvincing against Denmark and limped past Paraguay in the last 16. They beat Italy on penalties after a 0-0 draw and had to come from behind against Croatia in the semi-finals.

But each of these mini-triumphs through adversity only made France stronger. They suffered injury and suspension, but nothing would get in their path. To most in the squad, this was destiny.

The social power of football can be overstated, and nothing is more unpleasant than sport being used as a manufactured political tool. But as France grew into that tournament, and a French press and public began to believe in its team, a football team truly did unite a population, even if only temporarily.

A squad of players comprising different races and religions came together in harmony and achieved an unlikely triumph; it was impossible not to spread that metaphor to France as a whole. There is far more that unites us than divides us. Nothing quite united France like football and glory.

The iconic manager – Aime Jacquet
From caretaker to king. Jacquet was originally only appointed as caretaker manager after the sacking of Gerard Houllier following the disastrous end to World Cup ‘94 qualifying. Jacquet had been Houllier’s assistant and had worked under him at the French Football Federation’s national technical centre.

Jacquet earned the job on a full-time basis after impressive results in early friendlies, but soon came under criticism for playing a more pragmatic style of football. With a quiet demeanour and a reticence to give wide-ranging interviews, Jacquet came close to losing his job in 1996 but was saved by the promising – if tedious – run to the semi-finals of Euro ‘96, but by 1997 supporters chanted for his sacking and were backed by the press.

Without undermining Jacquet’s extraordinary job, his eventual success was partly thanks to a piece of misfortune – or perhaps fortune – as far back as January 1995. When Eric Cantona kicked Crystal Palace supporter Matthew Simmons and was banned from football for nine months, Jacquet was forced to search for a new playmaker. He settled on 22-year-old Bordeaux midfielder Zinedine Zidane, who had made his international debut five months before Cantona’s kick. Fate can be a cruel mistress, but sometimes she gives with both hands.

Still, trusting youth and moving senior players from centre stage (David Ginola and Jean-Pierre Papin were also both dropped) created pressure on Jacquet. His defensive football was effective, but without a qualifying campaign for World Cup ‘98 to use as evidence, French supporters feared that their team was being left behind by their rivals. Only a month before the World Cup began, the French press were insistent that Les Bleus had the wrong coach in place.

They were proven spectacularly wrong, not least because it was France’s defensive resilience that was the backbone to their tournament success. They could rely on the individual brilliance of Zidane and Thierry Henry, but never before had a country won the World Cup with their top scorer scoring as few as three goals. France kept five clean sheets in their seven matches, including three of their four knock-out games.

Jacquet is an ethereal figure, something forged by his decision to leave his position as manager immediately after the end of the tournament. The World Cup final would be his last ever job in management at the age of 56.

“I want to go to the little clubs, meet the trainers and exchange ideas,” Jacquet said in an interview with Le Monde. He had done what so many of us dream of doing, hitting our peak at precisely the perfect moment before walking off into the sunset, whistling a happy tune.

The iconic player – Zinedine Zidane
‘Iconic’ can mean different things to different people, but Zidane ticks every possible box. He was the poster boy of World Cup ‘98, and of the rise of a new France.

Firstly, Zidane was a truly exceptional footballer, the type of player you find once or twice in a generation. He was talented enough to dominate every match, but intelligent enough to realise that helping ten teammates be better was the most appropriate use of that talent. There was never a hint of superstardom, merely a hardworking man with an extraordinary ability to keep control of a football.

Icons must also perform when it matters most, and Zidane’s was a career defined by moments on the biggest stage. The penalty (yes, and the headbutt) in the 2006 World Cup final, the volley in the Champions League final against Bayer Leverkusen, the two headers against Brazil in the 1998 World Cup final. Each of the ‘thes’ in that last sentence could be italicised, so iconic have they become.

Yet in 1998, Zidane was more than a footballer. He was the personification of the French team, the son of an Algerian immigrant whose face was projected onto the Arc de Triomphe and proclaimed as the country’s new president. He was never interested in political point-scoring, but it is those who stay staunchly apolitical who can have the greatest impact.

The post-war uniting effect on French culture was not labelled as a collective effect, despite Jacquet’s deliberate philosophy of the power of the team. This was ‘L’Effet Zidane’.

The iconic game – World Cup final, 1998
There could be no other serious nomination for this section, but the World Cup final of 1998 was dominated by the performance of a player on the losing team. This was supposed to be the coronation of the best footballer of the tournament and in the world, and Ronaldo’s muted presence sparked rumour and counter-rumour.

Ronaldo’s performance evidently unsettled and affected the display of Brazil as a whole, but the headlines were written by Zidane’s two goals and an emphatic victory for the hosts in front of a desperate audience. It was the joint-biggest margin of victory in the final’s history.

For all his criticism, it was Jacquet that masterminded the win. He identified that Brazil has a weakness at set-pieces and instructed Zidane to make late runs into the box from corners, while asking Christian Karembeu and Didier Deschamps to man-mark Brazil’s two playmakers, Leonardo and Rivaldo.

The reaction to the final became as famous as the match itself. Jacquet described “the whole of France taking to the streets”, and a large proportion of them seemed to pack every crevice of the Champs-Élysées for a night of national communion. They danced, sang, smiled and waved the Tricolore.

“That’s when I realised how powerful sport is,” said 20-year-old Henry, France’s top scorer in the tournament. “Even if I can’t pretend to completely understand it.”

What happened next?
Sport can be a cause of social change, but its effects can only be temporary. Real life soon takes over. Four years after that famous victory united a country, France has been torn apart at the seams again. With a struggling economy and unemployment still rising, far-right leader Jean-Marie Le Pen polled 17 percent of the vote in May 2002 on his predominantly race-related mandate.

“There is a lot of discontent and people living in misery and Le Pen has been able to exploit all the social evils,” Bernard Lama, World Cup winner, told the newspaper France-Soir. “The values we stood for in 1998 have been blown apart.”

As a country struggled to cope with such social discord, its football team fell from grace spectacularly. Having won the European Championship in 2000 and then gone two years without playing a competitive match, France arrived at the World Cup in Japan and South Korea with hopes that Clairefontaine graduates could be the platform for a successful defence of their crown.

France suffered one of the most humbling defeats in World Cup history against Senegal in their first game, drew 0-0 to Uruguay and had Henry sent off in their second match and then lost 2-0 to Denmark to earn the ignominy of making the worst World Cup defence in the tournament’s history.

Daniel Storey – Enjoyed this? Please buy Portrait of an Icon, and support research into treating and beating cancer. Thank you.