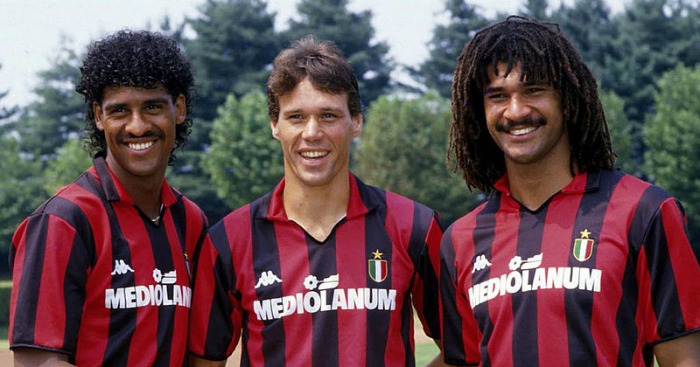 The background
In 1987, Milan were stuck in a rut. Seven years earlier they had been relegated to Serie B alongside Lazio as part of the Totonero match-fixing scandal, and they had failed to fully rebound from that punishment. Having regained promotion for the second time in 1983, Milan had finished sixth, fifth, seventh and fifth in their last four seasons.

Milan’s fortunes changed following their purchase by Milanese businessman Silvio Berlusconi in 1986. Berlusconi had earned his fortune in the construction industry and through his media group Finnvest, using his political connections to form Italy’s only commercial television empire. At the time of Berlusconi’s takeover in February 1986, Milan had won the Scudetto once in 18 years and had failed to even reach the last 16 of the European Cup since 1970.

Berlusconi’s sacking of manager Nils Liedholm and the choice of Arrigo Sacchi as his replacement was a masterstroke, arguably the greatest single decision in Italian football history. Sacchi had a good reputation within the game, but was given his first ever top-flight managerial role and asked to take a pillar of the Italian game back to their former glories. It was akin to Liverpool replacing Jurgen Klopp with Gary Rowett.

There is no doubt that Sacchi benefited from Berlusconi’s investment. In Sacchi’s first full season alone Milan bought Ruud Gullit, Marco van Basten, Carlo Ancelotti and Angelo Colombo, and the following year added Frank Rijkaard. With a magnificent defensive structure already in place, the blend of expensive recruits and groundbreaking technical coaching produced probably the greatest club side in the game’s history.

Strong evidence for that claim is to be found not just in Milan’s success, but the competition within Italian football at the time. Diego Maradona and Careca at Napoli, Zbigniew Boniek and Rudi Voller at Roma, Roberto Mancini and Gianluca Vialli at Sampdoria, Enzo Scifo, Lothar Matthaus and Giuseppe Bergomi at Inter, Roberto Baggio at Fiorentina, Michael Laudrup at Juventus. Serie A in the late 1980s saw the greatest concentration of talent in one league than at any point in the history of club football.

It should come as no surprise – and be considered no criticism – that Milan only ever won the European Cup and domestic title in separate seasons under Sacchi, and did not win that double until 1994. The domestic competition was just too strong.

The iconic manager – Arrigo Sacchi
From selling shoes to feed his family to the zenith of football coaching in 15 years; nothing about Sacchi was conventional. He did for Italian club football what Rinus Michels did for the Dutch 20 years earlier. In an era of rigidity, Sacchi truly broke the mould.

Sacchi’s first element of non-conformism was his lack of playing career, limited to a few regional teams before moving into youth coaching at the age of 26. He worked as a part-time salesman to prolong a coaching career that earned him little money, but remained loyal to his determined dream of developing an attacking system to overcome the defensive excellence of Serie A.

Bellaria, Cesena, Rimini, Fiorentina, Parma, Milan; everywhere Sacchi coached he faced questions about his lack of playing experience. It was not just that Italian coaching was governed by an old boys’ network, but that this country had never seen success from a manager without high-level playing experience.

Vittorio Pozzo, Fulvio Bernardini, Nereo Rocco, Giovanni Trapattoni; Italy’s best had all transposed their playing ability to coaching aptitude. Sacchi was actively avoiding the shoulders of giants. He referred to himself as ‘Mr Nobody’. His strength, Sacchi felt, lay in his difference. As is his most famous quote went: “I never realised that in order to become a jockey you have to have been a horse first.”

Not only was Sacchi the wrong face, he was also intent on implementing a style of play that would set fire to the Italian coaching manual. His Milan side operated with a high line and pressed high up the pitch. They utilised an offside trap and zonal marking, both previously considered blasphemous.

If Sacchi changed the way in which Milan defended, he also changed the club’s mindset as a whole. Rather than the measured build-up play of their peers – and a million miles from Catenaccio – Sacchi instructed his players to play in quick passing triangles to create space which would then be exploited by two of the greatest forward players in Europe. In Sacchi’s first season, Milan scored more top-flight goals than they had for eight seasons. The next year they scored 61 times – a 15-year high.

If Sacchi reinvented Milan’s attack, his greatest achievement lay in implementing that change without undermining their defensive resolve. Milan conceded only 14 times in 30 league games in 1987/88, 12 fewer than any other team. In their 10 European Cup quarter-final, semi-final and final matches when winning the trophy in 1989 and 1990, they allowed only three goals.

Sacchi’s final element of insubordination lay in his methods. He believed in the Michels principle that players should be coached in every role in the team to best understand their teammates’ roles, and would regularly demand that players switched positions in training. It is no coincidence that Rijkaard, Gullit and Paolo Maldini, who all thrived under Sacchi, would switch roles later in their careers and continue to excel.

One of Sacchi’s most famous training methods was ‘shadow play’, where his squad would play an entire training match without the ball. The goalkeeper would start with an imaginary ball, and the team play out different scenarios according to the manager’s instructions.

There is an anecdote about a scout who went to spy on Milan training before an important league match early in Sacchi’s reign, and observed this ball-less farce. When he explained it to his manager, they laughed at the approach. Milan duly won the fixture and kept a clean sheet.

The iconic player – Franco Baresi
In the course of writing this section, I have had heated discussions with others and with myself.

Van Basten is the unlucky loser, the greatest centre-forward of the last 50 years and in many ways the emblem of Milan’s new era. Van Basten scored twice in the 1989 European Cup final victory to be crowned the competition’s Golden Boot winner, won the Ballon D’Or twice during Sacchi’s reign at Milan and was Serie A’s top scorer in 1989/90. It could not have happened without him.

But we cannot ignore Baresi, the leader of the greatest defence the game has ever seen and the one true pillar of Milan. If Van Basten created time through his exceptional movement and first touch, Baresi did the opposite. His reading of the game may never be surpassed. The aggression – and Baresi had that too – was a latent weapon.

Yet Baresi was also indicative of Sacchi’s adaptation of Milan, for his attacking role in that team should not be overlooked. As soon as he turned over possession, Baresi was instructed by Sacchi to look forward rather than backwards or sideways. He believed the moments after winning possession were vital in exploiting uncertainty, and Baresi would regularly push up into opposition territory with the ball. The video below shows it working to perfection.

“At the start I liked [Gianni] Rivera, who I came to know and admire from up close,” said Baresi in an interview with FourFourTwo magazine in 2009. “Then I also liked players like [Pierino] Prati, [Roberto] Boninsegna, and [Gigi] Riva all great champions.” Attacking midfielder, forward, forward, forward. Those are hardly the usual icons of a central defender. Therein lies the Sacchi effect.

The iconic game – Milan 5-0 Real Madrid, European Cup semi-final second leg, 1989
It may seem odd to pick neither the 4-0 dismantling of Steaua Bucharest in the 1989 European Cup final (still the joint-largest margin of victory), the victory over Benfica to retain their trophy or any number of dominant Serie A victories throughout Sacchi’s reign, but the truly iconic win came against Real Madrid in the 1989 semi-final.

Madrid were about to secure the fourth of five straight La Liga titles, and had gone 27 league games without defeat, led by Hugo Sanchez and Bernd Schuster and managed by Leo Beenhakker. The first leg in the Bernabeu ended in a 1-1 draw with the home side taking the lead, meaning that Milan only needed to draw 0-0 to reach the final. There were concerns that Sacchi’s attacking instincts would be his undoing.

There are other Serie A teams, and other Milan teams, that would have opted for that scoreline as the primary aim. Yet Baresi was in no mood for pragmatism. “What we must not do,” Baresi had said before the game, “is play for a goalless draw.”

Milan scored three times in the first half and five in the first hour of the second leg, the type of dominance that had rarely been seen in matches between two elite teams. El Mundo Deportivo described Real Madrid as ‘a puppet in the hands of the Italians’, while Berlusconi would say sorry to his opposite number for the embarrassment of the result. Sacchi would be in no mood for apologies.

Milan would score four times against Steaua in the Camp Nou later the same month, and both games epitomised the joy in this Milan side. Nine goals scored in 180 minutes on the biggest stage, two clean sheets kept by the continent’s best defence. Simply unbeatable.

What happened next?
Like many great artists, Sacchi was a workaholic as well as a visionary. His was a style that was never likely to lend itself to dynasty, and his short temper rendered it an impossibility. He was a brutal taskmaster and infamously stubborn. He created one great team, but had little interest in developing another.

By 1991, Sacchi had fallen out with Berlusconi and several senior players, including Van Basten. He left to take the Italy national team job and promptly took them to the World Cup final in 1994.

Yet the framework put in place by Sacchi would serve Milan well. The coach was replaced by Fabio Capello, under whom they reached three consecutive European Cup finals, won four league titles and even went a full Serie A season unbeaten. Capello truly was standing on the shoulders of a giant.