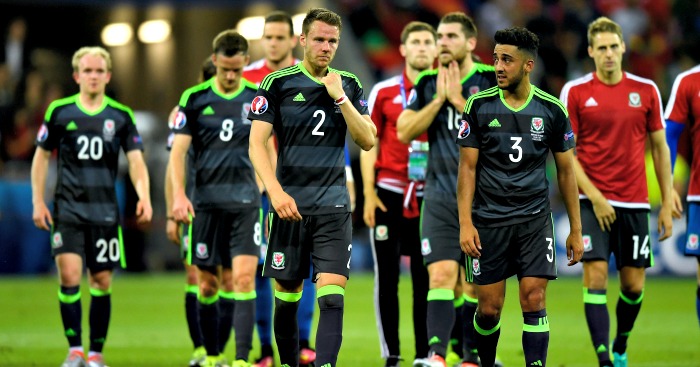 The match had been billed in some quarters as a private duel between Real Madrid team-mates Ronaldo and Gareth Bale, and the Portuguese won it hands down after a cagey and scoreless first period.

Ronaldo scored with a bullet header five minutes after the break and then quickly set up Nani as Portugal ran out convincing 2-0 winners in Lyon.

This has been a tournament where Ronaldo has not been at his brilliant best, scoring only twice in five games and throwing the odd tantrum both with his team-mates on the pitch and the media off it.

But he delivered when it mattered and, when he dispatched Raphael Guerreiro’s cross, it drew him level with Michel Platini’s record of nine goals at the finals of the European Championships.

For Ronaldo, who spoiled his copy book with a second half booking, there would also have been the added pleasure of putting Bale in his place.

The Welshman briefly flickered in the first half, and would have staked a claim for the goal of the tournament if his 50-yard run had ended in the net rather than the arms of Portugal goalkeeper Rui Patricio.

But it was a night when Wales ran out of attacking ideas and Bale constantly found himself crowded by three or four Portugal players at a time.

However, defeat should not detract from what has been a fabulous tournament for Wales, the first time they have reached the last four of a major finals.

Less than five years ago Wales were ranked 117th in the world, yet when the World Cup qualifiers start in September they could be inside the top six.

Both sides had to reorganise after their quarter-final victories with James Collins and Andy King making their first starts of the tournament with influential Welsh pair Ben Davies and Aaron Ramsey both suspended.

Portugal were without midfielder William Carvalho through suspension and the failure of Real Madrid’s Pepe to recover in time from a thigh injury saw Bruno Alves drafted into central defence.

Alves was making his first Portugal appearance since being sent off against England in a pre-Euros friendly for a wild kick on Harry Kane.

Bale would have been hoping to get in a foot race with the 34-year-old, while Ronaldo was keen to pull on to Collins at every opportunity.

When he did so in the 10th minute from Cedric’s cross Ronaldo was convinced that he should have been awarded a penalty as Collins had his arm around his neck.

Collins was fortunate that Swedish referee Jonas Eriksson took a lenient view of the incident, and Ronaldo’s frustration grew during a first half in which he appeared unimpressed by both the service from colleagues and the standard of refereeing.

Bale was at the heart of Wales’ best moments when he dropped deep to try and influence the play, although it was a corner kick routine straight off the training ground which gave him his first sight of goal.

Joe Ledley pulled the ball back low towards the 18-yard but Bale, running back, could not quite wrap his foot around it and the shot was wide.

Bale’s first run of the evening almost set up King at the near-post before that lung-bursting gallop and shot – the first period’s only on-target attempt.

King was breaking into promising positions and Jose Fonte just kept him at bay after the willing Hal Robson-Kanu had shrugged off Alves down the right.

Portugal were neat and tidy in possession without offering a huge goal threat, though Ronaldo gave Wales clear note of his intentions close to half-time when heading wide under pressure from James Chester.

The warning was not heeded and Ronaldo climbed above Chester to give Wayne Hennessey no chance for his 61st goal in 132 Portugal appearances.

Worse was to come for Wales three minutes later when Chester’s clearance fell to Ronaldo 25 yards and his shot was touched home by Nani, who had been played onside by Collins.

Portugal might have had more as Ronaldo flashed over a free-kick and Hennessey caught up with Danilo’s effort as the ball trickled towards the goal-line.

There was a late flourish from Bale with two powerful attempts from distance, as well as a booking for a high foot on Cedric, but the night belonged to Ronaldo and Portugal as they go forward to meet France or Germany in Paris on Sunday.