Home F365 Features Post-Mourinho: What happened next at Porto, Chelsea and… 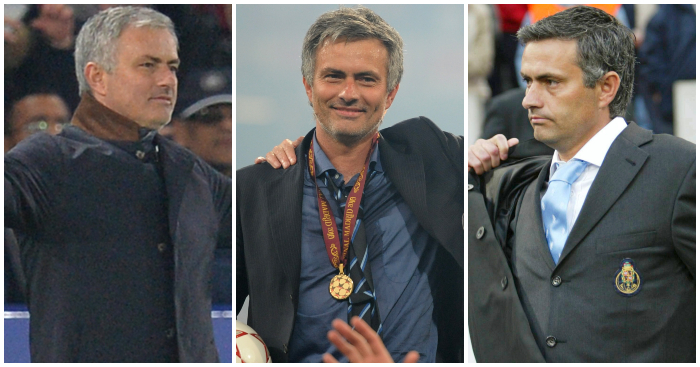 Jose Mourinho has gone. So what now for Manchester United? What does history tell us?

When and how Mourinho left: The manager departed for Chelsea just a couple of days after guiding Porto to a domestic league and Champions League double, a year after claiming the UEFA Cup. What he achieved in his home country is perhaps his greatest accomplishment – it was the first time in 11 years that a club from outside the ‘big four’ nations had won the Champions League, and it was certainly not a remarkable side.

Despite the success he brought, Mourinho’s Porto exit become acrimonious. The club’s president Pinto da Costa resented the fact that his coach had met with Chelsea owner Roman Abramovich and Peter Kenyon in Portugal without informing Porto. His refusal to celebrate the Champions League triumph with his players also grated and led Da Costa to describe the parting as ‘hasty, abrupt and bizarre’.

It went down no better with the fans. Fernando Madureira, the head of Porto’s leading supporters’ group, the Super Dragoes — said to the Daily Mail of their former coach: “He will always be received with total indifference. His attitude with Porto only proves what we already knew about him: that as a coach he is one of the best in the world, but as a person, he’s no big deal. He’s in the top of the coaches, but as a person he’s at the bottom of the list.”

What happened next: Mourinho took Paulo Ferreira and Ricardo Carvalho with him to Chelsea and Deco departed for Barcelona. With the XI that won the Champions League final averaging 27.7 years of age, Porto recruited Ricardo Quaresma, Pepe, Giourkas Seitaridis, Luis Fabiano, Raul Meireles and Diego in an attempt to build on their success, but replacing the manager was a far more chaotic process.

Mourinho’s immediate successor Luigi Delneri was sacked before the season had even begun, owing to the Italian’s poor time-keeping during pre-season; Victor Fernandez was axed in January; while Jose Couceiro was gone after Porto relinquished their Portuguese league crown to Benfica, finishing three points off the pace having scored only 39 goals.

Of that Champions League-winning XI, only keeper Vitor Baia remained at the club beyond the summer of 2005, when Co Adriaanse became Porto’s fifth coach in a year. He only lasted one season, resigning following a reported rift with the board, despite guiding them to the Portuguese double.

When and how Mourinho left: The Blues won their first league title in 50 years during Mourinho’s first season and they retained it the following year. However, cracks began to appear in the relationship between the manager and Abramovich during Mourinho’s third season, when Sir Alex Ferguson’s Manchester United left the Portuguese coach without a league championship for the first time in five years. The FA Cup, achieved by beating United at Wembley, was evidently not enough for the owner.

The tensions came to a head a month into the 2007-08 season. After two draws and a defeat in their opening six Premier League games, a 1-1 draw at home with Rosenborg in the Champions League was the final straw. Reports suggested that during a chance meeting after that match, Mourinho dared Abramovich to sack him. The owner is said to have told his manager that if he wanted to go, then he could. The following day, Chelsea confirmed Mourinho’s departure “by mutual consent” – though the Blues are reported to have coughed up an £18million severance package.

What happened next: Avram Grant, a close friend of Abramovich who had two months previously become Chelsea’s director of football, much to Mourinho’s disgust, stepped up alongside Steve Clarke in what was thought to be a temporary move until a bigger name, such as Guus Hiddink or Frank Rijkaard, could be recruited. But after a defeat at Manchester United in Grant’s opening game and a draw with Fulham in his first home match in charge, Chelsea got their act together.

They lost only one Premier League game after September but it was not enough to deny United of another title. Grant went perilously close to becoming the first manager to win the Champions League for Chelsea but John Terry’s penalty miss in a Moscow shoot-out saw United win their third European Cup.

Prior to taking over at Chelsea, Grant was seen as a lucky coach, with his perceived success with the Israel national team based on more draws than wins. There was plenty of conjecture at the time and more since over what influence Grant had on a dressing room full of characters like Terry, Didier Drogba, Michael Essien, Frank Lampard and Ashley Cole. After an “excellent but disappointing” season, Grant was sacked for failing to deliver any silverware. Luiz Felipe Scolari was then dismissed after six months before Hiddink finally arrived, on a caretaker basis, to win the FA Cup – their first post-Mourinho trophy, almost two seasons after he’d left.

When and how Mourinho left: After replacing Roberto Mancini in 2008, Mourinho won the Serie A title in his first season before winning the Treble in his second year. The day after beating Bayern Munich in Madrid to win his second European Cup, Mourinho said he was “sad, as almost for sure it’s my last game with Inter”. The followed up by saying: “If you don’t coach Real Madrid then you will always have a gap in your career.”

So that’s what he did. Mourinho moved to Real after a world-record compensation package was agreed with Inter, who reluctantly agreed to release the coach after two years at the San Siro. No acrimony, surprisingly.

What happened next: Inter replaced Mourinho with Rafael Benitez after the Spaniard left Liverpool. “One thing is for certain: Benitez won’t do better than me,” Mourinho said in reaction to his successor’s appointment. He was right: Benitez lasted only six months despite winning Inter’s fifth trophy of the year by claiming the World Club Cup by defeating the Congolese side TP Mazembe in Abu Dhabi.

After that win, Benitez moaned that that Massimo Moratti had spent £67million on five players  – “all Mourinho’s first choice” – but failed to keep the promise he made to sign three players before the new coach’s first season. The Inter president was given an ultimatum by Benitez: back him or sack him.

So, with champions Inter in seventh place and 13 points behind Milan, Moratti took the second option. Leonardo inspired an improvement from Inter but they could still only finish second, six points behind their derby rivals. They regained the Coppa Italia but Inter haven’t won a major honour in the seven years since.

When and how Mourinho left: Real won the La Liga title for the first time in four years during Mourinho’s second season in charge, breaking the domestic dominance of Pep Guardiola’s Barcelona. But his third was described the manager as “the worst of his career”.

Real surrendered their title, failing to top the table at any point on the way to a second-place finish 15 points off Barca. They were beaten by Atletico in the Copa del Rey final and Borussia Dortmund knocked them out of the Champions League at the semi-final stage. While Real were struggling, Mourinho was picking fights with his top players. Club captain and icon Iker Casillas was relegated to the bench, while Cristiano Ronaldo was also criticised: “Maybe he thinks that he knows everything and that the coach cannot improve him anymore.”

Does that ring any bells?

What happened next: After the storm, Real opted for the calm of Carlo Ancelotti, with Zinedine Zidane and Paul Clement appointed as his assistants. Gonzalo Higuain and Mesut Ozil were sold, while Real made Gareth Bale the world’s most expensive player, with Isco also arriving.

The changes led to little improvement in La Liga, with Real slipping to third with themselves and Barcelona bundled aside by champions Atletico. A Copa del Rey triumph kept the heat off Ancelotti before the Italian coach delivered to Real what Mourinho could not: la Décima.

More success followed in the form of the Club World Cup which was sealed with their 22nd consecutive victory – a new Spanish record. But Ancelotti’s side again failed to topple Barca domestically and Copa del Rey and Champions League failures led to Ancelotti courteously being shown the door.

Upon Benitez’s subsequent appointment, the Spaniard’s wife said: “Real Madrid are the third of Jose Mourinho’s old teams Rafa has coached. We tidy up his messes!”

Mourinho took that as well as you might expect. “The lady is a bit confused, with all ­respect,” he said after being re-appointed by Chelsea. “I’m not laughing. She is confused because her husband went to Chelsea to replace Roberto Di Matteo and he went to Real Madrid and replaced Carlo Ancelotti. The only club where her husband replaced me was at Inter Milan, where in six months he destroyed the best team in Europe at the time. And for her also to think about me and to speak about me, I think the lady needs to occupy her time, and if she takes care of her husband’s diet she will have less time to speak about me.”

When and how Mourinho left: After a first season of transition with Chelsea finishing third, Mourinho won his third Premier League title in 2014-15 after losing just three games all season. The Blues also won the League Cup and appeared all set for another spell of domestic dominance after Mourinho committed to a new four-year contract.

But just as it did at Chelsea previously and with Real Madrid, Mourinho’s fortunes nosedived in his third season in charge. The Blues collected just 11 points from their first 12 Premier League games and by mid-December, nine defeats in 16 matches left them two places above the relegation zone.

The players that worked for Mourinho to bring him the title seemingly downed tools to get him the sack seven months later. Chelsea’s technical director Michael Emenalo admitted the bond between the manager and his squad had broken.

“Whilst there is huge sentiment for the individual who has done so much for the club, the fact of the matter remains that Chelsea Football Club is in trouble,” he said. “There obviously seems to be palpable discord between manager and players, and we feel it was time to act.”

What happened next: Abramovich’s chief firefighter Hiddink was brought back for another stint until the end of the season and magically, the Chelsea players immediately embarked upon a 15-game unbeaten run in the Premier League.

That streak was ended immediately after it was confirmed that Antonio Conte would be taking charge in time for the start of the following season. Hiddink restored some stability and Chelsea earned a top-half finish, ending the campaign in 10th place but Conte would be taking over a side deprived of European football.

That worked in the new manager’s favour. Without any distractions and £118million of squad reinforcements including N’Golo Kante and David Luiz, Conte changed Chelsea’s system and brought the title back to Stamford Bridge in his first season. Only an FA Cup final defeat to Arsenal deprived him of a Double.

Then, once again, Chelsea failed to build on that title success, with Conte gone after two seasons. Maurizio Sarri is here to change all that.