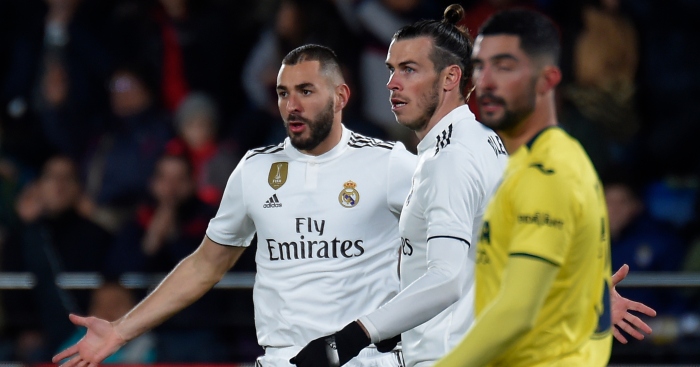 Before the winter break and their trip to the UAE for the Club World Cup, Real Madrid sat just five points behind leaders Barcelona. After a nightmare start to the new year, that gap is now ten points, and faint hopes of a title challenge have been all but extinguished.

The initial bounce that followed Santi Solari’s appointment as manager seems to have evaporated, and spirits don’t appear to have been raised by a fourth Club World Cup victory in five years.

The malaise that has afflicted their league form over the past season and a half is showing no sign of abating. So what exactly is the problem at the Bernabéu?

Is it just that they are missing Cristiano Ronaldo? Well of course they would miss someone who averages more than a goal a game in La Liga. A player of his ability is nigh-on irreplaceable, and the likes of Gareth Bale, Karim Benzema and Mariano Díaz have not chipped in with anywhere near enough goals to make up the shortfall. As a result, Real Madrid have scored just 26 league goals so far this season, just over half the number scored by eternal rivals Barcelona. The key difference between those two sides is that in Lionel Messi, Barça still have their cheat-mode player, but Madrid no longer have theirs.

So if the problem stems from a failure to replace Ronaldo, then surely president Florentino Pérez must take his share of the blame. He may be the architect of the ‘galáctico’ policy, but in the last few seasons he has been uncharacteristically reticent to splash out on superstar names. That’s not to say he hasn’t spent money – the likes of Thibaut Courtois and Vinícius Júnior didn’t come cheap – but the signings of James Rodríguez and Toni Kroos in 2014 were the last that could seriously be considered worthy of the galáctico tag.

But would another big-name signing solve the problem? Perhaps not, but it would undoubtedly lift the morale of the fans, who have been staying away in their droves lately. The Bernabéu was only two-thirds full for Sunday’s dismal defeat to Real Sociedad, and that wasn’t even their lowest attendance of the season.

The right signing in the right position would certainly help make up the goalscoring deficit. There have been strong links with Eden Hazard and Christian Eriksen (who would apparently cost £224m), and either would be a step in the right direction, but neither man is a prolific goalscorer. They are both supremely talented, capable of the spectacular, and would surely thrive on the highest stage, but the need for a 25-plus goal per season striker would still remain.

In any case, even with Ronaldo’s departure and Florentino’s failure to invest in a serviceable substitute, a squad so replete with talent should be doing much better than they have been. Either the players haven’t been up to it, or the manager hasn’t been able to get the best out of them. Perhaps it is a combination of the two.

Luka Modrić places the blame firmly at the players’ door. “There are many players who aren’t playing at their highest level, starting with me,” said the Ballon d’Or winner after the defeat to La Real. “The manager is doing a good job and prepares very well for the games, but he cannot score the goals himself.”

Even if Modrić absolves Solari of blame, there are doubts among fans and pundits over the Argentinian’s qualities as a manager. Despite having been given a permanent contract, there is still a strong whiff of transience about him, as if he’s merely keeping the seat warm for the next guy.

The fact that Zinedine Zidane and Julen Lopetegui also struggled in the league with more or less the same set of players suggests it’s not all his fault, but his lack of experience is telling, and after an excellent start, the magnitude of the task has now been made plain.

What is clear is that there is no one single reason for Madrid’s troubles, but a number of coinciding ailments that all contribute to the wider disease.

So what is the remedy? Do all the eggs go into the Champions League basket once again? On the face of it they have a relatively favourable draw for the last 16 in the shape of Ajax, but the Dutch side should not be underestimated, particularly by a team that lost twice to CSKA Moscow in this year’s group stages.

Last season’s European success glossed over a pretty dreadful domestic campaign, and while another Champions League win this year would be a huge achievement, it may continue to mask deep-rooted issues that need resolving.

Real Madrid’s problems may seem petty when compared with the plight of other teams, but this is no ordinary club. The standards and expectations at Madrid are so high that a run of poor results constitutes a crisis, and this season there is a very real prospect of no silverware and a potential failure to even qualify for next year’s Champions League.

The fact of the matter is that Barcelona haven’t even been particularly good this season, but Madrid have been so poor that they haven’t needed to be.

It may sound ludicrous given their enormous success in recent years, but what is needed is a root and branch review, with new blood in every aspect of the club. They need new players to phase out the aging stars and support the young pretenders, a new manager with a proven pedigree and distinct philosophy, and maybe even a new president to facilitate the changing of the guard and reject the short-termism of the Pérez years.

A failure to change will prolong the stagnation, and standing still is the fastest way of moving backwards. A collective reboot is needed to push the club forward into the post-Ronaldo era.