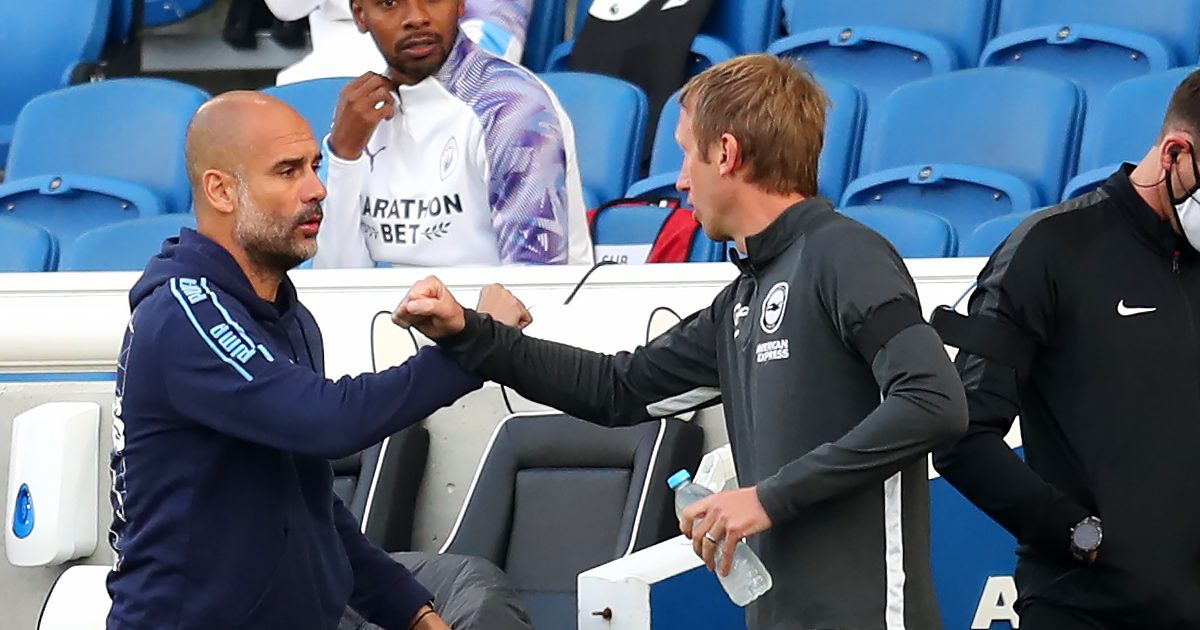 Graham Potter has insisted that there are no hard feelings between himself and Manchester City boss Pep Guardiola after their confrontation earlier this year.

Potter was involved in a touchline spat with Guardiola in May. This came as Brighton came from behind to beat Man City at the AMEX Stadium.

Guardiola was not happy how the Englishman celebrated his side’s 3-2 victory over City, who were playing with 10-men.

Potter later apologised and the pair shook hands afterwards but Saturday’s clash between the two clubs at the same venue will be their first meeting since.

Potter said: “It was the first goal. It was a poor reaction from me – an unintentional one, but still a poor one.

“Unfortunately I’m a human being that’s not perfect. I’ll shake his hand and hopefully he’ll give me a cuddle, but sometimes these things happen in life.”

Brighton, who were involved in a relegation battle last term, have carried the spirit from that match into this season.

After eight games the Seagulls are sitting fourth in the table and have lost just once.

Potter said: “You know anything is possible but if you had said at the start of the season you would have 15 points from eight matches we would certainly have been happy with that.

“It is a good start but it is only a start. If we’re talking about the same points ratio in 30 matches’ time then of course I’ll be a lot more excited than I am now.

“Now we’ve got a really big week with some great challenges ahead but we at least face them from a decent foundation.”

Defender Adam Webster is back in contention this weekend after missing the last five games in all competitions with a hamstring injury.

Potter said: “Adam Webster has been training this week, so that’s good news. He’s had a good week’s training and there’s an outside chance he could be available for the squad.

“We’ve got good competition now we’ve got three matches in a week so there will be opportunities for guys to play.”